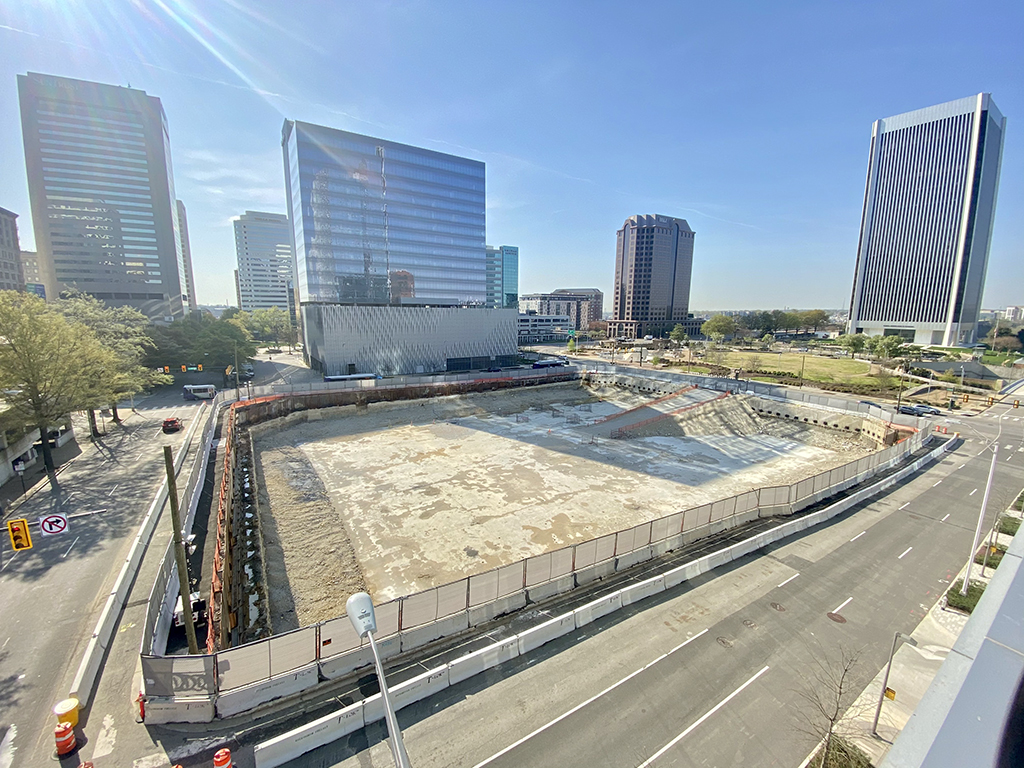 The pit left over from the implosion of One James River Plaza. (Courtesy of Dominion Energy)

Dominion Energy won’t be adding another tower to the downtown skyline after all. Blame the pandemic and Warren Buffett.

The Richmond-based utility giant confirmed on Friday it has for the foreseeable future decided to scrap its plans for 700 Canal Place, an office building it has had on the drawing board for several years for the site of its former One James River Plaza building.

The decision comes nearly a year since the 21-story One James River Plaza came crashing down in a plume of dust via implosion, leaving a massive pit at 701 E. Cary St. that’s since been cleaned up and leveled out while awaiting a decision on 700 Canal Place.

That decision came last week and was driven by two factors, according to the company: the recent sale of its natural gas business to Warren Buffett’s Berkshire Hathaway, which shrunk Dominion’s downtown headcount, as well as realizations it has had about the staying power of work-from-home flexibility for its employees brought on by the pandemic.

About 300 of Dominion’s downtown employees were sent to Berkshire as part of the $8 billion natural gas deal. Those workers have since relocated to Reynolds Crossing, where Berkshire leased a big block of office space. 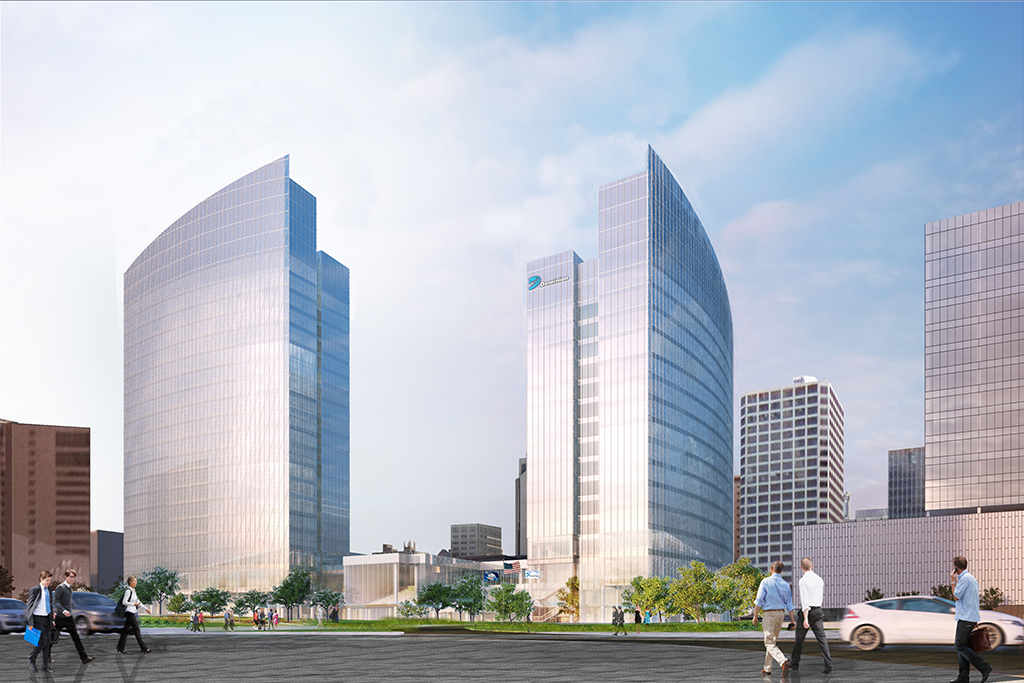 A rendering of the two towers. The one to the left, 600 Canal, has been built but 700 Canal on the right has been scrapped. (BizSense file)

Add that to the fact that the company has decided that working from home will be a fixture for some time. About 35 percent of its workforce, including the bulk of its 2,500 downtown employees, are still working from home and won’t come back in larger numbers until at least July.

“With a reduced headcount in our downtown workforce due to the sale of substantially all of our Gas Transmission & Storage businesses and in anticipation of more flexible work schedules for those employees who have proved to work remotely both effectively and productively, we are continuing to update workplace plans and policies for all of Dominion Energy, in anticipation of returning to our workplaces when it is safe to do so,” Carter Reid, president of Dominion Energy Services said in a prepared statement.

Dominion said it has informed the city of its decision not to build the second tower. The company said it will fill the hole at 701 E. Cary St. and is weighing its options for what to put on the site. Those options do not currently include selling the parcel to a developer, the company said. The plan of development for 700 Canal on file with the city is valid for five years.

Richmond-based Hourigan and Chicago-based Clayco — the two companies that built 600 Canal — had initially been retained as the general contractors for 700 Canal. Houston-based architecture firm Kendall/Heaton Associates was the architect of record for the planned tower. Timmons Group was the civil engineer, plans show.

Dominion continues to utilize its other downtown offices, including the 20-story tower at 705 E. Main St. and three buildings at 120 Tredegar St. along the river.

Another piece of its local real estate portfolio that’s in flux is a 12-acre piece of its Innsbrook compound at 5000 Dominion Blvd. The company listed the land for sale last year and as of December had a deal in the works to sell it to a developer for a mix of apartments and townhomes.

This new Dominion tower was supposed to be a key contributor to the TIF overlay for Navy Hill. Just more evidence of what a house of cards that proposal was.

I don’t understand that comment. But the Navy Hill project is long dead since Henrico has picked it up and is building it in the county. Apparently Henrico officials believe it is a very viable project.

Michelle is referring to how much Dominion’s CEO at the time, Tom Ferrell, was pushing for Richmond to build a new Coliseum. His groups logic was that their second Dominion tower alone would provide substantial funding in the TIF district drawn. If Richmond had moved forward that part of the TIF proposal would not be there and therefore we really would be in a bad place. It’ll be interesting to see where Henrico lands, because the part of the project that will make money is the office and residential development. Any notion that an arena makes money just isn’t true.… Read more »

We wouldn’t have a dime less today than we do now if we had accepted the Navy Hill proposal.

It’s amazing the misinformation campaign that went on with Navy Hill.

Ultimately, the bonds would have become the responsibility of the public entity if the private sector had failed in its obligation. The additional taxes on the multiple surrounding blocks would have slowed further growth for decades. Gratefully, we’ll never know how that gamble would have played out.

Another point of misinformation. Taxes were not going to be raised on the properties within the TIFF. Only the taxes on the increases in value would have been used. I believe there was also an agreement that Dominion was to build the second tower as part of the deal. So essentially not only did the City miss out on a Coliseum, but the missed out on a second tower as well. But you’re right there are never any repercussions to treating people the way the Council did on that.

If it sounds too good to be true, it probably is. Few developments end up being as big/bold as promised and a good developer doesn’t need to pressure the city into its vision. Never mind how narrowly written the RFP was. At the end of the day there was a huge risk the bonds would end up in default and a large chunk of downtown could be neglected.

What’s to say if the TIF was approved that Ferrell would not have gone ahead and the building be half completed by now? It was a no-brainer when they killed Navy Hill that the building wasn’t going to happen. When someone get’s kicked around they tend to take their ball and go home.

They also cut out $540k in yearly real estate taxes by demoing the existing tower.

Any notion that an arena makes money just isn’t true

That was the entire problem with the concept, all the gaslighting about how he city “needed” an arena.

A very valuable component of the Navy Hill proposal was recently approved which will clear two decrepit blocks, realign an important road, and become an office tower, mostly pre-leased and at no public risk or additional real estate taxes for the surrounding blocks. It’s become a win-win for the City. Granted, we still have that rusty monstrosity of the Richmond Coliseum to raze.

that’s too bad, it would have been a good addition to the city skyline

The kicker is now there’s a “missing tooth” on the city skyline!

Well I’m sure we will soon get a proposal for a combination food hall/weed drive through/casino on the site, funded by tax payers. Which will collapse in 6 months and then be built in Henrico with no tax payer funding.

The Richmond Bizsense readership may not appreciate your wry sense of humor, Ed, but I do. This lot likes to downvote everything, which I’m sure they’ll do to this comment as well.

They coud have been any flavor they wanted, and they choose salty.