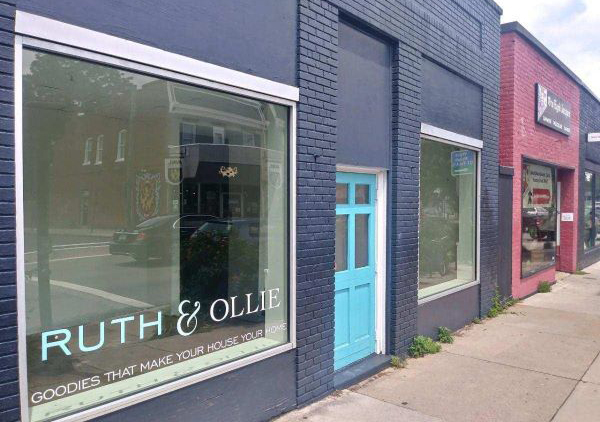 Lineage, a Harrisonburg bags-and-accessories store, is planning to open a second location in a portion of the space formerly occupied by Ruth & Ollie in Carytown. (Jack Jacobs photo)

A Harrisonburg bag-and-accessories store is coming to Carytown for its second location, and its owner and his family are packing their bags for Richmond as well.

Lineage, which primarily sells waxed canvas and leather bags made in its own workshop, has signed a lease for about 3,500 square feet at 3106 W. Cary St.

Owner Paul Hansbarger, a VCU alum, said a Richmond store has been part of his expansion plan for several years, in part due to the customer base that Lineage has developed here. He’s also moving his family to the area, and said the company’s headquarters will accordingly shift to the River City.

He said the Harrisonburg location, which features a workshop and store, will continue to operate.

“We have a lot of repeat, loyal customers from Richmond who order online and who trek out to Harrisonburg to visit the store,” he said, adding that he has regularly participated in markets and craft shows in the Richmond area since he launched Lineage in 2016.

The Northern Virginia native first learned to sew at the Visual Arts Center of Richmond on Main Street, so the Carytown store is a homecoming of sorts.

“I just thought it’d be fun to learn how to sew. I made a pin cushion and pencil pouch. Really basic and entry level stuff. But later on I used those skills to make bags,” he said.

In addition to tote bags, backpacks and luggage, the company also sells house-made candles as well as a range of home goods, clothing and gifts from third-party vendors that range from small-time artisans to international boutique brands.

Though the Carytown space will have a workshop, it will be primarily geared toward retail, owner Hansbarger said.

“We certainly are going to continue the product offerings we have (in Harrisonburg). We might expand in certain areas that feel like a better fit for the Richmond market,” he said.

Hansbarger expects to hire four or five people to staff the Carytown location. He declined to disclose his investment in the Carytown store.

In other Carytown moves, Texas chain Torchy’s Tacos is among the latest to ink a lease at the Carytown Exchange shopping center. The owners of Citizen Burger Bar and AlterNatives Boutique recently became their own landlords.