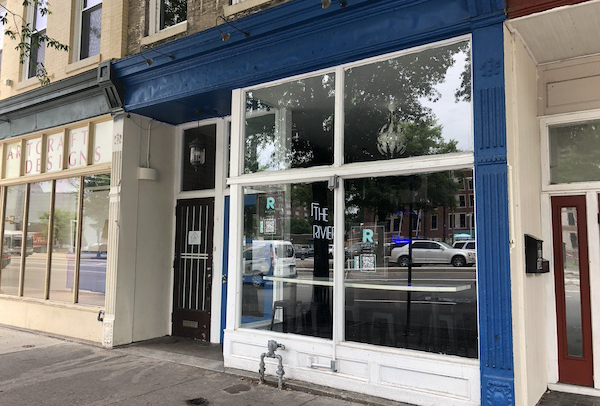 The Riviere restaurant and bar is planning to open next month. (Mike Platania photos)

The storefront at 506 W. Broad St. has seen restaurants with Filipino, Japanese, Tex-Mex and new American cuisine come and go over the years. Now, after 12 months of dormancy, the table’s being set for a new venture in the space.

In July, Javontae Jones is planning to open The Riviere, a bar and restaurant concept in the spot previously home to Yaki, Boka Tavern, Belvidere at Broad and, most recently, Tiny Victory.

A Richmond native who also owns events and entertainment business True Society Events, Jones said he hopes The Riviere is the first step toward his bigger ambitions.

“This is my first sit-down restaurant. It’s definitely something different for me,” he said. “My honest life-long dream is to open a big night club. But I’m starting here to learn everything. Hopefully, this is just the beginning.”

Jones said The Riviere will serve bar food like burgers, wings and steaks and have an extensive cocktail menu. The new restaurant will also offer brunch every day it’s open on Wednesday through Sunday.

Jones said he’d heard of the space being vacant and went out to see it for himself. Once he got there he ran into the building’s owner, Marland Buckner, who bought it last year for just shy of a million dollars after Tiny Victory closed. 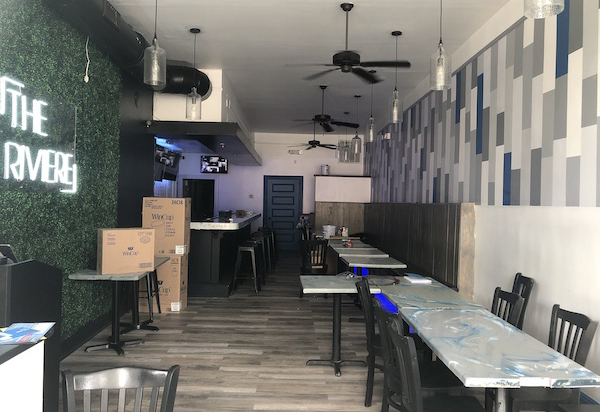 Restaurateur Javontae Jones said the building at 506 W. Broad St. needed a lot of work to get ready for The Riviere’s opening.

“Me and (Buckner) just connected. He really was patient with me and helped me out with the rent and the buildout because the building needed a lot of work,” Jones said. “It’s always good to have that landlord on your side.”

The Riviere also plans to host spoken word and other arts events that would fit in with the neighborhood’s First Fridays art walk.

“My whole thing is, I want to bring that culture back to Broad Street,” Jones said. “The world’s opening back up. I can’t wait to open up and feed the people.”

The Pulse has hurt so many businesses after taking out a huge chuck of parking on Broad Street. The belief that people will take the Pulse to a restaurant on Broad is just fantasy.

I do exactly that all the time.

This location has routinely had restaurants change and it has nothing to do with The Pulse. Less than 20% of restaurants make it more than 3 years no matter where they are located (suburbs, urban or rural). If your logic was true, then how do all of the people who pile into Edo’s Squid happen to keep that place alive? It’s simple, if a restaurant offers a great product, then people will deal with tight parking.

Pulse or no Pulse, there’s way more parking on that stretch of Broad than that stretch of Harrison. And if you’d consider parking on Franklin or Grace to go to Edo’s, it seems reasonable to assume you might do the same to go to a place on Broad. Honestly, I haven’t noticed any lack of parking on Broad and I pick up take out from Max’s, Tarrant’s, and Choong Man Chicken fairly often. I’ve also rarely had trouble finding a spot when visiting Charm School.

Thank you, Ian. I used Edo’s as an example simply because of how much the area around it has grown since 2000. I never have a hard time finding parking in Richmond and I never mind walking, which was my point. If a place creates enough buzz people will put in the effort and lack of parking isn’t it.

Yeah. No. Tiny Victory, Yaki, Antler and Fin all had lots and lots of promise, great service, great vibes, notoriety in the city, and “buzz” so you say. This point is invalid. Parking isn’t enough to pull people that far up Broad Street. The Pulse doesn’t pull much business considering not many even care to use Richmond transit. I mean Lolol. Add that with bums lurking outside to harass guests and panhandle for money outside of those casual fine dining style businesses. This is just gonna be another a brunch spot, a thing Richmond has by the boatloads, so good… Read more »

Personally, I shifted a lot of my business to Broad Street restaurants since Pulse was implemented. Being able to leave the car at home is a huge benefit and, even when I do drive down there, finding a free parking spot within a block or two is not an issue.