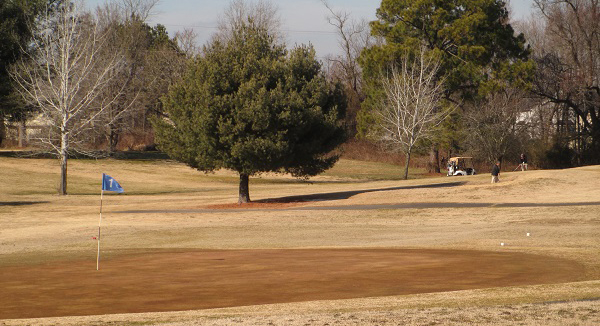 Following five deferrals in as many months, a reworked proposal to turn Glenwood Golf Course into two subdivisions with hundreds of homes has received the blessing of the Henrico County Planning Commission.

Commissioners last week voted in favor of Godsey Properties’ revised plan to fill the 120-acre golf course — the oldest public course in metro Richmond — with up to 290 houses in two sections that would be separated by a stream that bisects the property.

The number of homes was reduced from Godsey’s initial proposal for as many as 320 lots — one of several amendments made to the plan since it was first presented to the commission in February.

At that time, Henrico planners said the proposal did not fit what the county’s comprehensive plan envisioned for the site, which has been designated for a mix of residential, commercial, office and recreational uses. The property is along Creighton Road in eastern Henrico, just north of Nine Mile Road between Interstate 64 and Laburnum Avenue.

After multiple revisions and deferrals from both Godsey and the commission since then, planning staff determined the development would be consistent with residential neighborhoods surrounding the site, in terms of density, land use and overall design.

“Considering the recent proffer revisions to address a number of previously identified issues, staff generally supports this request and believes it would be a reasonable alternative to the 2026 Comprehensive Plan recommendation,” planners said in their latest report to the commission.

At least one concern remains for staff: whether proffered lighting for the development’s common areas and trails is adequate to ensure pedestrian safety. The report recommended that a more complete internal lighting plan for the central park area along the stream be provided.

The case now goes to county supervisors for a final vote. The board is scheduled to take it up at its Aug. 10 meeting. 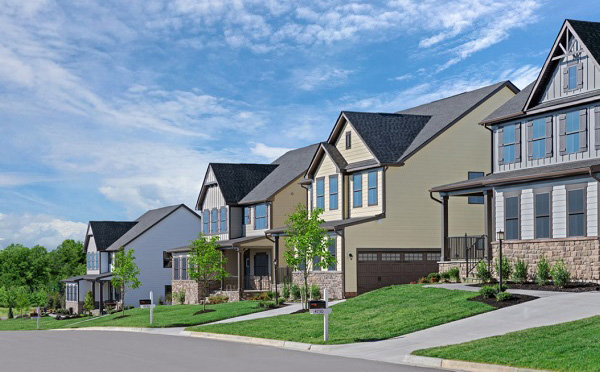 A rendering of the homes planned for the Glenwood Golf Course redevelopment. (Images courtesy of Henrico County)

Beyond the reduced lot count, amendments to the plan include additional details regarding overall density and lot size breakdowns.

The requested rezoning — from agricultural use to General Residence District — would allow for detached zero-lot-line dwellings, meaning homes typically built adjacent to a property line. But Godsey’s proposal calls for the units to be built in the middle of their lots — an altered placement that requires a provisional-use permit on top of the rezoning.

According to the latest proffers for the case, the 290 homes would be split between 97 lots on the northwest side of the stream and 193 on the southwest side. Each section would have two access points off Creighton Road, while a new westward connection would provide an additional access from Carneal Street.

All of the homes would have at least a one-car garage, with 35 percent of those rear-loading. Homes would be designed according to eight architectural styles and range in price from $310,000 to $410,000.

Renderings show one- and two-level homes with front porches and facades with varying colors and building materials. Garage doors would be enhanced with additional design elements, according to the proffers included in the case.

Other requirements include preserving existing trees of a certain size. Pedestrian trails would connect the two neighborhoods, and the central park area would include a playground, two pavilions and existing ponds.

Godsey is working with engineering firm The Bay Cos., which drew up site plans included with the case. Local attorney Andy Condlin with Roth Jackson Gibbons Condlin is representing Godsey in its applications. 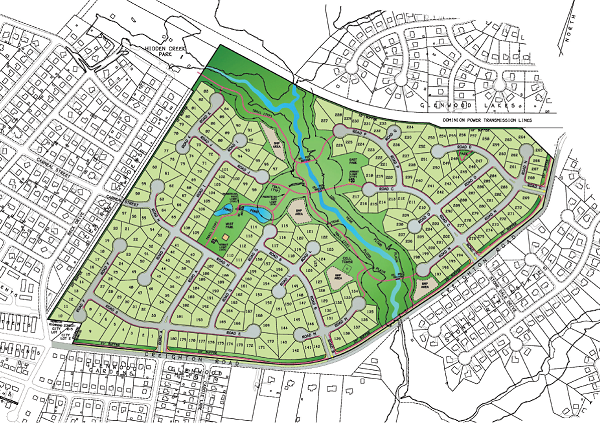 A revised site plan shows how the 290 homes would be separated by the creek area that bisects the property.

Creighton Road to be widened

Godsey is under contract to purchase the nearly century-old golf course, which has been in operation since the 1920s. The 18-hole, par 71 course was designed by Scotland-born golf architect Fred Findlay, whose credits also include the Meadowbrook Country Club course in Chesterfield. Glenwood remains open for play.

Owned by Harry Griffin and Frank Adams, the course most recently changed ownership in 1996 in a nearly $4.5 million transaction, county property records show. The county most recently assessed the property at $1.32 million.

Earlier this year, Doug Godsey, who runs Godsey Properties as well as homebuilding arm NK Homes and excavation contracting firm Godsey & Son, said he was optimistic that his plan for Glenwood would ultimately move forward.

“We’re doing something out there that no one else has done,” Godsey said. “The amenity areas that we’re providing, the trails – it’s going to be a subdivision like the East End hasn’t seen.”

Godsey said the project would involve a $2 million investment to widen Creighton Road by 10 feet along the length of the property, with additional turn lanes and curb-and-gutter improvements. He said sidewalks also would be installed along the road.

Godsey said a cost estimate for the overall project had not been finalized because it depended on the number of lots allowed. Godsey was unable to be reached for comment last week.

“We’re trying to get as many lots as we can, because of the type of amenities that we’re including in this,” Godsey said in February. “There’s a huge need for housing in the East End. It’s been neglected for years.”

He said NK Homes likely would build some of the homes, but that other builders would be brought on for the bulk of the development.

“This project is too big for NK Homes,” he said. “We may do a section of it, but we’ll bring in some other builders. I’ve had numerous builders inquire.” 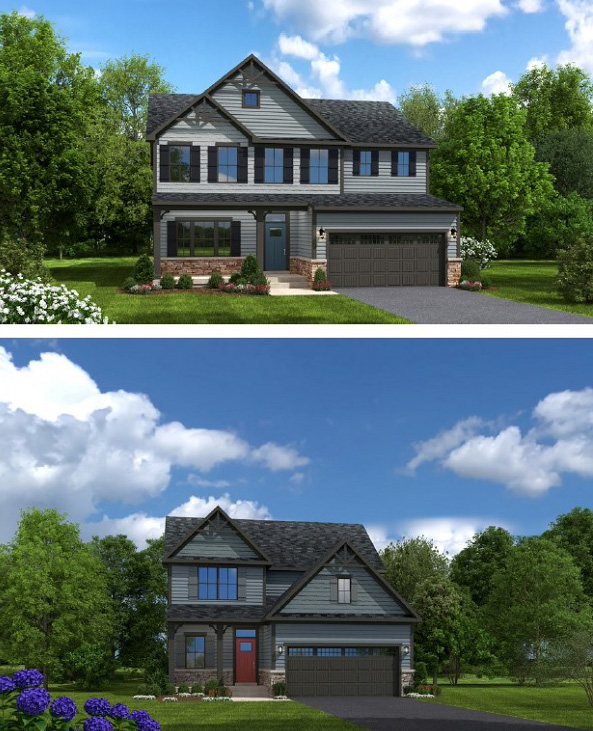 Homes would vary between one- and two-level floorplans.

Active in residential development for years, Godsey has several projects underway in and around eastern Henrico. His developments include Timberlake Commons, a 73-home subdivision in Mechanicsville that he took over from another builder several years ago.

Godsey also is starting work on Drybridge Commons, a nearly 400-home development planned on about 100 acres north of Williamsburg Road at Dry Bridge Road. The company bought that land in 2018 from developer Salvatore Cangiano and secured zoning for the project last year.

Where past proposals for Glenwood from other developers sought more homes on the site, Godsey said he’s not looking to max-out the golf course with as many units as possible.

“The (previous proposals) have tried to get too much out of it, up to 600 townhome units,” he said. “It was developers trying to come in and get rich off of one subdivision. That’s not what I’m here to do.”

“I’m committed to the East End, to all these different developments down here, and I don’t have to make it off of one,” said Godsey, who in recent years built a new $4 million facility for his businesses on Charles City Road. “I’m going to be here in the East End and I’m going to keep developing here.”

A Highland Springs High School graduate, Godsey said he has an affinity for Glenwood Golf Course, noting his grandfather, Wilson Godsey, played there regularly in the 1970s.

“My grandfather had seven hole-in-ones out there at Glenwood. He eagled every single hole out there,” he said. “I would love to see it stay a golf course, but it’s just not feasible. Golf courses are working on such slim margins now. Glenwood just doesn’t get the play it used to get.”

Good. We need more housing and a golf course is one of the less useful utilizations of prime real estate in this market. Already we have a glut of golf courses and some are closing on their own. At least something useful will come out of that

Redeveloping the golf course into housing is a great thing. I wish the site plan had fewer cul-de-sacs and instead continued the loose grid pattern from the south and east. This site could have been envisioned as walkable community, perhaps with a few retail or commercial building along the main roads or at intersection. It’s a pity it is fully single-use suburban and car oriented.

Just when you think Henrico might be getting in touch with current reality, they approve a suburban development just like they’ve been doing for decades. Homes instead of a golf course is great, but this is just doubling down on a type of development that is really unsustainable. At least a mix of home types with some townhomes or duplexes, not to mention some affordable housing and something approaching a street grid would be much more forward-thinking.

To say that golf courses are running on slim margins, is misleading. Very interesting because golf has had a biggest boom in history, since early Tiger Woods days. Greens fees are well above $60+ mark.

The margins are slim, because of that location of the golf course. It’s situated alongside Fairfield Court.

Unfortunately, like Highland Springs GC, location and condition, ultimately did the course in, not the margins of the golf industry 2021.