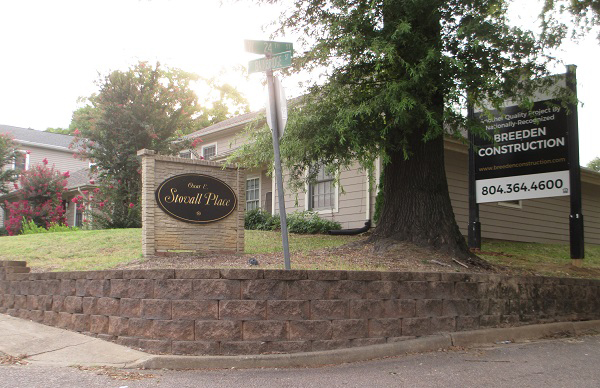 The Stovall Place apartments in Swansboro, one of five properties where renovations are underway. (Jonathan Spiers photos)

Part of an effort to convert public housing units in Richmond to private ownership is beginning to be realized with the start of five apartment property rehabs scattered across the city.

Work started in May and June on renovations to five of 11 subsidized housing properties that the Richmond Redevelopment & Housing Authority is transferring to The Michaels Organization, a New Jersey-based firm that was awarded a contract in 2019 to rehab and take over ownership of the buildings.

Curtis Adams, a vice president with Michaels Development in Washington, D.C., said the company closed in May and June on 99-year land leases for the five properties, paying $13.1 million for Fulton, Afton and Bainbridge, and $9.7 million for Stovall and Randolph. Michaels will own and manage the buildings under those leases, while the RRHA will retain ownership of the land, Adams said.

“It’s great to finally get underway and to provide the quality housing that the residents deserve,” he said.

The remaining six properties, which provide housing specifically for seniors, are to begin rehabs next year once financing is lined up through Virginia Housing, formerly the Virginia Housing & Development Authority (VHDA).

“We’re going through the due diligence process with VHDA, so a closing date and construction commencement date have not been set yet,” Adams said. “It’s looking more like the early part of next year.”

Totaling 553 apartments across town, the renovations are part of an effort by the RRHA to transition those units from public housing to private landlords, which then would use a project-based voucher program to rent units to Section 8 residents.

Michaels, which has a track record primarily in student housing, was selected over nine other firms that responded to a request for proposals. 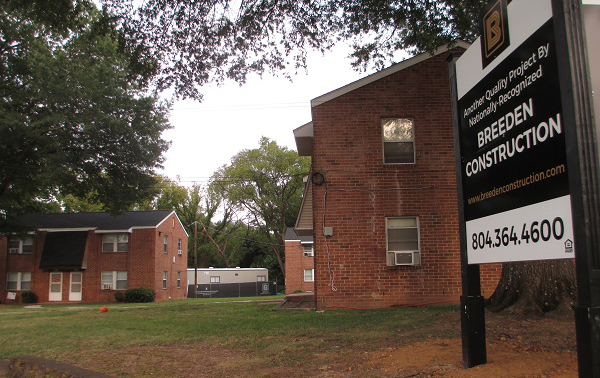 Signs indicate work is underway on renovations at the Bainbridge Apartments in Swansboro.

The five rehabs underway, involving 204 apartments, are projected to cost $59 million combined, acquisition costs included. The units will be modernized and buildings upgraded with central air conditioning, dishwashers and washer and dryer units.

As the units are rehabbed, they will be converted from public housing to a voucher program, in which rental income is transferred to a voucher for those receiving Section 8 benefits that stays with a particular property.

Any residents relocated to accommodate the rehabs will be allowed to return to their units once construction is completed, the RRHA has said.

Financing for the five rehabs underway involved a mix of $18.1 million in private equity raised through the sale of federal 4 percent low-income housing tax credits, and $28.2 million in construction period tax exempt bonds, according to a release. Red Stone Equity Partners invested in the tax credits.

Breeden Construction, a subsidiary of Virginia Beach-based The Breeden Co., was approached by Michaels for the first five rehabs because of other work it has done with the RRHA, Breeden President Brian Revere said last week. He said conversations started in April 2019, around the time that Michaels was awarded its contract.

Revere said the five rehabs will follow a 16-month project schedule, with renovations wrapping up in the third quarter of 2022.

All of the apartments in this round were built between 1971 and 1984 and have not received significant renovations since, Michaels said in a release. Revere lauded the effort to transition the properties and said his company is looking to pick up more of the work to come.

“We really think this is a great initiative by RRHA, much needed, and these five properties are really the starting point,” Revere said. “We’re hoping to continue to be a part of the redevelopment of some of these RRHA properties. It’s a great thing for Richmond and the neighborhoods, and we’re proud to help transform neighborhoods like this and really bring them back to what they used to be.”

The conversions are being done through the U.S. Department of Housing and Urban Development’s Rental Assistance Demonstration program. The RRHA is using the same program, called RAD for short, for its three-project effort to provide replacement housing for residents of its Frederick A. Fay Towers, near Gilpin Court.

Those projects include The Rosa apartments, part of a $30 million mixed-income, mixed-use development in Jackson Ward that was formerly known as Jackson Place. All residents of The Rosa’s 72 units were relocated from the aging Fay Towers, the fate of which has yet to be determined.

Note: This story has been updated to clarify that the $59 million development cost for the five rehabs includes the acquisition costs.

They’ll be compensated handsomly through government funds, and tax credits.