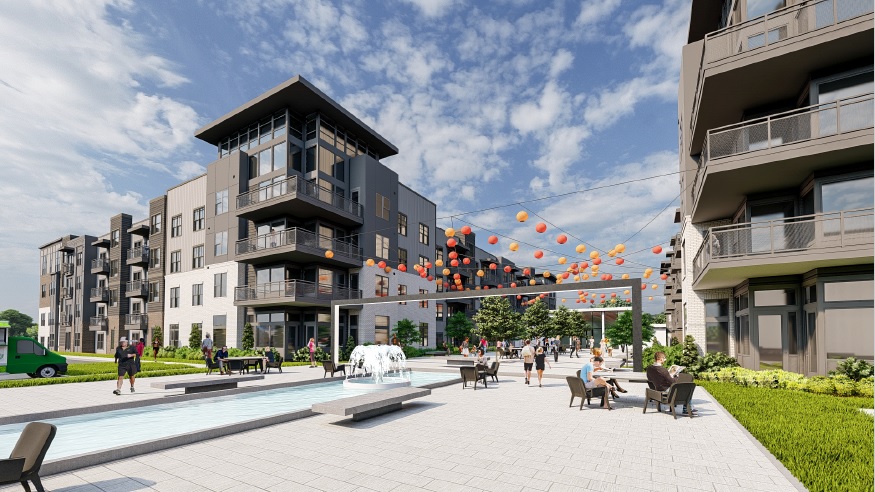 A rendering of the apartment buildings, which would replace the former Sears building and connect to Southpark Mall via a walkway between them. (Images courtesy of Shane Burnette)

With a plan to replace a vacant department store with hundreds of new apartments, Southpark Mall in Colonial Heights is the latest regional shopping hub to get in on the mixed-use transformation trend.

The city’s Planning Commission this week endorsed a proposal that would put two buildings totaling 280 apartments in place of the former Sears building at the mall’s south end.

The existing, 107,000-square-foot structure would be demolished to make way for the market-rate apartments, which would be housed in two new-construction buildings detached from the mall complex. The four-story buildings would total 370,000 square feet, according to a city review of the proposal. 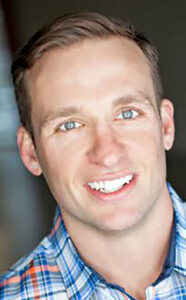 A development group with ties to homebuilder Schell Brothers is behind the project, led by former Richmond division president Shane Burnette and current Schell managing partner Nick Wexler. The duo is also developing The Station at Chester Village, a 201-unit apartment complex that’s under construction in Chesterfield County.

Burnette, who grew up in southern Chesterfield and helped bring Schell into the Richmond market before parting ways with the company last year, said the Sears site was brought to his and Wexler’s attention as they were researching the multifamily market between Chester and Petersburg.

“Anecdotally, we would hear from people in the Chesterfield area that they were coming from Colonial Heights, the Fort Lee area. So, I had this suspicion that there was a big demand that wasn’t being met,” Burnette said. “We were originally looking at a different site, and the city pushed us towards that Sears site.”

Karen Epps, Colonial Heights’ economic development director, said the city has been trying for years to fill the Sears building, which she said was challenging due to its size and low ceiling. She said the plan for the apartments is a welcome proposal for the mall, which dates back to the late 1980s.

“The fact that malls are pretty much becoming a thing of the past, with big box retailers scaling down and smaller spaces being used for retail, things aren’t like they used to be when we went shopping. So, we need to get with the times,” Epps said. “I think this is a great way to help with revitalizing and keeping Southpark Mall strong.”

The mall’s owner, Tennessee-based CBL Properties, is lined up to be an equity investor in the project, which Burnette estimated at about $70 million. He said CBL, which manages mall properties across the country, has emerged from bankruptcy after filing for Chapter 11 protection in late 2020.

Regarding the equity investment, Burnette said of CBL, “I think that speaks volumes to how they feel about the project and the idea of 280 rooftops helping to turn Southpark around. It’s not that Southpark is in terrible shape, but it’s definitely at an inflection point where it needs some things to remain a viable destination.”

A call to a CBL executive involved in the project was not returned by deadline Wednesday afternoon. 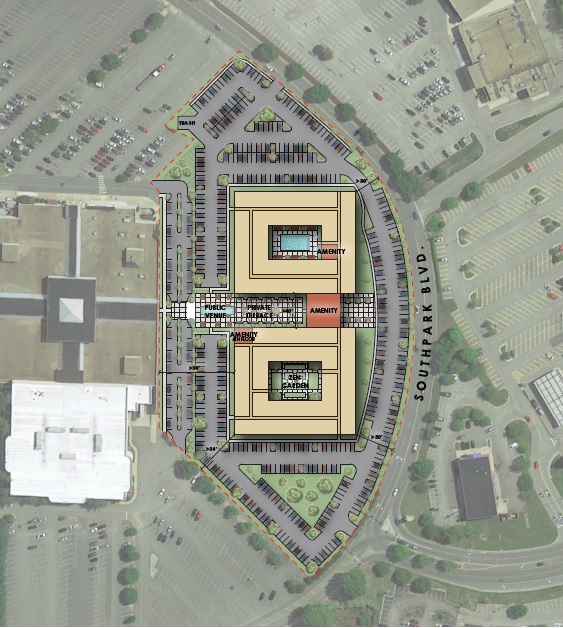 A site plan shows the two apartment buildings near the mall’s south end.

Plans call for the two apartment buildings to be detached from the mall proper, with a walkway amenity between them providing a connection to the mall’s stores and restaurants.

Where other mall transformations are working residential units into the larger structure, such as the apartments that are replacing the former Sears space at Regency mall in Henrico County, Burnette said they preferred detached buildings at Southpark.

“We thought the separation would be better, so you’re obviously at the mall and you get all the access, but you also still have a sense of place that’s detached from the mall,” Burnette said. “I think it’ll allow us to have some access control and safety features that we want.”

Each building would wrap around a central courtyard with amenities including a pool, garden and gathering areas. Other planned amenities include a clubhouse, gym, business center and coffee bar, and the complex would include 454 parking spaces.

The apartments would consist of 69 one-bedroom units, 168 two-bedrooms and 43 three-bedrooms, with sizes ranging from about 720 to 1,500 square feet. Renderings of the buildings show most units would have balconies. Burnette said monthly rents would be in line with comparable apartments in the market.

Noting new jobs expected from the pharmaceutical hub that’s taking shape in the Tri-Cities area, Burnette said, “I think this is going to give those folks some Class A living options that weren’t available prior to this.” 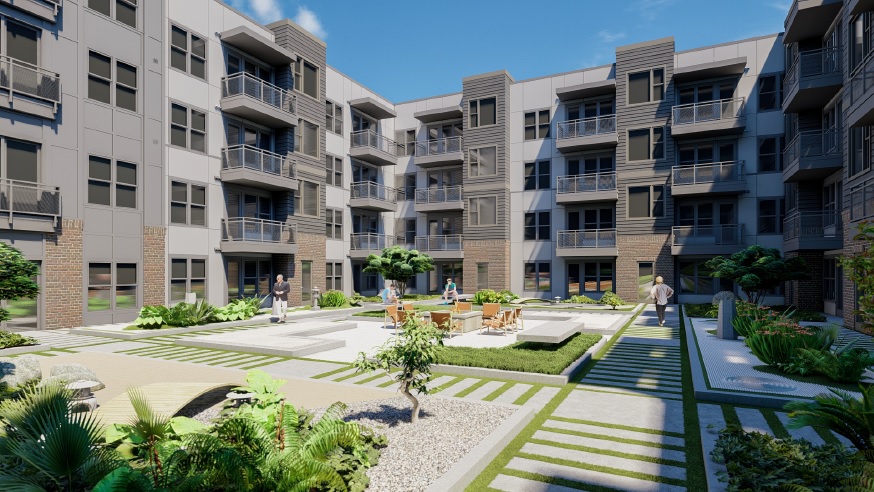 A zen garden would fill the courtyard of one of the buildings.

The apartments are being designed by Poole & Poole Architecture, which also designed The Station at Chester Village. Burnette said an engineer and contractor have not been selected for the Southpark project.

An entity tied to Schell Brothers is under contract to purchase the 8.6-acre Sears property from CBL for $3 million, according to a purchase agreement included with the documents. The entity, SB Apartments LLC, lists Schell Brothers’ Delaware headquarters as its principal office and is registered to company president Chris Schell.

City records put the property’s appraised value, including land and improvements, at $7.6 million.

The purchase is contingent on approvals of a special exception permit and special-use permit that are needed for the project to go forward. The City Council is scheduled to consider those approvals at its meeting Feb. 8.

At Tuesday’s Planning Commission meeting, planning staff supported the project, which was described as consistent with goals included in the city’s comprehensive plan. That plan encourages improving the mall area as a mixed-use center, with residential components allowing for live-work-play.

Epps, the economic development director, said such additions to the mall are essential to its future. 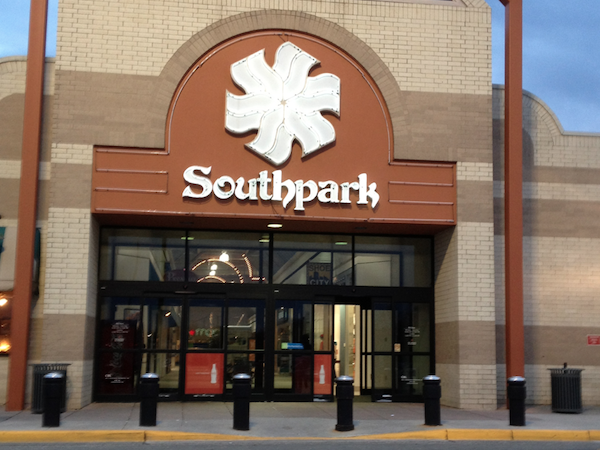 CBL Properties is the owner of the Southpark Mall.

“Southpark Mall is a major part of Colonial Heights, and it’s the only major retail center south of Richmond to Roanoke Rapids,” she said. “We want to do everything that we possibly can to keep the mall strong and vital for the community and those traveling on 95.”

Burnette said the apartments project fits the city’s vision for the area to a tee. If approved, he said construction would start immediately with an 18- to 24-month buildout.

“The big thing for us was making sure that there was an appetite for it from the city and it was along the lines of what they wanted to do,” he said. “The recommendations the comprehensive plan has for keeping Southpark Mall vibrant and for housing options in the community, it describes our project pretty perfectly.”

Clarification: The purchaser in the agreement with Southpark Mall’s owner is an entity tied to Schell Brothers, not the company itself as initially reported. This story has been revised to clarify that the purchasing group is the entity, SB Apartments LLC.

Very nice. We’re seeing more and more of this style redevelopment nationwide as mall owners look to capture segments of the residential market close to their stores. Congrats to Shane for being there.

One thing that puzzles me is why they don’t have a C-store or small grocery store included with things like this, more often. Also, I wonder about the separation from the mall, it seems like it will turn this into a “desert island” only reachable by car.
Will there be a pedestrian friendly way to get to the mall?
Will there be a way to get to the petersburg bus lines?

Wow. Okay, let me explain to you. I assume you are not familiar with this area. A grocery would be silly with this site. There are cheap grocers (Sam’s, Target, Walmart) walking distance (not that one would want to walk) from there — a grocery would last about 20 minutes trying to compete — they are bad businesses without economies of scale. “Pedestiran Friendly” — not sure Urbanists remember what mall footprints are like, but they are VERY pedestrian friendly — including the parking lots. Third, the entire southpark area is rather a “desert island” and that is not only… Read more »

I mean, God, Ed — as far as pedestrian friendly access to the mall …. look at the drawing.

An infant could crawl to the mall more safely than it could in most of urban Richmond.

Adaptive reuse of mall based properties will be ongoing. This is a good first step for Southpark Mall, but probably not the last.

So it finally begins. I have long been fascinated by this sort of thing, every kind of adaptive reuse of Mall real estate, actually. Here in VA, the most interesting stuff is going on, on one of the spectrum at least, at Macerich’s Tyson’s Corner, but at more abandoned areas, lots of little immigrant businesses spring up and form their own ecosystem in them. And then there is everything in between. What is lost in the debate over the Future of Malls, other than that not all malls are in any way doomed, esp those at the high end, is… Read more »

awesome!!! so glad to see this coming to col hgts !!! and.. the apartments will be at market value!!!!! glad of that too!! I use to live in colonial heights but moved out when it started going down hill…….now I may consider moving back ……

That Mall has tons more operently locked up in all those empty parking lots around it.