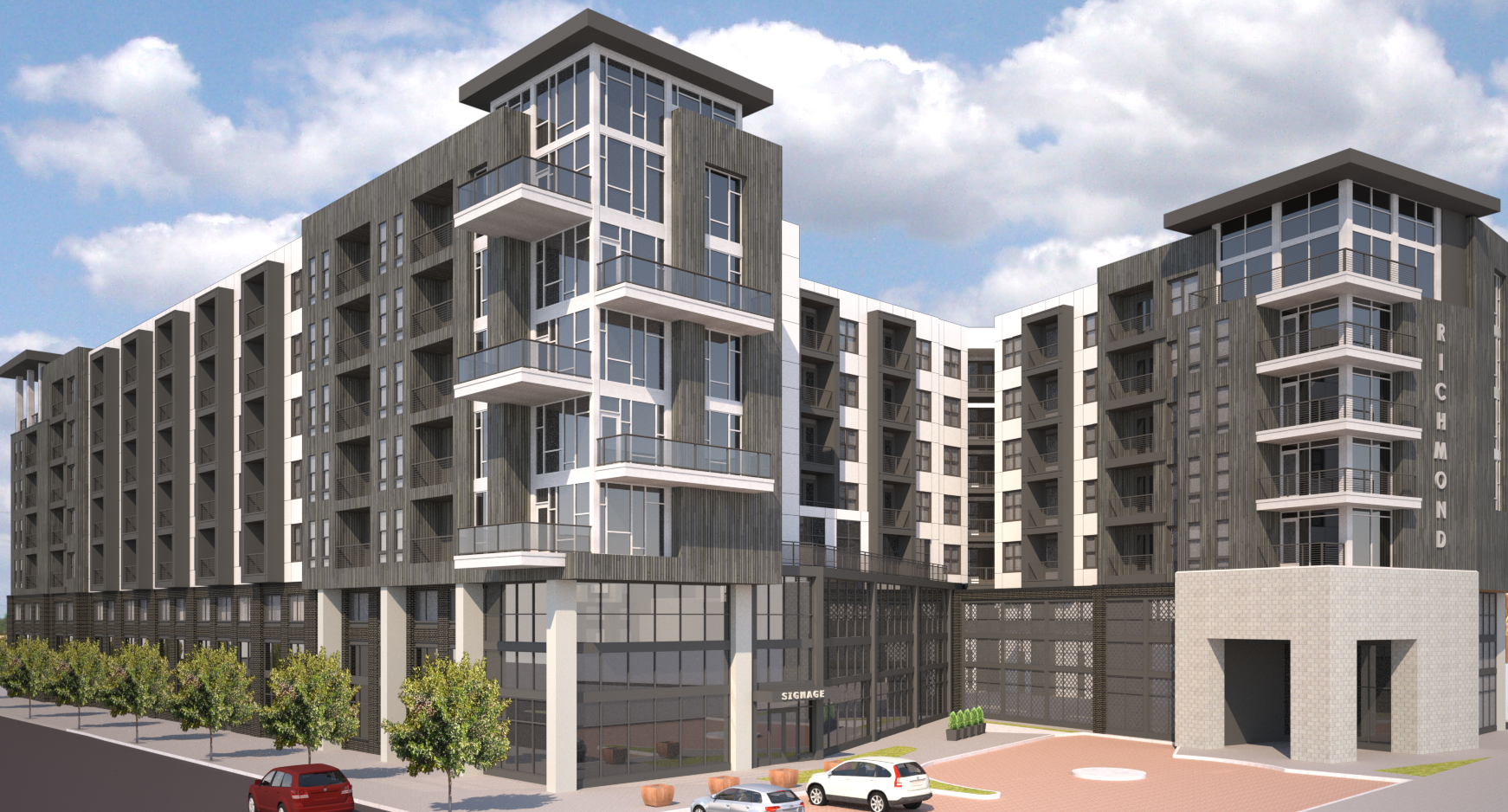 A clearer picture is coming into view of a massive mixed-use development in the works for North Arthur Ashe Boulevard.

The rendering, by local firm Poole & Poole Architecture, shows the eight-story building’s façade as it would appear along the boulevard. Previous renderings that depicted the massing for the project appeared to show a seven-story structure.

The new image shows six levels of apartments above a two-story base that would include 14,000 square feet of street-facing commercial space and structured parking totaling 296 spaces. 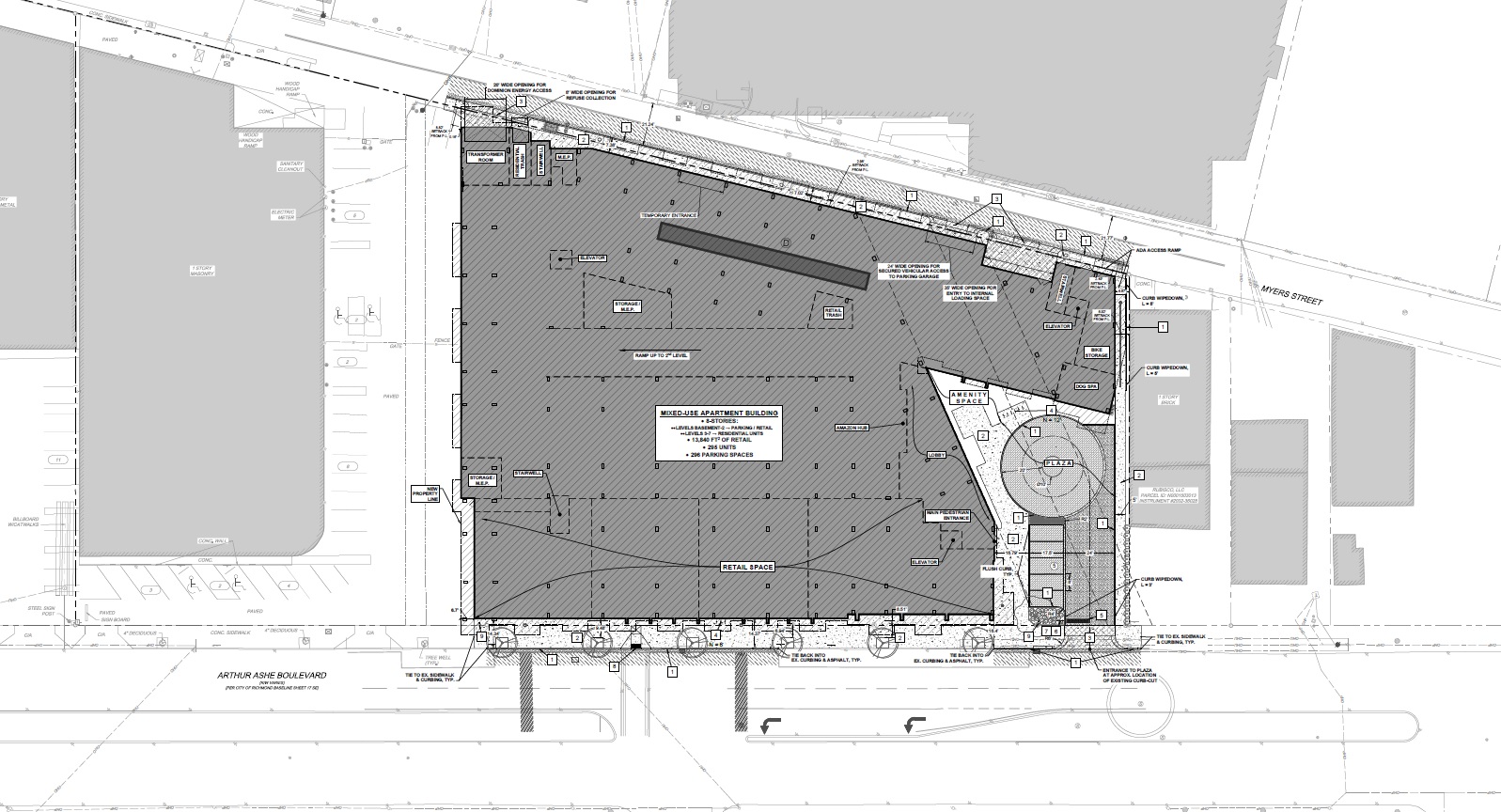 A site plan shows the building with a plaza and amenity space fronting the boulevard. (City document)

The permit request, which was slated to go before the Richmond Planning Commission on July 18, seeks exemptions to location requirements for the structured parking, to allow spaces fronting the boulevard in the second-story deck, as well as a drop-off and pick-up area for ridesharing, taxis and vehicles making deliveries. Zoning requirements currently prohibit parking or vehicle circulation along principal street frontages.

David Franco of Level 2 Development, which is developing Leigh Addition along with fellow D.C.-based firm SJG Properties, said they were recently made aware of the special-use requirement but that the plans for the project have not changed substantially since they were first reported last July.

“We just want to be able to have some parking for Uber drivers, Lyft drivers, taxis, food deliveries, to be able to pull into the driveway while they’re making deliveries, as opposed to staying on the street and double-parking and blocking traffic,” he said.

The permit application from engineering firm Timmons Group states the special use “is necessary due to site constraints, including narrowness of the site,” a 50-foot-wide sewer easement that bisects the site, and “because the owner desires to provide off-street parking at a ratio of approximately one space per dwelling unit.” Timmons’ Amelia Wehunt prepared the application and is representing the developers. 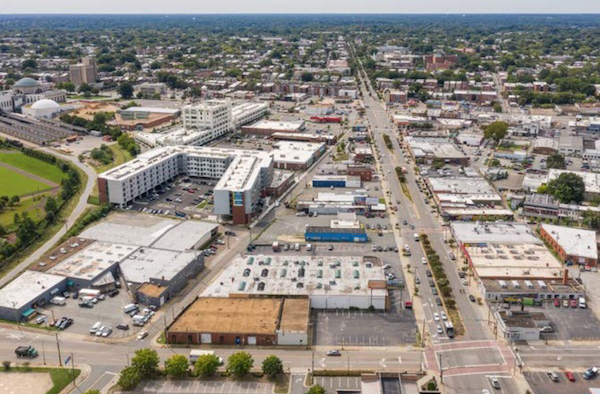 The 3.3-acre assemblage is on the east side of Arthur Ashe Boulevard. (BizSense file photo)

The development would replace existing buildings including the former Buz and Ned’s Real Barbecue restaurant, which closed earlier this year to make way for the project. The site is part of a 3.3-acre assemblage that Level 2 and SJG purchased last year for $12.5 million.

The rest of the site includes the Cort Furniture building, Tilt Creative production studio and the former Sportscar Workshops building, which are not involved in the Leigh Addition project.

Meanwhile, just south of the site, plans remain in the works for D.C.-based Outlier Realty Capital’s six-story cohousing project at 1101 N. Arthur Ashe Blvd. A revised building permit request for the six-story building was submitted to the city in January and remains under review.

Proper site layout and planning are critical when one is creating and defining neighborhoods. There appear to be three options where one might choose to locate a proper entry to the site and building of this density. Those being the corner of W. Leigh Street at Arthur Ashe and W. Leigh Street at N. Myers Street. Another less obvious is at the eastern end of W. Leigh Street extended on axis from Scott’s Addition to the west. Any of those three options would be far superior to the chosen location which speaks to parking lots and property boundaries – which… Read more »

Actually W. Leigh Street is not an option since this portion of the development will not extend that far. They are leaving the two northern properties as is for now. Also, not sure we are reading the same article because they talk of off street parking but not surface parking lots. The off street parking would all be in structured parking except for the parking for delivery drivers and ubers/taxis. The parking facing the street they are talking about is on the second floor of the deck. So, it would face the street, but not at street level. I don’t… Read more »

Thank you for pointing out the discrepancy David. I see that the site plan only continues to mid block though the article’s aerial shows it extending further north to fill the block. That leaves the axial end of W. Leigh Street heading east from Scott’s Addition as the most logical entry point. I am all for short term parking for delivery/pickup, however urban buildings create pedestrian spaces and are not dictated by automobiles. Imagine a proper people space that encourages foot travel and links the building to its surrounding environment. Richmond is fortunate to have many talented planners and architects.… Read more »

This is rather impressive for a elevation submittal for an SUP. It’ll make good use of its prominent site on Arthur Ashe Blvd. The Outlier building will be one to watch. It appears to be planned in the student housing concept of communal living spaces surrounded by private bedroom/bath suites with a very low parking ratio per bedroom. The premise is it’s residents will not bring in autos. The City needs housing in a big way, so if their guess is correct, the Outlier concept will be another tool to provide affordability.

Yeah I’ll admit, they could have definitely done something alot more stylish. A brick Tudorish style would have been neat to try out.

Out of the mouths of babes….I drove by this area with my son today and pointed out the new Diamond District site, told him where the new housing would be built, etc. I just pulled up this article and said, “Son, look, this is what the new construction may look like”. His reply? “It looks like prison!!” He’s 15 and save the balconies, he’s correct.

Agreed, another uninspired design. We are turning the city into the suburbs with all of these look alike big box apartments. Why move here if it all looks the same?

Did anyone else notice the last sentence….the adjacent new building’s permit being revised, not a new permit, a revision, was submitted in January. It is July and it is still under review. Holy COW!

Yep WAY too much red tape. This is why stuff hardly never gets built down here in Colonial Heights either.