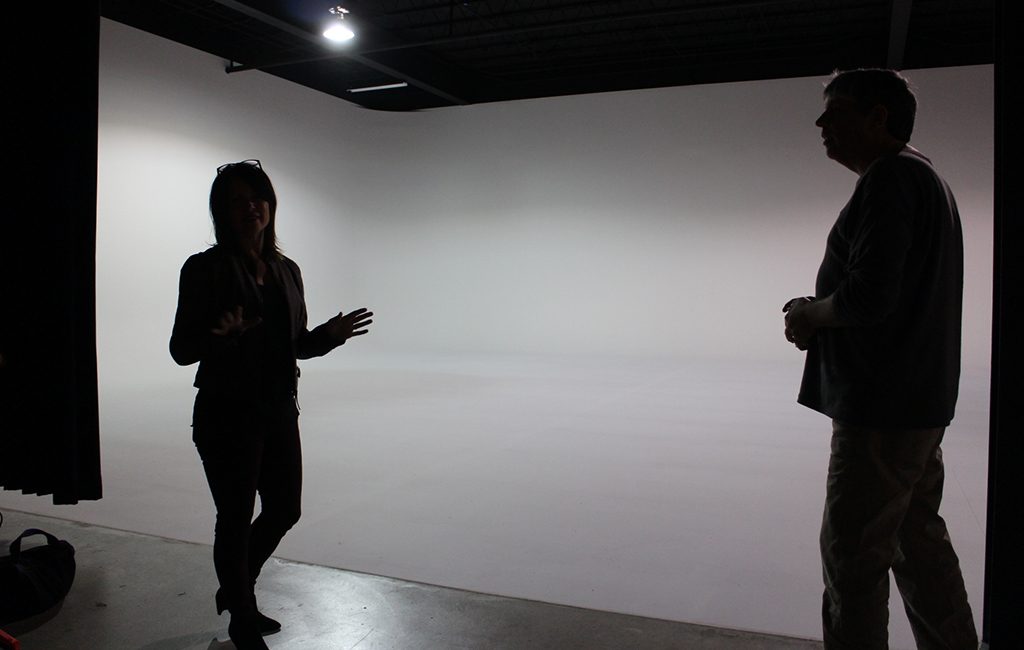 A year after leaving Shockoe Bottom for the Boulevard, a local production studio is rolling in its new space near The Diamond.

Park Group has finished remodeling its studio behind the Cort Furniture retail building at 1207-B N. Boulevard, where it moved and expanded its Shockoe Bottom facility to make way for an apartment project there.

The studio moved into the 15,000-square-foot space a year ago and immediately started filming spots for clients such as Geico and Walmart, said Stacy Murphy, president and executive producer of Park Group and sister company Juicy Films. Construction and remodeling continued during that time but has finished inside, added founder and CEO Dave Trownsell.

“One thing left for us to do is to finish the outside, add some curb appeal,” said Trownsell, who hinted at signage and other ideas in the works that he said would help the studio stand out among its neighbors in the burgeoning Boulevard corridor.

“I want this to be a fixture here in Scott’s Addition,” he said of the building. “It’s such an up-and-coming area, and there’s so many restaurants and resources for our clients when they’re here. We couldn’t have asked for anything better.” 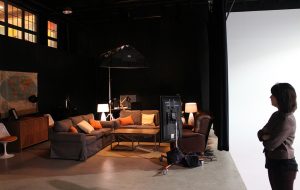 The studio’s “video village” space where clients can view shoots, complete with a kegerator. (Jonathan Spiers)

Park Group’s move to the Boulevard tripled its studio space, providing more room for storage of props and set pieces and for more sets to be staged and shot simultaneously. The former warehouse for a car dealership, and more recently a limousine service, has been converted to multiple spaces, including a general production area, prep kitchen for food shots, an upper-level lounge where clients can view their shoots from above, and a 40-by-60-foot shooting space that Murphy said was finished just in time for an Audi shoot in September.

Park Group staff designed the space, which was upfitted by general contractors including locally based Matthew Logan Contracting. Trownsell estimated the work at about $500,000.

“When we came in, it was literally nothing,” Trownsell said. “It is funny, because when we moved in here, we had totally different plans for the space. Once we moved in, we saw more efficient ways to use the space.”

Trownsell said most of the cost went into electrical to support the amount of power needed for lighting and equipment, floor refinishing and A/C installation.

“It was big – one of the bigger projects I’ve ever encountered,” he said. “You can plan all you want, but until you get in here using the space, you realize you need to make adjustments.”

The studio is staffed by five employees who remain on site, moved over from Park Group’s corporate office in Shockoe Slip, where it freed up space that now houses fellow studio Hue & Cry. Murphy floats between both locations and said multiple freelancers are in the studio at any given time. 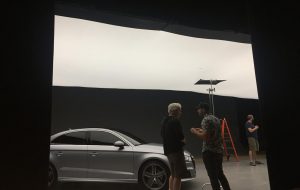 Film crews during a shoot in the space. (Courtesy Park Group)

Some of the space is rented out to two subtenants: photographer Todd Wright, who maintains a studio there, and Tinsley Film & Video, which Park Group often partners with on projects, Murphy said.

“We rent the gear; he rents the space,” Murphy said.

Park Group leases the building from Ed Lacy, who is behind the entity that also owns the nearby Car Pool property, which it purchased last year. Trownsell said he signed a 20-year lease for the studio space, with options to continue through that 20-year term.

Since securing the space, Park Group has continued work for Walmart and Geico while also picking up work for Capital One, Virginia Tourism and Audi, which Trownsell said has turned into a long-term contract. The studio, which splits its work between studio shoots and on-location filming, has filmed several promo videos for the car brand – including one last year shot throughout downtown Richmond – and Murphy said they have two more in the works for early next year.

Trownsell said that client in particular played a factor in deciding on the Boulevard space, which he and Murphy said they considered early on in their yearlong search but initially passed over.

“We have a contractual relationship with (Audi) now that took some time to develop,” he said. “Knowing we were in the works with Audi on a contractual basis, it was essential that we find a space that could accommodate that.”

With triple the amount of space to work with comes increases in costs to operate and maintain it. Murphy said rent is also higher than what they were paying for their previous Shockoe Bottom space – “but it’s totally worth it,” she said.

“Now that we have all this room, we can build anything – living rooms, bathrooms, kitchens – and they can all be standing at the same time.”

“It’s safe as well – a safe area,” Trownsell added, noting the building came with fenced-in parking that accommodates clients and the studio’s production trucks. The building also features bays for loading and unloading equipment for shoots.