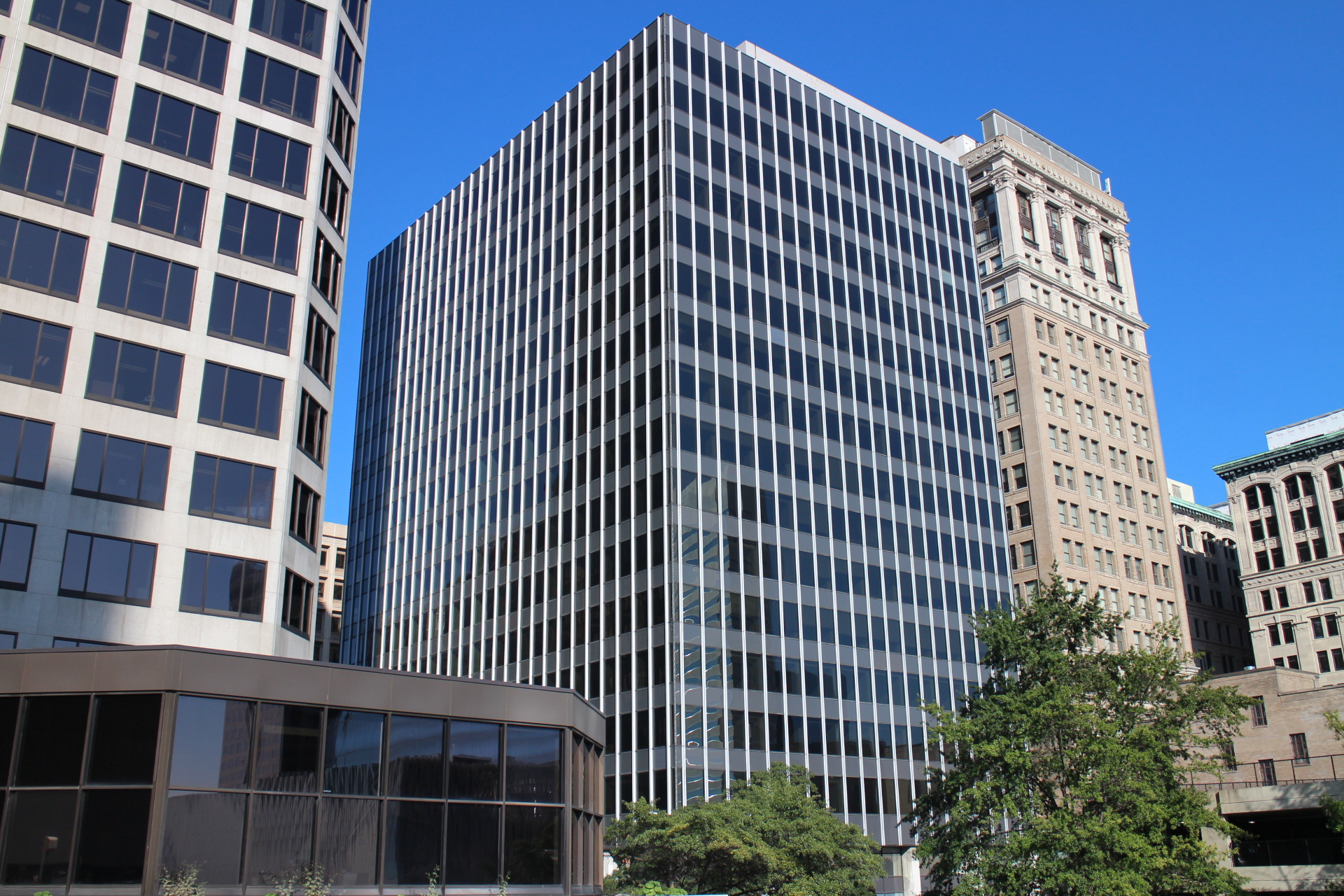 The 17-story Wytestone Plaza office building was built in the mid-1960s and is now eligible for historic tax credits. (Mike Platania photo)

Downtown is slated to get another 300-plus residents as another Central Business District office tower is eyed for a new use.

The Vakos Cos. is planning to convert the Wytestone Plaza building at 801 E. Main St. into apartments.

Vakos bought the 17-story building in 1997 for $3.5 million and has operated it as an office building ever since, with the Virginia Department of Social Services as its primary tenant. It also had a bank branch on the ground floor for many years.

Once known as the Ross Building, Wytestone Plaza was built in the 1960s. That age makes it eligible for historic tax credits and helped spur the decision to change its use, said Lee Shadbolt, president of Commonwealth Architects, which is designing the conversion.

The roughly 280,000-square-foot building includes three levels of below-grade parking and a ground-floor commercial space that had once housed a Wells Fargo branch but is now vacant. The commercial space will remain as part of the conversion and the floor above it will house amenities for tenants including a lounge, office and gym.

The remaining 15 stories will be a mix of studio, one-, two- and three-bedroom apartments, which Shadbolt said average out to around 1,000 square feet.

Commonwealth Architects has worked on other historic apartment conversion projects, including the Central National Bank and First National Bank buildings nearby.

Shadbolt said Vakos is looking to have the apartments ready sometime next year and that the conversion should be straightforward.

“We’re not changing stairs and elevators, we’re not modifying the exterior envelope and the circulation core, and a lot of the infrastructure remains intact,” Shadbolt said.

Vakos is seeking a special-use permit for the project because requirements regarding operable windows for dwelling units aren’t met by the building.

Plans show that engineering firms Daniels & Associates and Dunlap & Partners are also working on the project.

Wytestone Plaza is the second office tower to be eyed for apartment use this year. In the spring, Genesis Properties went under contract to buy a pair of Dominion Energy-owned properties, including the Eighth & Main office building, which it’s planning to turn into 300 apartments. Genesis is also planning to buy a nearby parking deck and build another 300 apartments on top of that.

Between Genesis and Vakos’ projects, 900 new apartments are now in the pipeline for the CBD. Shadbolt said he thinks there will be more to come, particularly historic tax credit-fueled conversions.

“I think we’ll absolutely see more. Every year we see the same thing, people keep coming back to the city,” he said. “In 2000 it flipped. People (had been) leaving the city. Now the amount of people that live in city limits has increased. That’s why we’re seeing more adaptive reuse projects, and they keep getting closer to the city core.”

The supply side of the equation continues to ramp upward as new apartment structures are announced weekly. As of yet it hasn’t met demand which rockets further skyward. Isn’t it time that the City Council promote an affordability element in the real estate tax code that allows a rebate of taxes to apartment owners who can prove that they are leasing units to those at certain lower to mid-income levels so that those who work in the service industries, especially public service, can afford to live near where they work, thereby lowering the needs of other public service costs to… Read more »

I am curious when we hear about demand not being met yet. Is the demand high for high end apartments or more affordable ones? Flooding the market with apartments for higher incomes may not be doing anything to help demand in our area. I feel like developers continue to ignore the lower/middle income people in need of apartments.

More apartments of any kind adds to the supply side, which ultimately will push the avg. rents from increasing more and more. The idea that we specifically need low income apartments is correct and it’s also true adding a large number of apartments regardless of how nice they are helps.

Costar reports that Class A vacancies are under 4%, Class B around 6-8%, and Class C more than 10%. The competition with new housing therefore is for the higher end rents and quality amenities and appointments. Basic construction costs are roughly the same with land (location) cost one of the variables. There’s no incentive for a developer to provide units for lower income needs because the city assesses and taxes the units per its location relative to other similar developments. They don’t look at the apartment owners rental income. The city could incentivize the apartment owner’s willingness to provide units… Read more »

This is what I am talking about. Don’t get me wrong: this sounds like a good idea and I love adaptive reuse generally — but the problem with a bldg suddenly turning Historic at a certain date and hence suddenly Valuable is silly as a non-discretionary thing and is applied equally to ugly bldgs that everyone knows are ugly and not contributing to anything no matter what the eggheads say. van der Rohe and later Phillip Johnson and others created a new design aesthetic that was controversial at the time but really emphasized both high quality details AND functionality —… Read more »

I mean, at least give this bldg a “hat” or something….

DHR is inflexible on exterior changes. I’ve often thought that even ugly warehouse buildings could make nice looking apartments if DHR had a way of allowing windows to be cut and balconies to be erected and still allow the tax credits for the construction costs. Instead, we have many ugly “historic” warehouses used as dark places to live.

The conversion of the Wytestone Plaza to apartments should be a win-win for Vakos and the City of Richmond. Vakos will receive the tax credits, and as reported there will be no exterior changes, the parking deck is in place, elevators are operational and so forth. That means that overall construction costs should be far less that building a similar building from the ground up.
Vakos should offer the City a small percentage of apartments, perhaps 5%, meeting workforce needs in return for the Special Use Permit.

The post development RE taxes will be hundreds of thousands per year. Vacos is repurposing a near empty office building into a viable living environment for hundreds of future downtown residents which is sorely needed. There’s no reason for Vacos to offer the city that deal unless the City agrees to offer something in return. An SUP should be encouraged by the City and should not be for sale. In essence, it would be another cash proffer with no supporting data to justify it.

“The elevators are operational.”
That’s… debatable.
The parking deck had nowhere near an adequate number of spaces to serve the most recent occupants. Even as apartments, I doubt there would even be enough for one space per unit. Not to mention the space is extremely tight and the lowest level routinely floods, rendering it unusable.

To clarify, a tax-credit recipient must adhere to the Secretary of the Interior’s standards for historic rehabilitation (https://www.nps.gov/tps/standards/treatment-guidelines-2017.pdf). DHR’s role, as the state historic preservation office, is to ensure that the standards are adhered to. If windows must be replaced, for instance, then the replacements must generally be replicas of the originals at the time of construction. It is also a requirement of the standards that the exterior appearance be as similar to the original construction as possible, which precludes punching holes for windows where none existed before. Experienced developers are well aware of these requirements.