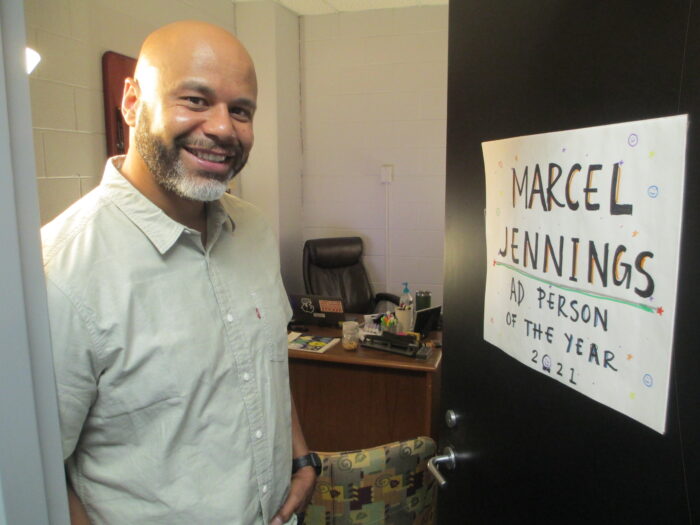 Marcel Jennings’ office door sports the sign his students used to surprise him about his Ad Person of the Year win. (Jonathan Spiers photo)

The honorary title of Richmond’s Ad Person of the Year didn’t travel far from last year to this year.

In fact, it went no farther than across an office hall within the T. Edward Temple Building that houses VCU’s Robertson School of Media and Culture.

This year’s recipient, Marcel Jennings, keeps office hours directly across the hall from Jess Collins, who received the distinction in 2021.

And elsewhere in the building is Scott Sherman, who the Advertising Club of Richmond named Ad Person of the Year in 2017.

That’s three academics who’ve received the distinction in a span of six years, a testament to the impact that the Robertson School and its faculty have had on the VCU grads in Richmond’s creative scene.

Jennings, an associate professor and associate director at the school, teaches the copywriting skills he picked up at such agencies as Fallon and Ogilvy & Mather in New York, DDB in Chicago, and Big River in Richmond.

While his full-time VCU gig keeps him busy, Jennings, who was tenured in 2020 after several years as an adjunct and assistant professor, keeps up his creative chops with side work as a freelance copywriter and creative director.

BizSense paid Jennings a visit at his office to learn more about this year’s Ad Person of the Year, his approach to teaching and creative process, and his thoughts on the Richmond scene he’s had a hand in preparing. The following is an edited transcript:

Richmond BizSense: Congratulations on your recognition. How does it feel to be Ad Person of the Year?
Marcel Jennings: It’s special. It means a lot to me, because the nomination comes from students. And it was super-unexpected. I had no idea that was happening at all. They told me a few weeks before the ceremony. Jess Collins, who sits right over there, she had won the year before and set up this whole surprise thing. She grabbed me after class and then I walk in here and they jump out with that sign.

RBS: You’re the school’s advertising sequence coordinator on top of your roles as associate director and associate professor. What do those roles involve, and what do you teach at the school?
MJ: I tend to teach some of the copywriting classes and some of the portfolio classes. I just approach that the way that I learned it and how I work. I try to bring that kind of real-world experience and process, and just put the focus on concepting and really thinking and solving problems. We do design work in the portfolio class, how to bring that stuff to life and what people who are hiring are looking for. I try to bring that to the classroom: how creative departments work. 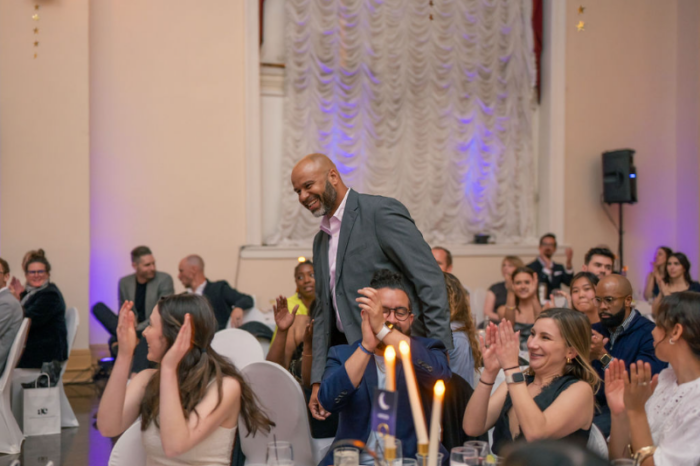 Jennings at this year’s Richmond Show, when he was announced as Ad Person of the Year. (On Three Photography)

RBS: What brought you to Richmond and VCU?
MJ: I was born in Germany. I’m half-German. My parents met over there when my dad was stationed there. We moved to Hopewell when I was in sixth grade, and we lived there until I went to work for the first time after (graduating from) Brandcenter.

My friend who teaches here, who I went to Brandcenter with, she’s like, “You should come adjunct.” I was like, “I don’t know what I’m doing.” (laughs) I taught a night class, a copywriting class called Perspicuousness, I did adjunct for about three and a half years, and then they had an opening. I was like, “I kind of love this, so let’s try it.”

RBS: What led you into copywriting as a career path?
MJ: We took a Myers-Briggs test in psychology, and I read the email: “Wait, that’s pretty accurate.” (laughs) Back then you would go to the library and pick out careers that match up with your type. I pull out this book and I’m thumbing through it, and it said advertising/marketing/creative director-type stuff. And there was a headshot of a dude, he had a push broom mustache and was on the phone and was drawing. I’m like, “I can grow a mustache!”

That led me to finding schools that had mass comm programs, so I came to VCU mass comm. And it was one of those things where, the timing: they had just launched a year or two before that a thing called Adcenter (now Brandcenter). I went and was like, “This is literally all the things that I like.”

RBS: Was it a tough decision to leave agency work?
MJ: Big River had a great life balance schedule, but overall, sometimes the industry can be tough on that. I really liked the teaching schedule. It allows you to have more family time. It’s busy, but you can structure it. And I also really liked being at this stage when people are trying to figure out what they want to do. It reminded me of myself a lot.

RBS: Were there ads or campaigns you worked on that people would know?
MJ: One of my favorites is when we were able to rebrand (in 2012) the Virginia Lottery when I first got to Big River, with Terry Taylor, who’s amazing and just a great human being. It was under him that we moved to the “We’re Game” campaign.

That was a lot of fun, because it was really wide open. We were breaking out of traditional media a lot at the time, the Game Guy events and social media, and it was just really interesting and we were able to do some new stuff. That felt almost more like entertainment, which I liked a lot. 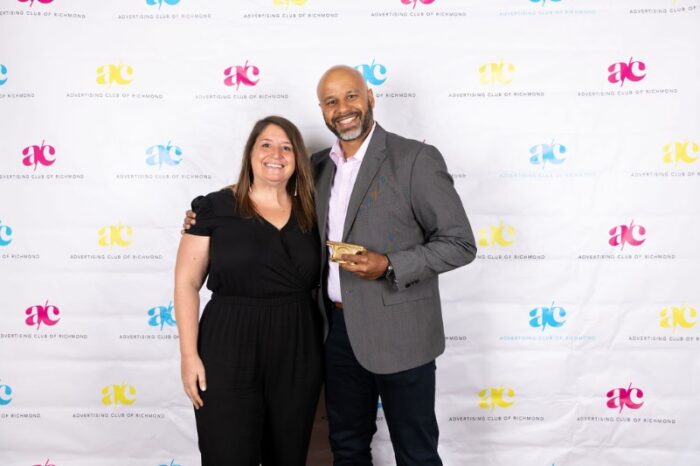 Jennings with Jess Collins, his Robertson School colleague and last year’s Ad Person of the Year. (On Three Photography)

RBS: You freelance in addition to your VCU work. How do you keep your skills sharp and stay up with trends?
MJ: TikTok. (laughs) That’s part of it. I try to read a lot, not only industry publications and insights but also what everybody is looking at. I talk to my friends and family who are in the business and are still on the front lines, so to speak. I bring people in to speak. I try to keep up with culture through social and movies and music.

I’m fortunate enough to where friends will call and they’ll say, “Hey man, can you help me on this?” And that’s cool, because then I get to show it to the students and talk about it in class. It keeps you sharp and lets you know, “Oh, you’ve got to do this differently now, it works this way.” I love that, because I love teaching, but I also love still doing it.

RBS: With your copywriting work, what’s your creative process? How do you approach an assignment?
MJ: Usually the first thing is I try to find out what’s interesting about it. There’s always something, and sometimes it’s right in front of you and other times it’s buried. Then I go, “What’s a fresh way to talk about it or present it or show it or design it?” Then I just start sketching and doodling and writing and rambling, and somewhere in there there’s two or three things that sort of make sense. It’s kind of chaos with a little bit of structure.

RBS: Having worked in larger markets like New York and Chicago, what’s your perception of Richmond’s creative scene? What’s the state of the marketing industry here?
MJ: I feel like it’s always right there doing some of the cool stuff. I think that’s in the culture of the agencies here and the people that work there. And the Richmond creative community, from the museums to the schools to the galleries to the music, I always feel like there’s a lot happening here and that it influences the ads. It’s always been strong and continues to be right there with the people that are doing the stuff that you see.

RBS: Which agencies in town turn your head? Who’s putting out work that gets your attention?
MJ: Martin Agency, of course. Familiar Creatures is cool. Fable is interesting. I’ll talk about agencies in class, and then oftentimes I start digging into what they’re currently doing so I can show students, and I’m like, “Well that’s cool, I like how they did that.” Those three come to mind. Arts & Letters, the work they did for ESPN I thought was really cool.

RBS: If you could ask someone you admire one question, who would that person be and what would you ask?
MJ: I would have to ask Michael Jackson a question. I would probably ask what’s your favorite flavor of ice cream or something silly like that, and then I’d ask how do you know when you like something you’ve done.