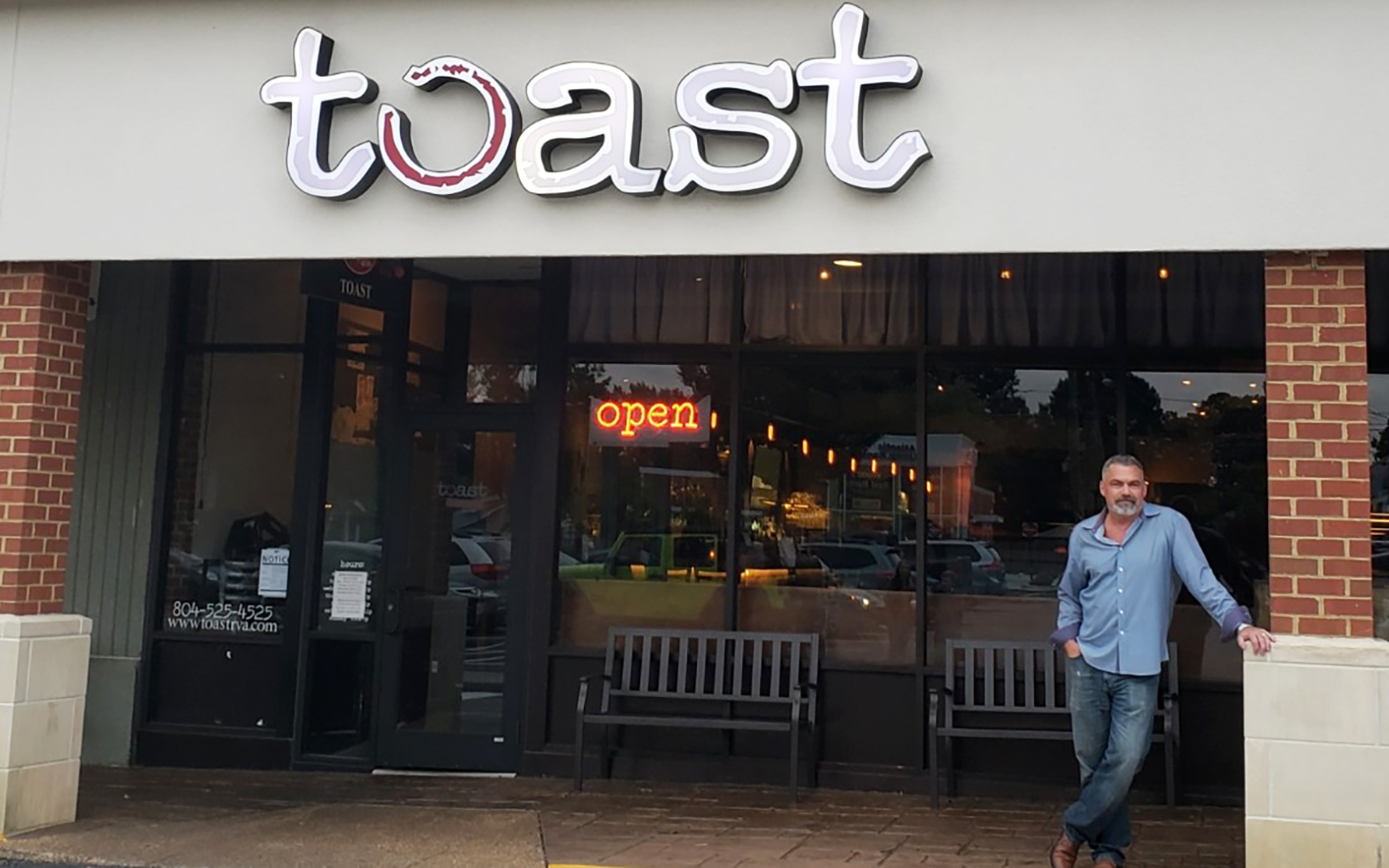 Jessica and Josh Bufford have sold Toast in the Village Shopping Center to Bob Graham, shown, a former member of the corporate team at EAT Restaurant Partners. (Photo courtesy of Bob Graham)

Jessica and Josh Bufford, founders of Toast, have sold the restaurant’s location in the Village Shopping Center to an industry veteran who’s donning an owner’s cap for the first time.

The Buffords continue to own and operate the Toast location at Winterfield Place shopping center, which they are expanding with an outdoor beer garden due to open soon.

Graham, who has more than 30 years of experience in restaurant management, said he had a business partner in his Toast venture but declined to name that person.

Graham is coming off a year-and-a-half tenure as area director at EAT. It was during his time as general manager of the company’s Wild Ginger restaurant in Midlothian that he became friends with the Buffords. The south-of-the-river Toast and Wild Ginger are in the same shopping center.

Owning his own restaurant has been a goal of Graham’s, one that became a conversation topic while socializing with the Buffords recently over drinks.

“I got to meet Josh and Jessica over there and we just sparked a friendship,” Graham said. “I always had that itch to run my own restaurant. It was probably two or three months ago we were all out just grabbing a drink after work and the conversation came up that they were trying to calm their lives a little bit.”

Jessica Bufford said that with two young children at home, she and her husband found the idea of offloading a restaurant appealing.

“We felt like it was the right time. We have a 4-year-old and 7-year-old at home and we’re trying to simplify our lives,” Bufford said. “We were happy running it. I didn’t want to just put it out there for someone to come along. It’s a good restaurant and I feel it serves the neighborhood and the neighborhood has been so good to us.”

Graham said the Village restaurant would continue to be branded as Toast and would largely have the same menu, though he has some latitude to put his mark on things. He’s considering the addition of a buffalo wings appetizer and new steak entree to the menu.

“I have always been impressed with the food and recipes, so that doesn’t feel like something I have to focus on too much,” he said.

He’s also tinkering with the restaurant’s booze offerings and wants to increase its bar business.

The Buffords, meanwhile, are weeks away from opening a beer garden in what was a grassy space next to Toast in Winterfield Place shopping center.

That area had served as impromptu, temporary outdoor seating during the pandemic. After conversations with the shopping center’s owner, Toast was able to add it to its lease to create a permanent outdoor component to the restaurant.

“This green space was just here and Powhatan County gave us the OK to do that for many months,” Bufford said. “Nothing was happening with this sliver of grass, so we talked to the landlord.”

In addition to beer and wine, the full-service outdoor area will feature its own small menu.

“The menu will be some of the greatest hits from our appetizers list and some pizzas. We’re upping our pizza game,” Bufford said.

The Buffords opened the Toast at the Village in 2012. They have operated other concepts over the years, including Hutch Bar and Eatery at 1308 Gaskins Road in Gayton Crossing, which is now Les Crepes.

The passing of the baton at Toast in the Village Shopping Center was first reported by the Richmond Times-Dispatch.