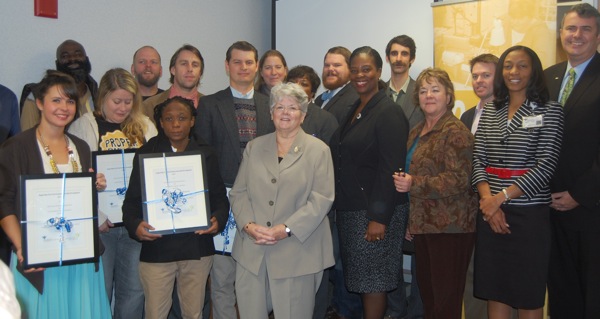 Seven East End startups got a shot in the arm Tuesday from a Richmond health-care company.

The program is part of an initiative by Bon Secours to stimulate growth in the Church Hill area, said Dougal Hewitt, a senior vice president at Bon Secours. Any startup in the 23223 zip code was eligible, and 17 companies applied. The organization’s Richmond Community Hospital is located near that area.

The startups received the money in chunks of $10,000 or less and can use it to buy equipment or expand their businesses.

This is the second year Bon Secours has awarded SEED money, and the company has set aside the funds for a third and final round next year. Three of this year’s winners – Sub Rosa Bakery, Proper Pie Company and J. Burton Hauling and Disposal – received prize money last year.

Allen Gray and Michael Johnson, All Around Painting

Great program, I hope they keep it up

How would I Apply for this Grant? I am a new Minority owned Biotech company located in Historic Church Hill. Located @ 602 north 29th street Richmond VA 23223
Please check out my website @