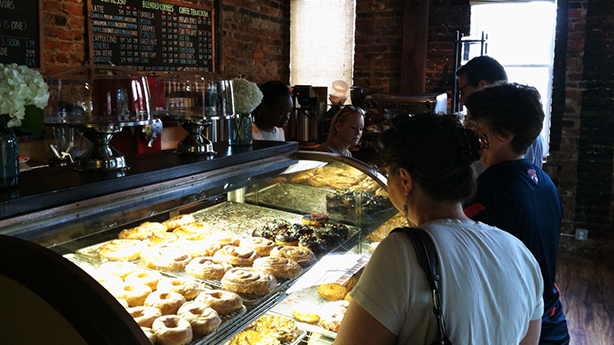 Richmond’s sweet tooth was out in full force Tuesday morning for the opening of Sugar Shack Donuts, a doughnut shop at 1001 N. Lombardy St. in Carver. 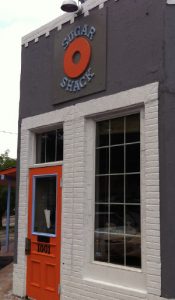 After months of renovations and waiting on permits, the shop opened to a crowd and had a line out the door for its first two hours in business. Owners Ian Kelley and Casey Ward had sought to open in April.

Sugar Shack limited customers to six doughnuts per order for the first day and offered an opening day special with all varieties costing $1 each. According to their Facebook page, they sold more than 500 doughnuts in the first hour and were completely sold out by 2:30 p.m.

Sugar Shack’s competition will also come from Dunkin’ Donuts, which has at least 10 locations within 20 miles of the city, and a lone Krispy Kreme store at the corner of West Broad Street and Staples Mill Road.

To paraphrase the Archangel Michael, as interpreted by John Travolta, you can never get too many donuts.

Great to see more local businesses starting up – much better than the chains!

I am so proud of you guys! Congrats Ian, the place looks beautiful and I can’t wait to come back for a visit and get me some delish treats.

Wow….I can’t think of many things I would 2 hours in line to get.

Leslie – the wait wasn’t that long. even though the line was out of the door when I got there it actually moved fairly fast. and the donuts were worth it 🙂

Swearing off the big chains. Between Sugar Shack and Dixie Doughnuts, you don’t need any massive corporations on the doughnut front.

But Sugar Shack will be nice for the days when I don’t want to drive out to the East End.