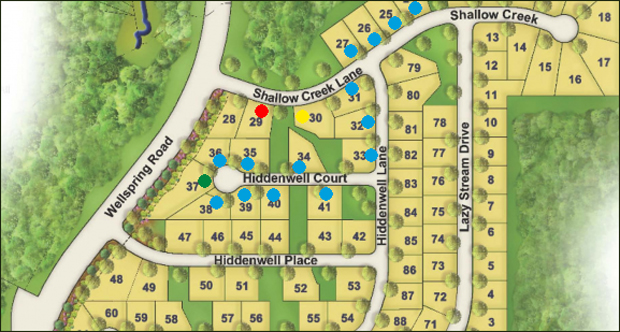 A map of phase 1 of the development. (Photo courtesy of HHHunt).

As winter comes to a close, another once-stalled area housing development is springing back to life.

Developer Waverton Associates and homebuilder HHHunt are beginning work on Wellspring Village, a 161-lot development off Harrowgate Road in Chester.

HHHunt General Manager Patrick McCarthy said construction on the neighborhood’s first house is set to begin. The development’s first phase is 88 lots. The initial section will be built on about 80 acres, according to Chesterfield County records.

“It’s been tough sledding but the interest list is growing,” McCarthy said.

Waverton Associates got approval for the construction in late 2011, but the project was put on hold because of the economy and a sluggish housing market, said Al Keene, chief operating officer of Portsmouth, Va.-based development firm.

One house model Wellspring Village home buyers have can choose from. (Photo courtesy of HHHunt).

With HHHunt on board as the builder, the houses at Wellspring will be mostly two-story, single-family properties and will range from 2,100 to 3,500 square feet, McCarthy said. A single-story ranch-style floor plan is also available.

Wellspring Village sits across Harrowgate Road from the Ashley Forest neighborhood, not far from Happy Hill Road. The development is about 10 miles northwest of Fort Lee.

HHHunt is using Bank of America to finance the Wellspring project, as well as its new section at Rocketts Landing, where it recently broke ground.

The projects are the latest signs of momentum in the local housing industry. Several other subdivisions in the region have new phases of development in the works, including Cedar Grove in northern Henrico County, and Stable Hill in Glen Allen. Magnolia Green has a new owner with construction financing lined up.

Waverton Associates’ other local projects include some single-family and-multi-family developments such as Meridian Watermark apartments in Chesterfield County, according to its website.