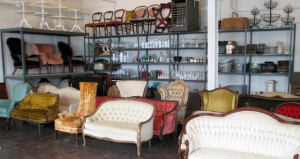 A Richmond furniture startup now has a bigger roof over its head.

Paisley & Jade, a 2-year-old furniture and décor rental company, last month leased 4,800 square feet in Scott’s Addition, making it the latest new tenant to drop into the developing the neighborhood.

The space at 3119 W. Moore St. will serve as a showroom and workshop for the business, said owners Perkins Morgan and Morgan Montgomery. A taxidermist and a tile restorer previously shared the space.

Paisley & Jade rentals have included everything from chairs and tables for large wedding parties, wooden benches for a television show filmed in Richmond to a stuffed duck named Fielder for photo shoots.

Chair rentals start at $50 each and sofa rentals begin at $125. The company services Virginia, Washington and parts of North Carolina.

Morgan and Montgomery find their items at auctions, consignment shops and the alley ways of Richmond. Their new digs include a workshop where they can refurbish items in need of a little sprucing.

Paisley & Jade join several other local companies that have located in Scott’s Addition as it continues to quickly evolve. Lamplighter Roasting Company and Isley Brewing Company have already set up shop on Summit Avenue. Urban Farmhouse has a café and market in the works. Another brewery, Ardent Craft Ales, is under construction.

“We’re (now) in an area with other creative businesses,” Montgomery said. “We’re two seconds away from Ardent Craft Ales.”

The neighborhood also has a growing influx of residential traffic moving in thanks to apartment developers taking over old industrial buildings.

Adding to the mix, Paisley & Jade is sub-leasing parts of their space to The Green Flamingo, a florist, and LoveBird Events, an event planner.

Morgan and Montgomery said they had been looking for a brick-and-mortar space since 2012 when they launched their business.

They used $75,000 of their own money, family help and a network of connections in the event planning world to get their start. Montgomery was from 2012 to 2013 the Richmond chapter president for the National Association for Catering and Events.

“We weren’t like ‘Hey, I saw something cool on Pinterest – let’s start a business,’ ” Montgomery said. “We had a business plan.”

In autumn 2012, they joined Blush on Berry, a wedding planning collective on Strawberry Street and kept their inventory in storage units. They did repairs and alterations in home workshops.

The company did about $50,000 in sales in 2013, Montgomery said. She said the company is on track to double that figure this year.

I’m surprised they didn’t go with the more obvious name choice: Morgan & Morgan. Maybe they didn’t want to be confused for a personal injury law firm.