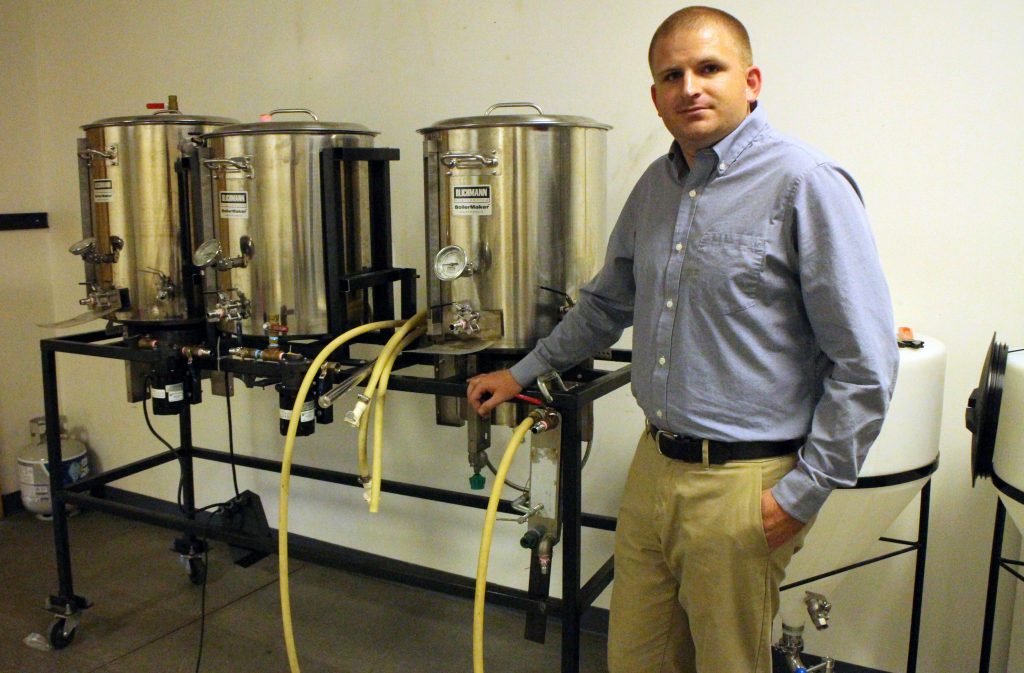 Brad Cooper is launching a brewery in Midlothian. Photos by Katie Demeria.

As one new local brewery prepares to open where few have gone before, two others are wading into the already brewery-filled area in and around Scott’s Addition.

Owner Brad Cooper, 28, said he’ll look to open in November and hopes to attract thirsty young professionals who enjoy the brewery-related amenities that are prevalent in the city but who have moved to the suburbs.

“Just because they’re married doesn’t mean they stop going out,” Cooper said. “There’s definitely a hole in the market on this side of the river.”

There is at least one other brewery in Midlothian: Extra Billy’s Smokehouse and Brewery at 1110 Alverser Drive. It opened in 2000 and is 8 miles from where Steam Bell is rolling in. The other area brewery that’s south of the James is craft beer stalwart Legend Brewing Co. in Manchester within the city limits.

“Chesterfield is definitely a prime location,” Cooper said. “The only option (to visit breweries) is to drive into the city. I want to bring that option out here.”

After much debate about whether he should open a brewery of his own, Cooper made up his mind when he was fired in September from his job doing quality assurance for mines. Confident the corporate world will always be there as a fallback, Cooper took the chance to pursue his own business.

“I bit the bullet, sold my brand new truck, and moved back in with my parents for a while,” Cooper said. “I’ve been homebrewing since I was 21. This has been a dream of mine for a long time.”

In addition to homebrewing, Cooper volunteered with Hardywood Park Craft Brewery as it was opening a few years ago and eventually became a part-time assistant brewer there. He also for a time worked for Old Dominion Mobile Canning, which has developed its own niche in the local brewery market.

Part of Cooper’s confidence comes from the response he has gotten over the years to his beer. Both contests and friends have told him what has worked and what hasn’t.

“Getting blind feedback from people that don’t even know you – critical feedback is definitely important,” Cooper said.

Cooper said there will be between four and six beer offerings at Steam Bell. He aims to focus on saisons, farmhouse ales and sour beers.

The space, which was previously used to manufacture boilers, will have a tasting room, as well as a production area for Steam Bell’s seven-barrel brewing system. Some of the company’s hops will come from nearby Piedmont Farm. Cooper said he is in talks with local distributors.

Cooper said he expects it to cost about $300,000 to open Steam Bell. He’s getting help with financing from family and friends. Kettner Design Group is the architect for the brewery, and Jeff Stoker Construction is handling renovations. 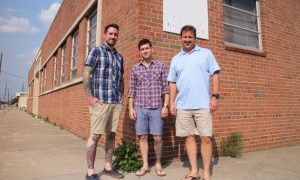 From left: Matt Tarpey, Dustin Durrance and Dave Michelow are bringing another brewery to Scott’s Addition.

Back across the river, a new beer venture is testing one neighborhood’s brewery capacity, while another is taking space right behind one of the pillars of Richmond’s craft beer scene.

The Veil Brewing Co. will start work next week on its 11,000-square-foot brewery in an existing building at 1301 Roseneath Road in Scott’s Addition.

Friends Dave Michelow, Dustin Durrance and Matt Tarpey are behind The Veil, which will look to open in November.

Tarpey will lead The Veil’s brewing operations. He said he gained experience through an internship at Cantillon Brewery in Belgium.

It was there that he learned from the master brewer, Jean van Roy, about spontaneous fermentation and pellicles, a protein-based membrane that forms on the top of the beer and creates a layer to protect it within its oak barrels.

“Jean told me that the Italian and natural wine makers call pellicles ‘the veil,’” Tarpey said.

Michelow, Durrance and Tarpey plan to do some spontaneous fermentation brewing of their own, which allows beer to ferment through wild yeast in the air, rather than by adding yeast to the product.

But it will be three to four years before those batches can be sold. The group has secured a warehouse on Dabney Road where they can store those barrels long-term.

Otherwise, The Veil’s 3,000-square-foot tasting room will offer three to four staple varieties, with some seasonal offerings available throughout the year. They plan to bottle and distribute their products, as well, and have not yet signed with a distributor.

The Veil will be the third brewery to set up shop in Scott’s Addition, joining Ardent Craft Ales and Isley Brewing Co. The fast-growing neighborhood has attracted other booze-related startups, including Black Heath Meadery and the forthcoming Buskey Cider. Blue Bee Cider is looking to move into Scott’s Addition from Manchester.

Local developers Charles Bice and Birck Turnbull are also involved in The Veil and are heading up work on the building. They purchased the 0.5-acre parcel for $670,000 through an entity called High Summit Partners LLC. Michelow, Durrance and Tarpey have created a joint venture with Bice and Turnbull called Roseneath Brewers, which will eventually own the building.

The group declined to share the total cost of opening the brewery, but said they are financing themselves. 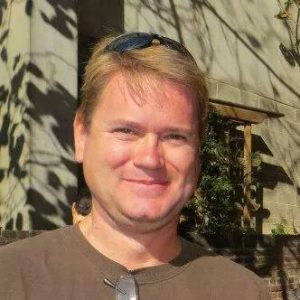 Over near the Diamond, Castleburg Brewery & Taproom announced last week that it has leased 2,700 square feet at 1626 Ownby Lane, just around the corner from Hardywood.

Owner and head brewer Karl Homburg said in a release last week that he is now applying for approval from the federal Alcohol and Tobacco Tax and Trade Bureau and ordering brewing equipment. Castleburg will look to open in December with the capacity to produce 300 barrels of beer each year.

Got y’all covered in the directory on the Cheers Virginia site! Looking forward to a visit when y’all open your breweries up!