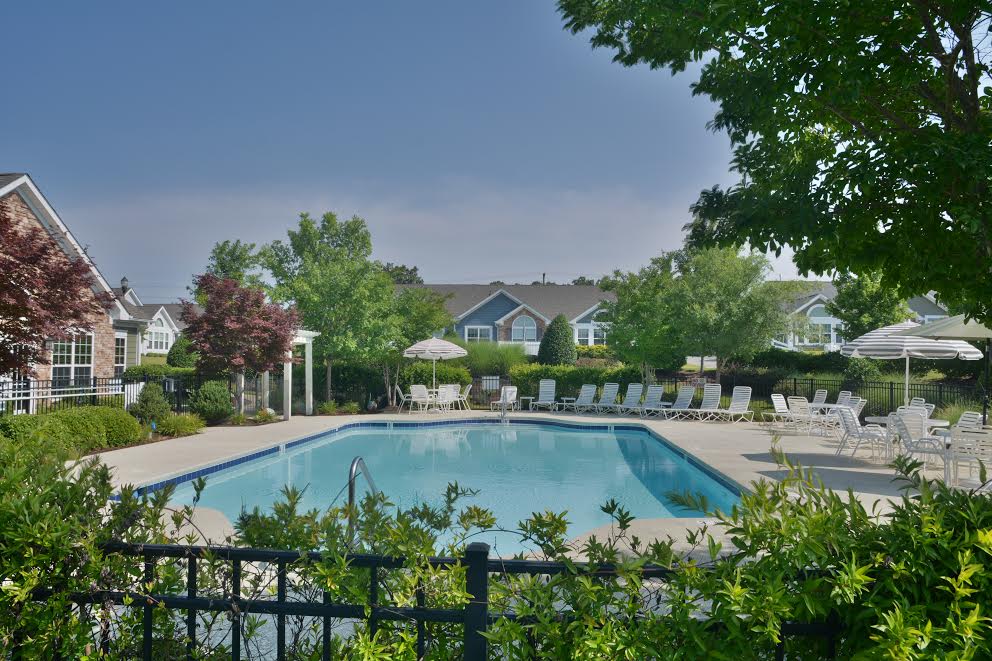 Villas at Ashlake will be similar to another Cornerstone development called Apex in North Carolina. Photo courtesy of Cornerstone Homes.

Encouraged by the success of a similar project in Chesterfield County, a local builder has its eye on another development targeted at retirees.

Cornerstone Homes has plans to develop 82 age-restricted homes on about 20 acres in western Chesterfield. The community, dubbed Villas at Ashlake, will be comparable to another development in the eastern part of the county, the Villas at Magnolia Lakes.

“That project (Magnolia Lakes) has been so active and so successful since we more or less reopened it a year and a half ago, we immediately started looking for another location in Chesterfield County,” said Roger Glover, Cornerstone’s owner.

He found that location near the intersection of Ashbrook and Ashlake parkways. Glover has 20 acres under contract at 7501 Ashlake Parkway, he said, but declined to share the expected purchase price.

The two-bedroom, single-level homes will cater to buyers ages 55 and up and will range between 1,600 and 2,400 square feet. The homes are attached in a “spin-wheel design,” Glover said, that involves clustering four homes together so each seems to have its own unique entrance.

Amenities include all maintenance services, along with a clubhouse and pool, and each home will have access to either its own private courtyard or sun room.

“Most of our residents have already been long-time Chesterfield residents who just want to downsize,” Glover said. “We really create and sell lifestyles; the home is the extra benefit.”

The project is expected to cost about $20 million. Cornerstone does its own land development and construction. The Johannas Design Group is the architect. 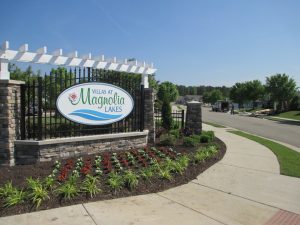 The first 110 new homes in Villas at Magnolia Lakes should be finished by the end of next year. Photo by Jonathan Spiers.

Villas at Ashlake is set to go before Chesterfield County’s Planning Commission in February, then will seek approval from the Board of Supervisors. Cornerstone is working with Hirschler Fleischer attorney Jim Theobald. Once approval is secured, Glover will then seek to finance the project with a bank.

Site development should start in the fall of 2016, and the first homes should be delivered in early 2017. They’re expected to be priced around $300,000.

“The 55-plus bubble is the largest (demographic), and it continues to grow,” Glover said. “A lot of homes now are $400,000 or more, and those people who are retiring and seniors, they’re looking to downsize. They’re not looking for a 4,000-square-foot home.”

Glover said that by 2030, the population of individuals over 50 years old is expected to reach 132 million, according to a study by the Joint Center for Housing Studies at Harvard University.

The market preparing to cater to that demographic is broad, he said, ranging from independent living like that offered at the Villas at Ashlake to assisted living facilities. The Richmond market has seen an influx of such developments in recent years across that spectrum with 55-and-up subdivisions rising in Chesterfield, Goochland and Hanover and assisted living facilities popping up all over the region.

“It really is a huge market with multiple niches,” he said. “I think you’ll see some potential for overdevelopment or saturation in particular niches, but overall keeping up with the multitude of demands is going to be a challenge for developers.”

Villas at Ashlake is meant to allow residents to remain at home, providing floor plans that make life easier for an aging resident while still allowing them to live independently.

“Existing developments and subdivisions aren’t set up to properly house seniors,” Glover said. “I think what you’re really seeing is the developers trying to catch up with the demand rather than creating the demand.”

Cornerstone still has room to grow in Magnolia Lakes with about 30 acres left to build out. The development has two phases planned, one with 110 attached homes that should wrap up by the end of 2017, and the second for 50 detached single-level homes that should be finished up by 2018 or 2019.

“Of the 110 homes in the first phase, all but a handful are already closed, under contract or are lots under reservations,” Glover said. “There are only four lots left at all. So really, for us, we just need to build faster.”

Founded in 2001, Cornerstone works in Virginia and North Carolina and has developed seven communities in those two states. The builder is working on the 400-home Chickahominy Falls in Hanover County, which is not age-restricted, and is also starting site work for another 125-home age-restricted community outside of Fredericksburg.

It’s great to have Cornerstone building in Richmond, and filling a niche market that will continue to grow over the next decades. They have a terrific product.

You can see all available homes for sale at The Villas at Magnolia at 55places.com, the web’s #1 resource for researching active adult communities.