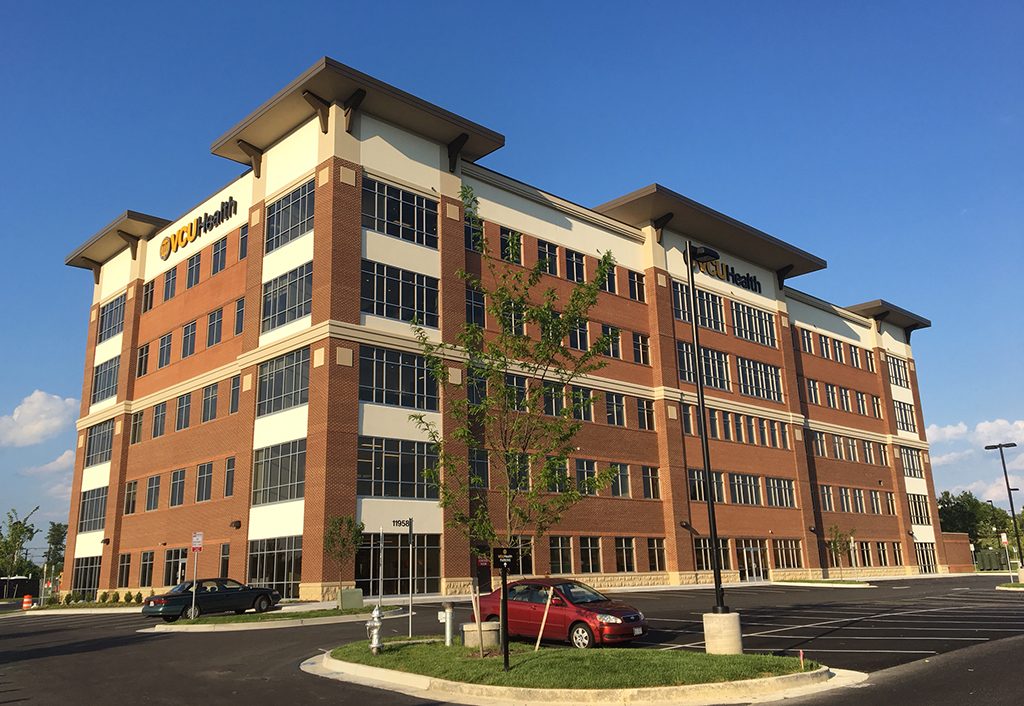 Construction is still being completed on the building’s fifth floor.

A recently developed medical office building and nearby parking lot in Towne Center West in Short Pump are now owned by VCU Health.

VCU Health System Authority acquired the 111,000-square-foot, five-story medical office building at 11958 W. Broad St. earlier this month for $39.99 million, according to Henrico County records. It paid an additional $3.9 million for the 4-acre parking lot behind it at 220 Towne Center West Blvd.

The two transactions closed May 10 and in both cases, the sellers were entities controlled by developers Stanley Shield and Jimmy Stanley, whose company Stanley Shield Partnership developed the property as part of a 12-acre, multi-building project that began in 2014. VCU was the first tenant to sign on for the project, taking a lease for the entire building.

Now as the owner, VCU is using the property as home for its Neuroscience, Orthopaedic and Wellness Center. The multispecialty physician practice began operations May 2 under the direction of Dr. Kevin Hoover, Dr. William Jiranek, Dr. Bruce Mathern, and Michael Vasell, the director of the N.O.W. Center.

Jiranek said the idea for the N.O.W. Center has been years in the making and aims to bring an array of services related to neuroscience and musculoskeletal under one roof.

“The idea was interdisciplinary care,” Jiranek said. “Medicine tends to be made up of a bunch of silos, yet we all touch the same patients. There’s a feeling in medicine that we have to go away from the silos.”

Hoover said he and his colleagues visited similar institutions across the country like the Mayo Clinic and the Cleveland Clinic to observe how VCU Health’s peers are “pushing the envelope” with multidisciplinary care.

“We’re trying to create a destination of healthcare focused on neuroscience and musculoskeletal,” Hoover said, adding nearby amenities like the Hilton Richmond Hotel & Spa and Short Pump Town Center should help the N.O.W. Center compete on a regional and national level.

Vassell said the N.O.W. Center employs more than 150 workers. After the out-patient clinic is fully operational in June, it will see more than 250 patients per day.

The foot traffic at the medical office building will add to the hustle and bustle underway in that part of Short Pump. Stanley Shield Partnership announced in April it was part of an investment group building an air sports park at 205 Towne Center West Boulevard, and a two-story, 22,000-square-foot dental office is under construction nearby.

As VCU Health’s purchase in Short Pump marks its furthest push west, it adds to the university’s steady stream of real estate acquisitions and new construction around the Richmond region. In the city, the school has a $96 million dorm project in the works and recently bought and razed the former Sahara restaurant on Grace Street and the Belvidere Medical Center building in Jackson Ward.