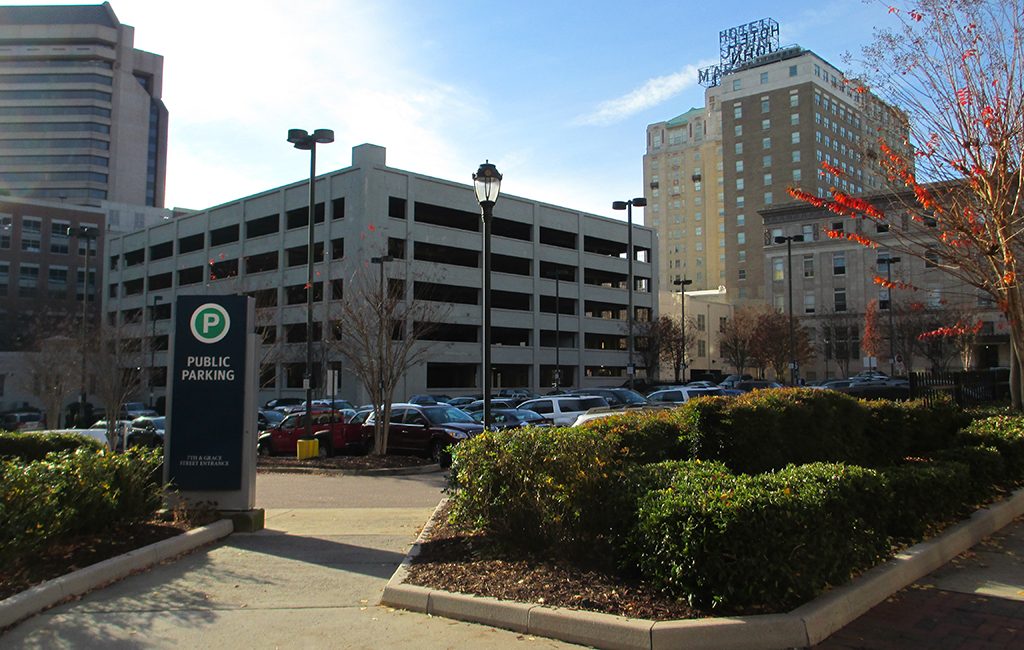 A view of the proposed development lot from Grace and Seventh streets. (Jonathan Spiers)

One of the biggest new construction projects proposed downtown in years appears slated to fill the bulk of a city block beside Richmond CenterStage and the Hotel John Marshall building.

Developers are eyeing about three-fourths of the block between East Grace and Franklin streets and North Sixth and Seventh streets for an $86 million mixed-use development. It would include at least 372,000 square feet of commercial and residential space above an 800-space parking deck and 28,000 square feet of street-side retail space.

The project, preliminary in design, could include a tower rising as high as 18 stories, as shown in renderings presented to the Richmond Planning Commission on Monday. It would replace or add onto a six-level parking deck and surface parking that currently fill the block. It would not involve four privately owned parcels at the corner of Franklin and Seventh streets.

The commission endorsed a request from the city’s planning and economic development departments to declare the city-owned properties surplus and sell them to City Center Development LLC, an entity led by Robert Englander of locally based Cathford Consulting, whose projects have included the Turning Basin building in Shockoe Slip.

Englander worked on that project with local construction firm Taylor & Parrish, which is working with Cathford on this project. Local firm Price Studios is the designer.

“Our goal is to make this a destination project–an architectural gem,” said Brent Graves, a principal with Taylor & Parrish. 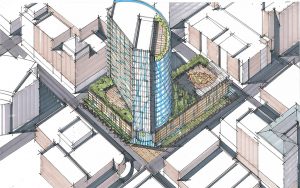 If approved by City Council at its meeting next Monday, the sale – at $3.95 million – would open the door for the team to move forward with a design and secure commitments from investors and potential users and retail tenants. Englander said no such commitments could be secured before the entity gained control of the property through a sale.

Englander said they approached the city in July 2015 about purchasing and developing the properties, which total just over 1.5 acres. He said the purchase price takes into account the costs of potential demolition or renovations that would be required for the existing parking deck structure, which was built in 1927 and would need to be updated to accommodate today’s larger vehicles.

Englander said the project would likely be built in phases, with the parking deck and retail forming a “podium” upon which the residential and commercial uses would be built in a subsequent phase. He said the project could involve a hotel component with 100-150 rooms, as well as a restaurant and garden terrace amenity on top of the base parking structure.

Englander said the development would likely exceed the $86 million minimum taxable value that the city is requiring as part of its agreement. He said the project could require as much as $100 million worth of development and construction, $1.4 million worth of demolition, and create at least $1 million in property taxes and other potential revenue such as lodging tax on property that currently produces no tax revenue to the city.

The building, or buildings, would consist primarily of metal and glass facades with some masonry worked in.

The city agreement required that development be completed five years after the developer closes on the property. The first phase, involving the retail and parking structure, of which 600 spaces would be available for public use, would be built within two years, according to the requirements.

Commissioner Vivek Murthy questioned whether the property should be put on the market to determine its highest and best use, contending that the project as presented sounded like a “closed deal.” City planning staff also appeared unfamiliar with the project, as commission chairman Rodney Poole encouraged Englander and his team to work with them in the future. 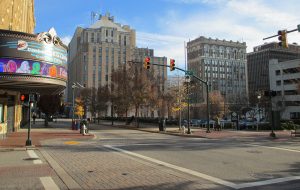 A view of the lot from Grace and Sixth streets. (Jonathan Spiers)

Englander stressed that the project is in its preliminary stages and depends on the sale before more work can be conducted. He said they had met with planning staff, city administrators and all members of City Council since presenting the proposal last year.

“I think what we’re offering from an amenity standpoint was in line with what the city wanted to see for that site,” Englander said. Poole added that other bidders who may be interested in the property can make an offer at any time, noting that the item was advertised as part of the meeting agenda.

The proposal comes at a time of renewed interest and investment along East Grace Street, where several restaurants have opened in recent months. Shamin Hotels recently purchased the nearby Berry Burk building from Jim and Ted Ukrop; and an affiliate of Shamin Hotels purchased a 48,000-square-foot building at 501 E. Franklin St., where it is planning an 87-room hotel.

In other business at Monday’s meeting, the commission recommended approval of a special-use permit for Scott’s View, a mixed-use development proposed by Historic Housing. Plans call for 364 dwelling units and commercial space in two six- or seven-story towers to be constructed at 1400 Roseneath Road.

Bob Englander is back in action with a tremendous plan. I hope the City pushes this one thru the system to fruition.

I like the tag at the end of the article about the advancement of the Scott’s Addition property. This city is growing all over!