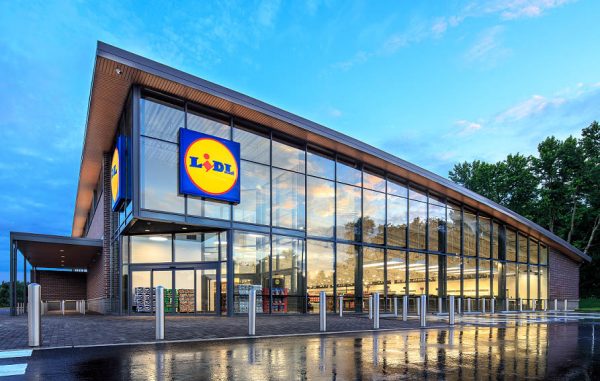 Lidl built a test store for its U.S. designs in Fredericksburg. (Courtesy Lidl)

A German grocery chain that’s preparing to open its first wave of U.S. stores has added another plot of land to its profile in the Richmond market.

Lidl purchased 7.53 acres at 6030 Iron Bridge Road in Chesterfield County for $1.73 million, according to broker C.J. Blankenbeckler, whose Blankenbeckler Real Estate represented the sellers in the June 2 deal.

The land is west of Meadowbrook High School, near the intersection of Iron Bridge and Cogbill roads.

The land most recently was assessed by Chesterfield County at $352,100. The sellers were George T. and Luann A. Andreadis, according to county records. The land currently houses a used car dealership and a meeting hall, which are roughly 1,500 and 6,000 square feet, respectively. Both buildings will be torn down.

Lidl spokesman Will Harwood wouldn’t comment on the deal.

The Iron Bridge deal is Lidl’s eighth in the Richmond market, and its second in 2017. Earlier this year, the grocer purchased the former Colonial Downs off-track betting center at 4700 W. Broad St. for $3.4 million. Demolition is underway at the former gambling hub.

Lidl is preparing to open its first Virginia stores in Hampton and Virginia Beach next week. No dates have been declared for the opening of its Richmond region outposts, but it has announced they’ll open this summer. It began hiring for its area stores in January.

The European grocer will open as many as 100 stores along the East Coast. Construction of its location at Short Pump development GreenGate will finish this month, as well as its store at Staples Mill and Hermitage roads.

I could not be more excited!!!