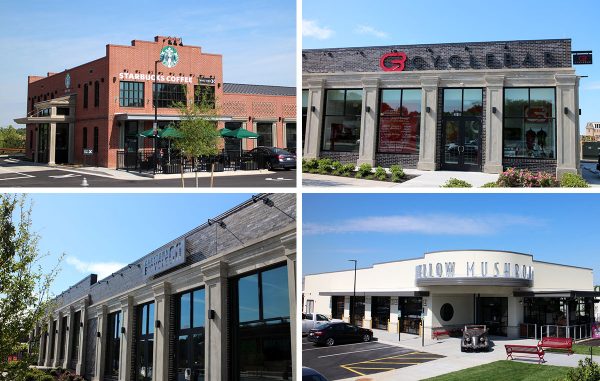 Starbucks and Mellow Mushroom launched at Greengate this month, and Cyclebar and Carytown Bicycle Co. locations are soon to open. (Mike Platania)

Nearly five years in the making, the gates at a major development in Short Pump are beginning to open.

GreenGate, a 75-acre mixed-use project on West Broad Street by Markel | Eagle Partners, has its first wave of commercial tenants opening their doors, with others on the way.

CycleBar, a national chain of cycling gyms, will open May 11, with neighbor Carytown Bicycle Co. set to open later this month.

The CycleBar location is run by local franchisees Donna Suro and Libbie Crane. GreenGate will be CBC’s third location.

J.B. Gurley, a Markel principal, said other eateries within the development are on track to open this summer.

“The Daily (Kitchen & Bar) and Red Salt (Chophouse & Sushi) will be ready in about July,” Gurley said.

Also from RRG in GreenGate will be Coast, a spinoff of its Carytown seafood restaurant, East Coast Provisions. Gurley said Coast would be ready to open in fall 2017. 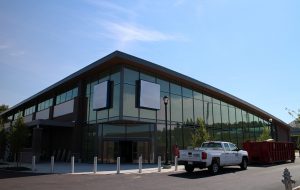 Lidl’s 36,000-square-foot building will be complete in June. (Mike Platania)

“We have a real bias toward local tenants, and it’s reflected in who we’ve signed to date in some degree,” Gurley said. “There are good national tenants we’d love to have be a part of the development, as well.”

GreenGate is anchored by German grocer Lidl, whose 36,000-square-foot building will be complete in June, Gurley said. Lidl will have seven stores in the Richmond area, which it announced would all open in one wave this summer, though an exact date hasn’t been announced.

It’s not only GreenGate’s retail and restaurant spaces that are being snatched up.

Last week Tuckahoe Orthopaedics announced it will open a 14,800-square-foot office in the development – the first office tenant to sign on. It will be the medical group’s fourth location.

GreenGate will have two 45,000-square-foot office buildings, and Gurley said construction would begin on the first one in the next two months.

With townhomes in the middle of the project and single-family houses on the perimeter, Gurley said the company has sold over 20 townhomes, of which it has built seven. He said GreenGate’s first resident may move in as soon as June.

“We have some other tenants coming in that we’re getting ready to announce,” Gurley said.

Markel put GreenGate into motion in late 2012, when it purchased the land for $8.5 million.

It was one of three major developments announced around the same time that showed the boundaries of Short Pump would continue pushing west. GreenGate is joined on that stretch of Broad Street by the Wegman’s- and Cabela’s-anchored West Broad Marketplace, and Atack Properties’ 70-acre, Aldi- and Bon Secours-anchored Broad Hill Centre.

And it’s still short pump, voted what, the #2 or #1 most boring place in VA to live?

Short Pump is a cluster cluck of development. I’m old enough to remember when it was nothing more than a stop light and a corner gas station. It could have been planned out so much better but instead it’s a hodge-podge of commercial and residential development, especially down the Broad St corridor. Instead of a destination it’s become a place outsiders of Short Pump avoid.

Bert, the Broad St corridor is all commercial development. I’m not sure what you’re referring to when you say that it’s a hodge-podge. If anything, I would argue that Innsbrook was poorly planned out, but the county and developers are working on fixing that now with more mixed use builds. Short Pump and Innsbrook don’t need to be a destination for the rest of RVA if the people living in the area are happy.