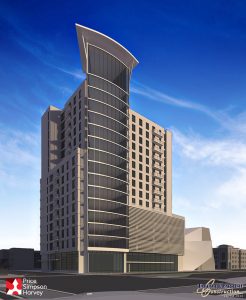 A rendering of the proposed tower.

The final piece of the puzzle for a fast-transforming city block in the heart of VCU appears to be in place – and the university isn’t the one putting it there.

Despite interest from VCU, local businessman Steve Uphoff is pushing ahead with his plan for an 18-story tower on his Sunoco gas station site next door to the under-construction Institute for Contemporary Art.

Work is underway to tear down the station at the corner of North Belvidere and West Grace streets to make way for the 209,000-square-foot tower, which would consist of 129 apartments, a pharmacy and other retail on the ground floor, and above that a one- or two-story location of Uphoff’s bowling alley chain, Uptown Alley.

The projected $100 million project would fill the quarter-acre lot at 600 W. Grace St., where crews with Mid-Atlantic Construction were preparing to demolish the gas station and remove its underground gas tanks. Uphoff, known for his chain of Uppy’s Convenience Stores and gas stations, purchased the property in 2007 for $1.1 million, according to city property records.

Uphoff originally had planned a six-story tower with a gas station on the site. He said a deed restriction that required the gas station has since expired, and that existing zoning and conditional-use approvals allow for the mix of uses and 18-story height, which he said would make it the tallest building in Richmond based on physical elevation.

Uphoff said Monday he’s aiming for construction to start in October – the same month the neighboring ICA is scheduled to open. Construction would last 18 months, he said.

“We’ll be shadowing the contemporary art building, unfortunately, which will be below us,” Uphoff said. “Not that we want to be any more dominant than they are, because they’re a gorgeous building. We’re going to build a gorgeous building next to them.”

Uphoff said he has been in talks about the property with VCU, which has been purchasing more properties and clearing others it owns in the vicinity of the ICA – a $41 million, 41,000-square-foot facility taking shape at the corner of Belvidere and Broad.

He said his planned project’s return on investment and future revenue stream are more appealing to him and his investors than selling the property to VCU, which has been paying upwards of $2 million for comparable properties in the area. 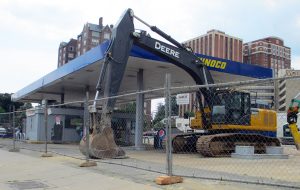 Work is underway to tear down Uphoff’s Sunoco gas station at the corner of North Belvidere and West Grace streets. (Jonathan Spiers)

The university paid that amount last fall for the adjacent Evergreen site, $2.2 million in 2014 for a nearby apartment building that likewise has been demolished, $3.15 million in 2015 for the former Hess gas station property on the other side of Belvidere and, just last week, $2.8 million on a former fast-food property next to the Hess site.

“We’re one of the few pieces of property that remain that VCU hasn’t gobbled up,” Uphoff said. “VCU has obviously been trying to acquire the property, but we want to build our proposed development.”

That development, Uphoff added, “will potentially create multiple times more money for us as investors than the front payment we would get if we made a onetime transaction.”

Reached Monday afternoon, VCU spokesman Michael Porter said the university had no comment on the project.

Uphoff said the timing has to do with Sunoco’s lease expiring this month. With that lease coming up and the deed restriction requiring that use no longer an issue, he worked with local architecture firm Price Simpson Harvey to take the design to greater heights. Taylor & Parrish, which constructed the Uptown Alley in Midlothian, is signed on as the general contractor.

“We looked at the market and decided that there’s a need for some really nice apartments in that market, and we needed to have more scale to make the project work, especially with the parking,” Uphoff said. “So the design just kept getting grander and grander.”

Uphoff described the apartments as high-end, with balconies and terraces adding to their square-footage. Unit footprints would range from 450-square-foot studios to a 2,400-square-foot three-bedroom penthouse, according to information provided by Price Simpson Harvey. The building would also include a top-floor infinity edge pool.

The apartments would fill 109,000 square feet of the building and include 96 one-bedroom units, 20 two-bedrooms, 12 studios and the penthouse. Uphoff said rents are to been determined.

“It’s a very high-end, nice facility to try to augment the growth that’s associated with that part of the city,” he said.

While the building will loom over the ICA site, Uphoff said he wants to be good neighbors with VCU, which he said has indicated a need for space in his building to put on additional art events.

“We’ve offered to provide that space for them,” he said. “We’re going to be good neighbors, not adversaries.”

Good for Uphoff! This is forward thinking! Uptown Alley on the Broad Street corridor will be a phenomenal test of that product. It obviously works in suburban Midlothian but entertainment options there are bit constrained compared to the City, and the demographic is much much different. Regardless, I applaud him for his courage.

Shouldn’t this story be titled “Steve Uphoff employs stunt to up the price VCU pays for gas station”?

In Uphoff’s request for a SUP, he told the Board of Zoning Appeals that the property had a restrictive covenant that required gasoline to be sold on the property until the year 2020. How is he able to violate the covenant now?

That is an abominable rendering. It has to be a negotiating ploy because way too much effort went into making it an amalgamation of everything ugly built in Virginia over the last 60 years…

Looks cool. Uphoff is planning to go all the way up. Curious how tall it’s actually going to be? 18 stories is obligatory.

Finally something nice looking for the skyline. Reminds me of a tower I saw in Boston.

I’ve been told that The VCU Foundation actually paid WaWa $6M for the corner on the east side of Belvedere. They paid $3.15M for the land and another $3M as compensation for loss of revenue.
Question for someone in the know: does the Foundation pay real estate taxes? I believe that they do. If it’s not directly owned by VCU the school as an academic function, then the property is subject to taxation. Apartments for instance would be taxed but the art school would not be.

I couldn’t agree more with Julie’s assessment. More thoughtless design to clutter our beautiful city. No sense of context, scale, proportion, massing, texture…utterly insensitive. Hard to imagine how one conceives such a hideous proposal next to the ICA. Uphoff and his team need to go back to the drawing board on this one…or better yet, permanently file it away in the paper architecture drawer.

While the design may need lack subtleties, the building as a whole is a huge upgrade from the new art museum it sits next to. The ICA design is an overpriced, missed opportunity.

ICA. What a waste. I cringe every time I drive by.

There better be PLENTY OF PARKING included.

Why would they need parking? This is going to be on the Pulse line. According to the experts Pulse is going to solve all our problems.

That is one ugly building.

Looks like there are two other renderings for the site. So it seems like that may not be the final design . Check out the price design website.

RVA is a beautiful outdoor city. The windows should be floor to ceiling sliders that open to large usable balconies. But, unfortunately, the windows are small Cold War era bland and the few random balconies are anemic and uninspiring. If this is to be a signature high rise, the design needs to reflect Richmond’s historical architecture on the lower 5+ street levels and then transition to a residential design that homebuyers want in today’s world – bring the outdoors in with big usable windows and large balconies for entertaining. Otherwise, this building will go out of favor as soon as… Read more »

My immediate thought when reading the story was one of horror. Instead of wrecking the view of the gleaming new ICA building, Steve Uphoff should build another one-story Uppy’s. It would be better in every way than his 18-story behemoth.

Yes. What I find funny is the whole “the Museum is gorgeous” narrative. This building could no doubt be better, but the fact that intellectuals are persisting in their “The Emperor DOES have clothes, it is a rich brocade, elegantly tailored” when applied to totally arbitrary-looking shapes that don’t look like things designed for human use and mostly defined by “absence” and “expensive problems for professional builders to try to solve, leaks to be discovered later.” Bold. Innovative. Beautiful. Maybe in 1962, but we’ve since learned, at least outside of the Ivory Tower, that these structures are pretensious. Meanwhile, this… Read more »

In 100 other locations, it would be fine. Increased density. Downtown residents. Doesn’t block views of the river. Takes advantage of the Pulse. Some retail and entertainment. And while it’s architecturally uninspiring, it could be worse.

Sadly, what will ultimately define Uphoff’s building is the way its muscular mediocrity looms over what will be (or would have been) one of RVA’s most iconic buildings.

This building will not ruin the ICA. Everyone calm down.