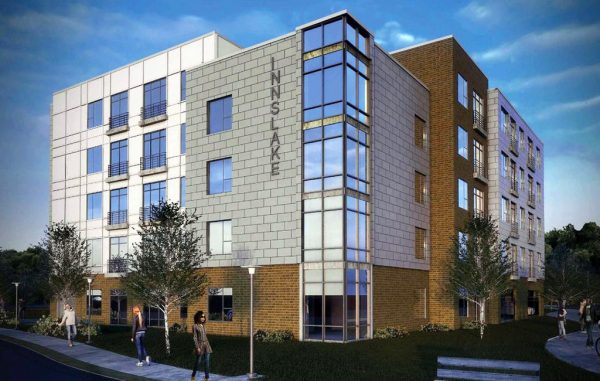 Rendering of one of the two apartment buildings planned for Innslake Place. (Henrico County)

A group of investors looking to transform a portion of Innsbrook into a more dense mixed-use development has enlisted a local developer to make the project reality.

WAM Associates LLC, led by Joe Marchetti Jr., has enlisted WVS Cos. to develop two apartment buildings and a structured parking deck around an existing office building at 4235 Innslake Drive.

WVS, the developer behind Rocketts Landing and the Locks, is partnering with Marchetti’s group on the project, guiding it through Henrico County’s development review process and bringing in additional capital, said Richard Souter, WVS’ executive vice president.

“We’re partnering with Joe and bringing some external money to the project,” Souter said. “Joe’s bringing land, we’re bringing development expertise, and we’ve got some other people bringing money.”

Called Innslake Place, the project would add 350 apartments and 261 parking spaces in a three-level deck to the 4-acre parcel at Innslake Drive and Dominion Boulevard. The two five-story apartment buildings would be built on both sides of an existing 28,400-square-foot office building, which houses Benchmark Mortgage Cos. With existing parking, the new deck would bring the total number of spaces on the site to 329.

The project received rezoning approval in April – among the first to do so under Henrico’s new urban mixed-use zoning designation. More detailed plans for the development are scheduled to go before the planning commission Wednesday.

If approved, Souter said, the project would go forward as soon as possible, though he said there is no firm start date for construction. He said a project cost has yet to be determined.

Souter said he and WVS principal Jason Vickers-Smith had begun eyeing Innsbrook for development opportunities when Marchetti approached them about the project. He said Marchetti previously worked with them on Rocketts Landing, providing marketing as managing director at commercial real estate brokerage CBRE | Richmond. 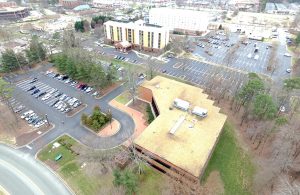 The 4-acre parcel at the southeast corner of Innslake Drive and Dominion Boulevard. (Kieran McQuilkin)

“We always looked at Innsbrook as a classic suburban office park that, as counties like Henrico begin to mature and they start running out of land, it’s such a logical progression for the single-use neighborhoods to densify and become mixed uses,” Souter said. “It was a trend that we definitely thought was going to happen.”

WAM Associates purchased the Innslake Drive parcel for $3.96 million in 2008. The existing building was constructed in 1984, according to county property records.

WVS is working with Saunders + Crouse Architects, a Virginia Beach firm that is designing the buildings.

Souter noted the project’s proximity to retail and restaurants at the nearby Innsbrook Shoppes, as well as to the neighboring Hyatt Place hotel. While that hotel and another under development provide some overnight use to the suburban office park, Souter said more uses are needed to take around-the-clock advantage of Innsbrook’s existing infrastructure, which he said is underutilized.

“These office parks have lots of parking, and Innsbrook in particular has splendid natural scenery, but it doesn’t have a life after 5 o’clock at night,” he said. “They have plenty of land, but the infrastructure including the parking really only has a daytime use.”

Innslake Place is not the first project to receive rezoning under the county’s UMU designation. Highwoods Properties received approval for a UMU district on 40 acres southwest of Cox Road and Sadler Place in 2012, though Innslake Place is the first since the creation last year of an Innsbrook overlay district that allows for UMU zoning on parcels with a minimum of 4 acres. Previously, UMU was restricted to parcels 20 acres or larger, as it continues to be outside the Innsbrook overlay.

“There’s no shortage of 1980s vintage office parks that are beginning to put residential into them all over the country,” Souter said. “It’s a way to really make them more relevant and more current these days. People want to live and work in close proximity.”

Souther and Marchetti are correct in saying that the office parks need high density residential uses to make them more efficient and livable. It’s high time to escape the isolated suburban zoning categories and better use existing residual land. Sowers and Emerson are doing something silar st Westchester in Midlothian and Blackwood is doing it adjacent to the new apartments called The Winter field adding 200 active adult units to commercial. This should be addressed elsewhere in the counties as we move into a new Era of development.

Just what Innsbrook needs. More traffic congestion with already overburdened routes of ingress and egress. Seems that where there’s a tree to be cut down and a piece of undeveloped property, there’s a developer standing reading to do so and the county continues its unbridled development without considering the value of green space. Anyone ever thought of throwing in the opportunity for a charette in such projects. or is that word not in the Planning Commission’s vocabulary? Seems these projects all get decided and approved at Planning Commission meetings with obscure notice to citizens and little to no opportunity for… Read more »

An Island of Urbanism in a Vast Suburban Sea - Bacon's Rebellion

[…] The re-development of Innsbrook, the largest office park in the Richmond metropolitan area, into a mixed-use urban district is getting closer to reality. Developer WAM Associates, led by Joe Marchetti Jr., has enlisted WVS Cos., a developer of walkable urban places such as Rocketts Landing, to develop two apartment buildings and a structured parking deck around an existing office building, reports Richmond BizSense. […]