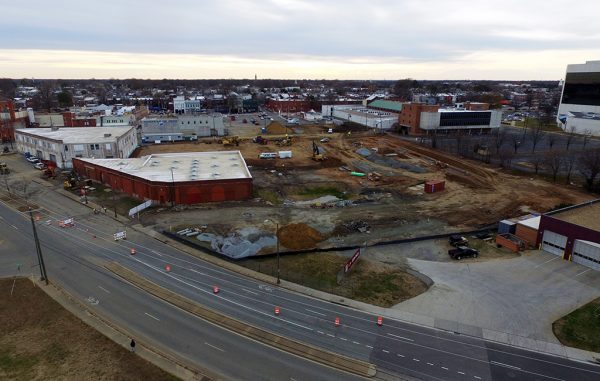 Work is underway at the Sauer Center site, as viewed from across Hermitage Road. (Kieran McQuilkin)

The future spot for a Whole Foods store isn’t the only site undergoing demolition at the planned Sauer Center development.

Site work is underway throughout the property that will house the 200,000-square-foot mixed-use development, bordered by West Broad Street and Hermitage Road to the south and east, the DMV headquarters building to the west and Richmond Fire Station No. 10 to the north.

Crews with contractor L.F. Jennings are busy grading parts of the property that are planned for surface parking, according to landscape plans submitted to the city.

Those plans show a spot within that central area that is designated for a weekend farmers’ market for Whole Foods, which will go in at the site of the recently razed Pleasants Hardware flagship store along Broad.

The plans designate those buildings as “future development.” They do not indicate a schedule or timeline for when different parts of Sauer Center would come to fruition. Development plans for those buildings have yet to be filed and would be required before building permits could be issued.

Two existing warehouses along Hermitage Road behind the company’s headquarters and spice factory are to be converted into office buildings, while the 133,000-square-foot Putney Building at 2220 W. Broad St. is planned to be renovated for additional office use. Whole Foods once considered that building for its second location. 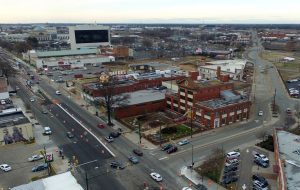 Demolition for the grocery store began this month, with crews from locally based S.B. Cox taking down the building that housed the hardware chain’s home base since 1975. The future 45,000-square-foot store will be Whole Foods’ second in the area, after its West Broad Village location in Short Pump.

The Whole Foods building, designed by Henrico-based Freeman Morgan Architects, is scheduled for completion in fall 2018, according to L.F. Jennings’ website.

All of the properties involved are Sauer-owned, except the Lee’s Famous Recipe Chicken building, which is planned to be updated with an addition. The plans show a building behind Lee’s is to be demolished.

Henrico-based E.D. Lewis & Associates designed the landscape plan for the Lee’s Chicken project, which is separate from the Sauer Center development.

Messages for Sauer Properties and L.F. Jennings seeking comment were not returned.

The activity at Sauer Center includes work to the Sauer factory and headquarters buildings. Trent Corp. is the contractor on that job, which project manager Randy McElroy said involves office renovations, upgrades to the plant’s interior, and window replacements and updates to the building’s façade. He said the work is expected to last 18 months.

In the works for years, Sauer Center represents a culmination of real estate investments the company has made dating back decades. It owns property on the other side of Hermitage Road as well, and Sauer Properties purchased the Putney Building, which once housed the Virginia Department of Taxation, in 2012 – two decades after Sauer acquired the Pleasants Hardware property in 1989. 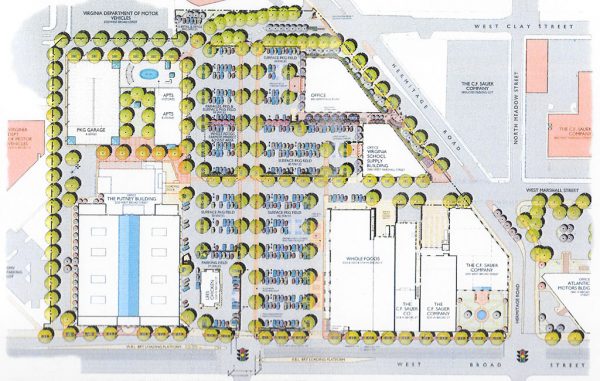 It’s difficult to measure the impact this redevelopment will have on the Broad Street corridor but it will be dramatic. Whole Foods has been long anticipated but the news of two apartment towers changes the entire dynamic along the Pulse transit route. And Lees Chicken survives! Some things should never change!

Couple of points demo started before Thanksgiving, the building behind Lee’s was the first to go and has been gone for two weeks, and it is cool to see Allison, Marshall and Clay Streets basically extending the street grid into the project. Oh and Bruce is right on Lee’s.

What is the status of this Whole Foods location? For the past two months, the property looks to be about 95% complete. I would have thought this would have opened by now. Even on their website, there is nothing about it under the “Stores in Development” section.

Lee’s has the BEST chicken in town! Other businesses could learn a lot from their business model.The store is very clean with a nice bathroom.
Their employees are are polite and friendly.The food is served quick,hot and at a fair price.