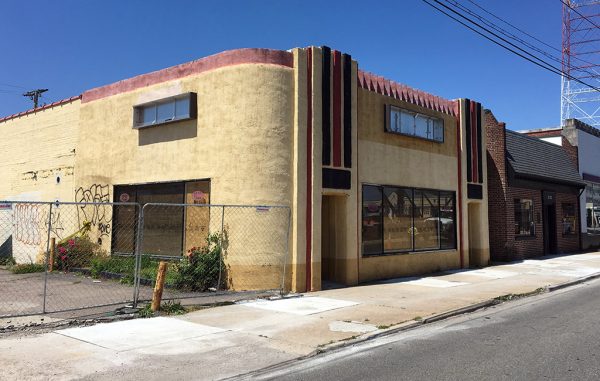 Edge Golf Academy would open in part of a vacant No. 1 Bus Tour property at 3121 W. Broad St. (Michael Schwartz)

Where Broad Street buses bound for Chinatown once docked, golfers soon will be teeing off.

A group of local investors is planning to open an indoor, simulator-powered golf training venue in part of the vacant No. 1 Bus Tour property at 3121 W. Broad St.

The Edge will offer memberships for private lessons with on-staff golf pros, as they swing in one of two TrackMan Simulators, high-tech setups that allow players to hit balls into a screen and play virtually on real-life courses, such as PGA National and Pinehurst No. 2.

“You bring your own clubs in, hit golf balls into a screen, the device picks up your ball and when it hits the screen it continues a digital ball out into the hole you’re on,” Coleman said.

The space also will have a putting green with contours and different surface types for members to sharpen their putting game.

When Coleman purchased it in 2016, he said he wasn’t sure what he’d do with the building, which sits across from the Broad Street border of Scott’s Addition. It was his background in golf that eventually fueled the idea for the academy.

Prior to getting into real estate with his company, Crossroads Development, Coleman was assistant superintendent at what’s now the Golf Club at the Highlands in Chesterfield.

“I’ve been playing golf all my life,” he said. “What brought me down here was the golf business.”

Coleman has two partners in the company, Albin Hwang and one who wishes to remain anonymous. They’re all golfers and members at various local clubs. Coleman’s home course is Willow Oaks Country Club.

The Edge will occupy 2,400 square feet in the back side of the structure. The group also will ready a 1,500-square-foot space fronting Broad Street where it hopes to attract a fast-casual restaurant tenant.

Construction will begin soon, as they hope to have the building permit in hand this week.

Johannas Design Group is the architect and they’ve yet to sign on a general contractor. Xenith Bank, which recently was acquired by Union Bank & Trust, is providing financing.

For attracting members and golf pros to staff the venue, Coleman said, a selling point is that the pros will only have to focus on training players, as opposed to the multiple responsibilities pros typically have at a golf club.

“I’ve tried to find this type of coaching experience and have never been able to find it,” Coleman said. “At the end of the day, a club pro is pretty limited in how much individual attention they can give because they get pulled in every direction.”

That will in turn allow the pros to spend more time in lessons.

“We’re going to offer a generous amount of time to each member,” he said. “We’re trying to be as close to a tour-level coaching experience as you can be.”

The Edge already has one pro on board, Patrick Hawkins, who was previously assistant pro at Willow Oaks.

Coleman said he was not ready to share membership prices for The Edge, which will cater to youth and adult players. He said the concept will look to be “a little bit higher-end.”

Coleman and his group will compete in a crowded Richmond golf market that’s also awaiting golf range/entertainment venues DriveShack in Goochland and Topgolf, which is expected to rise one mile from The Edge just over the Henrico County line.

That’s in addition to what some see as a glut of local courses, both private and public, but Coleman isn’t deterred.

“I think that golf is really strong in Richmond,” he said. “It’s only going to get stronger because I’m seeing more and more juniors get into it with programs like First Tee and the PGA Junior League.”

Coleman also coaches golf at St. Bridget School, a program that started three years ago. He said he’s seen momentum build from that as well.

“It was one of two middle schools (in the area with a golf program) at the time, and now there are six,” he said.

And Coleman said he’s glad to set up shop near the new Topgolf, which will sit just west of Scott’s Addition’s growing entertainment options.

“The entertainment aspect of Scott’s Addition is pretty alluring,” he said. “With all the different breweries, bowling alleys, shuffleboard courts – all that stuff is lending itself to it being the entertainment district of the city.”

This stretch of Broad keeps humming. Glad they are renovating this art-deco gem!