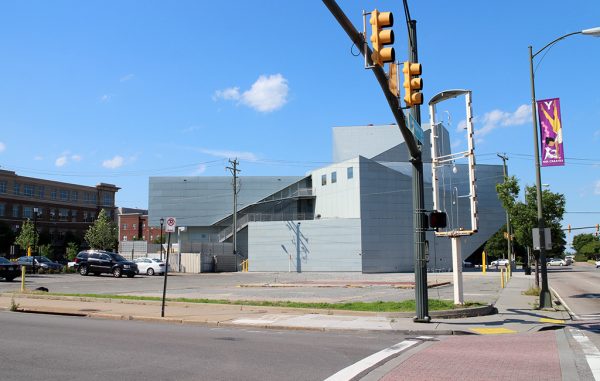 The vacant lot near the recently opened ICA sold for $3.8 million. (Mike Platania)

A year after a local convenience store and bowling alley magnate threatened to build an 18-story building to tower over VCU’s new Institute for Contemporary Art, the school’s real estate arm has dropped nearly $4 million to secure the site.

“VCU Real Estate Foundation, a separate, private entity, bought the property as a part of its mission to identify, acquire, develop, and manage strategic real estate assets for the exclusive benefit of VCU,” Porter said in an email. “The Real Estate Foundation has been interested in this property for a long time. The opportunity arose and it acted accordingly.”

Porter added that the foundation will work with the university as it undertakes the master planning process to determine the ultimate use for the property.

The parcels, which total nearly half an acre, were most recently assessed at a combined $765,000.

VCU owns much of the surrounding real estate and has spent millions to secure all the land adjacent to the ICA. The Uphoff site was the lone holdout.

Last June, Uphoff upped the ante when he announced plans to build a 209,000-square-foot tower that would house 129 apartments, a pharmacy, and a location for his bowling chain, Uptown Alley.

In February this year, he reasserted his plans to go forward with the tower, adding that VCU had continued to show interest.

The deal for the former Sunoco site marks the largest sum VCU or its real estate foundation have paid in recent years to fortify its holdings around the ICA.

A block over, VCU recently announced plans to raze the former New York Fried Chicken & Biscuit restaurant at 501 W. Broad St., where it is mulling a 13-story building. It paid $2.8 million for that property.

Further down Broad, the school dropped $3.5 million in February for the former Mansion 534 nightclub building at 534 N. Harrison St.

Just snatching up property left and right like Mr. Monopoly

And another piece of prime property leaves the tax rolls. That much more for the rest of us to pay.

That ends up being approximately 17 cents per person living in the city of Richmond.

I’d guess that the taxes generated from the design and construction of new buildings would be far greater.

And what taxes would those be?

You are also assuming all the people living in Richmond are Richmond tax payers…which they are not.

John, that wasn’t the intent. I said “per person” for that reason. If one in ten paid taxes, it’s $1.70. The point was the taxes lost will be easily recovered. I do realize the tax base declines as VCU eats up property, but I suspect the actual losses are less, as other money is invested as the university grows.