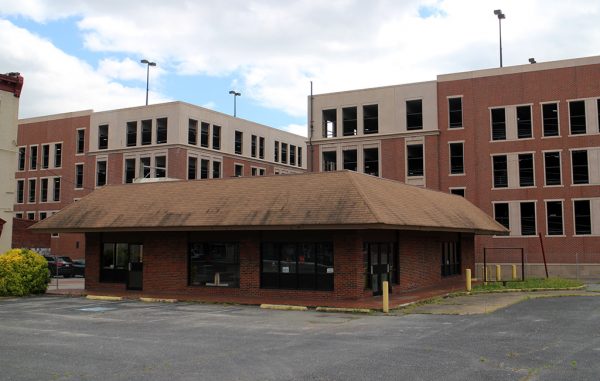 With its Institute for Contemporary Art set to open this weekend, VCU appears to be turning its attention across the street for its next development project.

The university has filed an application with the city’s Commission of Architectural Review that shows a roughly 13-story structure that would replace a former restaurant building it owns at 501 W. Broad St.

The existing building, which previously housed a New York Fried Chicken & Biscuit restaurant, would be demolished to make way for the new project.

The building’s planned use is not clear from the application, which was first reported by the Times-Dispatch. Meredith Weiss, vice president of administration, said the university is aiming to determine the building’s use by December.

VCU purchased the 0.3-acre property for $2.8 million last June, about four years after the restaurant closed.

Spokesman Michael Porter said the existing building would be razed soon for “safety and aesthetic reasons, which will allow the property to be possibly used as parking in the short term.”

Drawings for the proposal were done by Walter Parks Architects, and engineering firm Obsidian Inc. also is listed on the application.

The proposal is set to be heard at the commission’s April 24 meeting. A timeline for the demolition has not been announced. 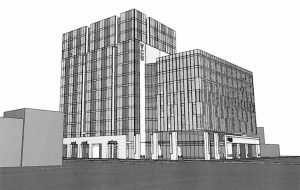 The site is two parcels down Broad Street and across Belvidere Street from the ICA, which is having a grand opening this weekend. The $41 million art institution originally was scheduled to open last fall.

Since announcing the ICA in 2014, VCU has remained busy purchasing nearby property, including the former Hess gas station at Belvidere and Broad between the ICA and former restaurant site.

Other purchases have included the former Evergreen Chinese Restaurant and a three-story apartment building that has since been razed.

One property that has thus far eluded the university is 600 W. Grace St., the former Sunoco gas station at Belvidere and Grace streets adjacent to the ICA. The corner property is owned by Steve Uphoff, owner of Uppy’s Convenience Stores and bowling alley chain Uptown Alley.

In June, Uphoff announced plans for an 18-story mixed-use tower to rise on the site. Earlier this year, he reaffirmed those plans and said VCU has continued to show interest in purchasing it.

Attempts to reach Uphoff this week were unsuccessful. A spokeswoman said Tuesday that Uphoff had no comment on the status of the project.

The university holds several other properties around town for which it has yet to announce plans. In February it paid $3.5 million for 534 N. Harrison St., the former Mansion 534 nightclub building. In 2014, it purchased the former home of Sally Bell’s Kitchen at 708 W. Grace St. for $980,000, according to city property records.

One doesn’t hire a MF architect to design a building for anything else. This one is headed for residential use. Studies have shown that kids who live on campus make higher marks and graduate at higher rates.

This one needs some serious review. I agree the old McDs (before it was NY Chicken) needs to go but this is the Old and Historic District. If you let VCU do this, then those districts mean nothing and we can just removal all protections. This building is not complaint with scope, scale or material per the district handbook design. The 13-story building is on the McDs lot and there is no 13-story buildings in this district. The least they could do is put the taller structure on the corner and the shorter building next to Henry Street. Quirk is… Read more »

Nope – build it tall(er). This is in a very urban environment and the area is changing to more density focused buildings especially along Broad Street and the BRT route.

It does look weird when literally everything else along Broad there so much shorter. However, the proposed building behind the ICA will be 18 stories if it is built, and the buildings two blocks southwest at Monroe Park are what, 17 stories or so? One thing VCU could do is set the taller sections back a bit from Broad so that the continuity of the streetscape is more consistent with that district and not so jarring.

Set back is good idea and remember west of Belvidere is not a City Old and Historic District so they can go higher. They can do that in most of Monroe Ward. There are plenty of VCU owned and other parking lots NOT in historic districts they could build on.

Yes, buildings should be flipped at a minimum. Looks like vcu is more concerned with honoring the new ICA than an historic neighborhood.

13 stories is not crazy here people. Yes nothing is taller UNTIL Foushee but right after Foushee there is a 23 story over 200 ft building that everyone would have a heart attack if they ever took down, as well we should. 13 stories is taller but not outrageous given buildings two blocks away and the design looks nicer. This building would be at the end of historic broad street section not in the middle. There is nothing wrong with what they proposed, plus do we want to keep the later twentieth century fast food architecture that is there now?… Read more »

I agree old McD can go but that historic district has standards and regulations set in place because city residents and owners wanted (and still want) it protected from encouragement and inappropriate development. That is what this is and why they need a variance to the district guidance to build the structure. The CNB tower was part of the early 20th century development of this district and is part of its charm. If you grant this to VCU then someone could use this to come before the CAR and buy up the next block, request to level it, and building… Read more »

The current building has been an eyesore for a long time. It would be nice and a great compliment to this neighborhood if VCU took care to blend this building in with the existing architecture. If they do, the aesthetics of the neighborhood will be greatly enhanced. 13 floors is fine.

I love the concept but goodness gracious the rendering is atrocious. We have a serious problem with new developments, very few bringing nothing but efficiency to the market. Being an artsy city, I wish we put a little more focus and investment in architecturally meaningful buildings.