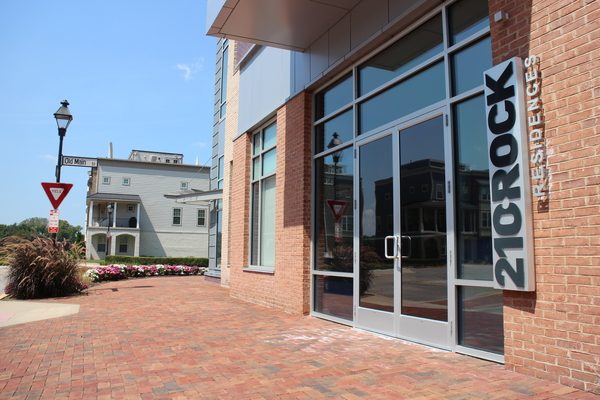 Icon Realty will move to the storefront beside the 210 Rock Residences sign. (Jonathan Spiers)

Two young and growing local real estate brokerages with offices just a few blocks from each other are making moves – one to the Southside and the other to Rocketts Landing.

Icon Realty Group is moving its Church Hill office to a larger space at 210 Rocketts Way, while Clocktower Realty Group is opening a second office in Midlothian, adding to its home base in Shockoe Bottom.

Both brokerages are aiming for November openings.

With 13 agents and more joining up, Icon broker Catina Wright said the firm has outgrown the 700-square-foot space at 417 N. 22nd St. where she started the business in 2016. The Rocketts Landing space, totaling nearly 2,200 square feet, will be able to accommodate as many as 50 agents, she said, along with individual offices and collaborative work space. 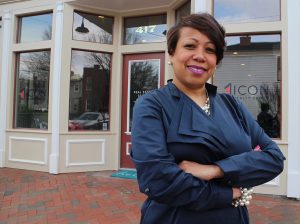 “We’re leaving Church Hill, and we hate to do that, because I absolutely love that office and I love Church Hill,” she said. “We just needed more space and weren’t able to secure that kind of space in Church Hill.”

Wright said she signed a five-year lease for the Rocketts space, which fronts Rocketts Way, the main entrance to the mixed-use development. The office’s street address will be 4833 Old Main St.

Wright said Icon has grown beyond the boutique brokerage concept she envisioned two years ago. She said it has expanded to include a commercial real estate division, and plans to add a luxury home division and property management arm.

“When I started, my vision was just for me and my little team. I think it was four or five of us,” Wright said. “A lot of agents have been coming and wanting to take part and join the team, so the vision has changed.”

Wright had been leasing the Church Hill space from area resident Charlie Field, who she said will be taking over the space for an office for his building and design business. 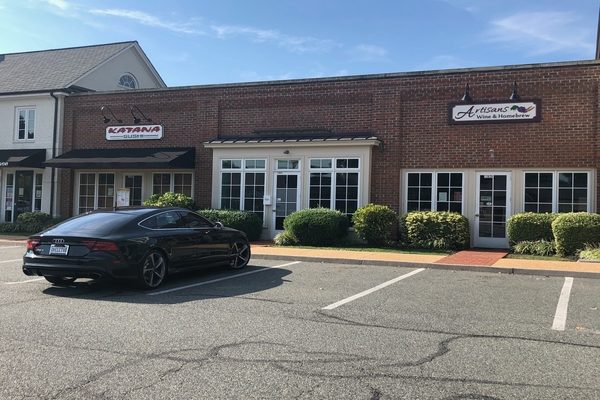 Meanwhile, Clocktower Realty, which launched last year, has leased space for a second office at 13827 Village Place Drive, two doors down from the Capital Ale House in the Midlothian Village Square shopping center on Midlothian Turnpike.

Howlett said Clocktower’s agent count has grown from 14 in May last year to just over 40 today. She said the Midlothian office will add convenience to agents who live in Chesterfield, where she said about one-third of Clocktower’s business also is based.

“Over the last year and a half since we opened Clocktower, we’ve consistently had about 30 percent of our business in Chesterfield. The City of Richmond is almost exactly the same,” Howlett said. “We’ve got a really great office downtown and wanted to be able to have another spot for our agents that live down that way and also clients that may not want to drive to the city, or this location might be more convenient.”

Howlett said Clocktower’s listings and closings have grown along with its agent count, with 259 closings this year totaling $60.1 million. Last month, the brokerage had 16 new listings, 38 closings and 31 pending transactions, and Howlett said last week was its best week yet, with 30 transactions totaling $4.1 million. 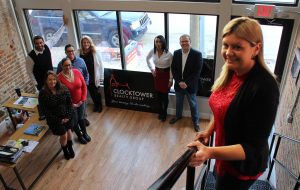 Rhonda Howlett and some of her agents in Clocktower Realty’s Shockoe Bottom office. (Jonathan Spiers)

Howlett said staff is helping to outfit and paint the space with a goal of opening by Nov. 1. About 15 agents would be based at the space, which could be used by all agents the same as the Bottom office.

While she’s committed to three years in Midlothian, Howlett said Clocktower’s long-term plan is to build a bigger office in the vicinity. She said Farrar Construction is signed on for that project, which would involve construction of a two-story brick building totaling 3,000 square feet.

Howlett said she has not selected a site for the new building, but it would be within a one-mile radius of the Midlothian space.

Clocktower and Icon join other brokerages that have moved or added offices in recent months. The Steele Group | Sotheby’s International Realty has added a second office on West Main Street in the Fan. Shaheen, Ruth, Martin & Fonville Real Estate is adding an office at Libbie and Grove, and River Fox Realty has set up shop on Forest Hill Avenue after launching earlier this year.