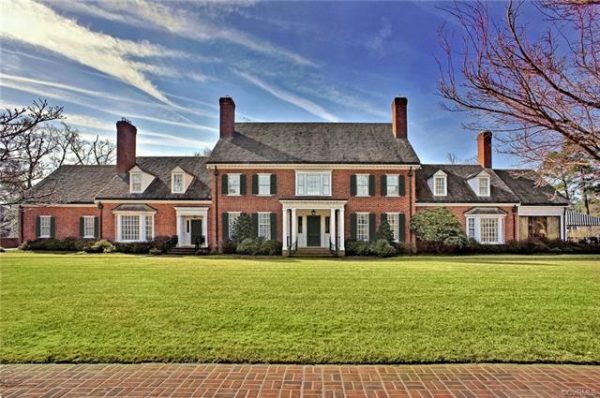 The former River Road estate of one of Richmond’s most philanthropic couples is up for grabs following a top executive’s exit from a local Fortune 500.

Clear View, the 13,600-square-foot mansion built by the late Lora and Claiborne Robins, hit the market Monday with an asking price of $3.99 million.

The two-story colonial at 5901 River Road, on 5-plus acres across from the Country Club of Virginia, was listed by Joyner Fine Properties’ Richard Bower, who is representing the sellers, Richard “Randy” Meier and Tracy Meier.

The Meiers purchased Clear View for $3.62 million in 2014 from the Virginia Historical Society, which had acquired the property at the Robinses’ bequest following Lora’s death in 2010. The property, which consists of four parcels, was valued collectively in the latest Henrico County assessment at $3.36 million.

Until last summer, Randy Meier was an executive vice president and CFO of Owens & Minor, the Mechanicsville-based health care logistics company that two years ago expanded to Riverfront Plaza. Meier, 59, left the company in July after five years in those roles. He previously served in similar roles at medical suppliers Teleflex and Advanced Medical Optics.

“It’s an ideal location and an iconic property,” Bower said. “The Robinses built it, and that just adds to the charm and appeal. They were resourceful, they had great plans, they executed it well and just made a park out of the 5 acres that they had to work with. The grounds are spectacular.” 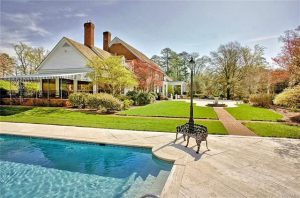 The 5-acre grounds include a pool, fountain and brick walkways.

Accentuated with brick walkways, gardens and gazebos, the landscaped property includes marble terraces, a pool, pool house, greenhouse and fountain, all enclosed within a brick wall and iron gates and fencing that surround the house.

Bower said he’s received several inquiries on the property since listing it this week. He said he’s marketing the listing in The Wall Street Journal, Washington Post and Luxury Portfolio.

“For a property like this, a lot of my marketing is one-on-one personal marketing to potential buyers that I might be aware of and/or their agents,” he said. 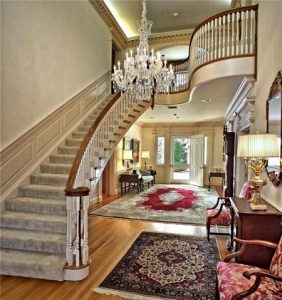 Clear View is close by the University of Richmond, where the Robins’ name is tacked onto the basketball arena, football stadium and business school, reflecting the couples’ approximately $200 million worth of donations to UR, Claiborne’s alma mater. VHS and Lewis Ginter Botanical Garden were also recipients of the couple’s generosity in their lifetime.

The Robins family fortune stems from its former pharmaceutical business, A.H. Robins Co., known for manufacturing Robitussin and Chapstick before it was sold and ultimately absorbed by industry giant Wyeth.

Clear View joins other multimillion-dollar listings on the market in Richmond. 1224 Rothesay Circle is listed at $3.49 million, reduced from its $3.75 million listing in November. The nearby Doolough Lodge mansion, listed at $2.6 million last year, has been reduced to $2.25 million. And Fairfield mansion at 211 Ross Road recently was relisted at $4.39 million, below its initial $5.95 million listing last year.