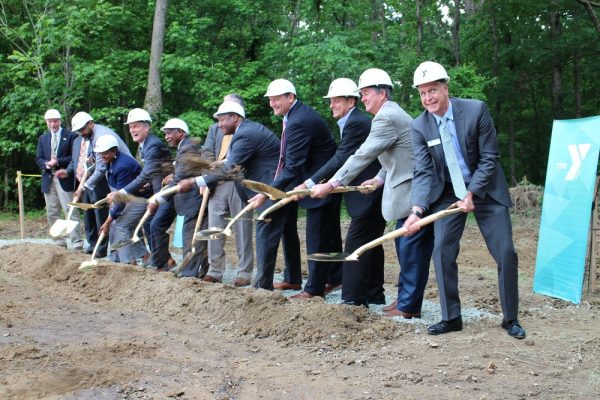 County officials joined the YMCA of Greater Richmond on Tuesday in breaking ground on their $8 million, 20,000-square-foot aquatics facility beside the Eastern Henrico Recreation Center along Laburnum Avenue. 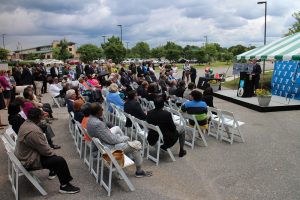 About 100 people gathered Tuesday at the site beside the Eastern Henrico Recreation Center, visible in the background.

The joint project, announced in November, involves 6 acres of county-owned land that Henrico is providing along with $8 million in county funds for the facility, which the Y will manage and operate under a 20-year lease.

The ceremony marked the start of construction on the facility, which is expected to open in early 2020 and will include an eight-lane, 25-yard competition-style pool and a warm-water instructional pool with zero-depth entry, a waterslide and a family spray area. The facility also will include locker rooms, retractable seating and parking.

Kjellstrom + Lee Construction is the contractor on the project, which was designed by Moseley Architects. Both firms are Richmond-based.

Tim Joyce, president and CEO of YMCA of Greater Richmond, was among those who addressed the crowd of about 100 people that attended the event. Joyce said the facility, and its swim classes and programs, will help to reduce the local number of drownings, which he said is the second-leading cause of death for children under 12.

“We can do something about that,” Joyce said, adding that Henrico “had the courage and the foresight to commit to making this facility a reality. Without their partnership, we would not be standing here today.” 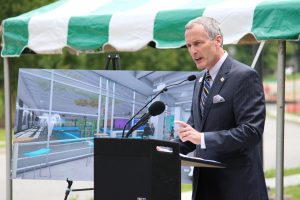 Joyce said programs will include swim lessons for children and adults, including the Y’s “Learn to Swim” program that provides free lessons for second-graders, aquatics exercise and rehab programs and special needs activities. The facility also will be able to accommodate practices and swim meets for eastern Henrico high schools.

“As a community, we’re committed to making our county drownproof,” said John Vithoulkas, Henrico’s county manager. “We are going to teach every second-grader to swim, just as we teach them to read or write.”

Vithoulkas said the project relied on the Y’s involvement to manage and operate the facility, which he said helped inspire another aquatics collaboration: NOVA Aquatics’ planned expansion at Regency Square, where the local swim club is planning a 50,000-square-foot, $18 million facility with funding assistance from Henrico’s Economic Development Authority.

Vithoulkas credited the eastern Henrico facility to county supervisor Frank Thornton, whose Brookland District includes the stretch of Laburnum Avenue that has become a hub of county-driven public facilities. 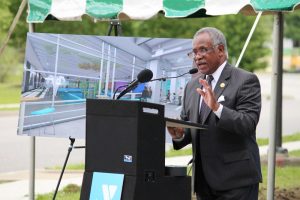 In addition to the 25,700-square-foot rec center, which opened eight years ago at 1440 N. Laburnum Ave., the corridor between Harvie and Creighton roads is home to Harvie Elementary School, the county health department’s east clinic, and the new Fairfield Area Library – a $29 million, 44,800-square-foot building taking shape across the street from the rec center.

Designed by BCWH (now Quinn Evans Architects) and Boston-based Tappé Architects, the library is being constructed by Gulf Seaboard Construction and is on track to open in October, replacing the smaller, 40-year-old library at 1001 N. Laburnum Ave.

“The aquatics center will follow next year and fit right in,” Thornton said. “Piece by piece, we are creating a place for residents and families to nurture and strengthen bodies, minds and spirits.

“I have long dreamed about having a pool in this community,” Thornton said. “We couldn’t quite make it happen when we opened the Eastern Henrico Recreation Center eight years ago; however, I am excited and grateful to say now is the time.”

The facility adds to other capital projects on Henrico’s plate. This fall, the county is aiming to start construction on replacements for Highland Springs High School and J.R. Tucker High School, each estimated to cost $80 million. Moseley Architects also is designing those schools after winning a $7.8 million contract in December.

The exterior of the new aquatics facility. (Courtesy of Henrico County)