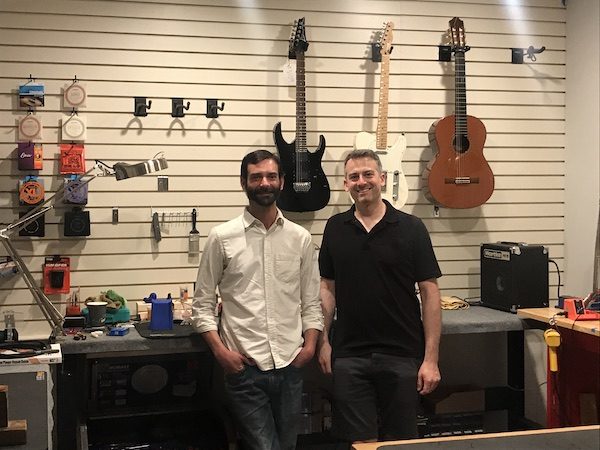 The recent closure of a longtime Carytown music store led one of its former employees and customers to start a shop of their own.

One Three Audio opened this spring at 1710 Altamont Ave. in the Sound of Music Studios building, offering guitar repair and accessories.

Behind the shop are Clarke Hedgepath and Matt Avitable. Hedgepath was formerly a manager and teacher at Guitar Works, which closed in early 2019 after 40 years in business. Avitable, whose background is in software engineering, got to know Hedgepath as a customer of Guitar Works through the years.

The two got to talking in the fall, as Avitable was brainstorming his idea for a shop that makes and sells only guitar cables.

“When we shut down Guitar Works, I had it set in my head I was going to go into something completely different,” Hedgepath said. “But music’s kind of like a calling and you can’t really get away from it. Matt brought me back to reality.”

Added Avitable: “I was just going to ask him about how to fix something on my guitar. We got to talking and hours later, we were plotting how we were going to do this business.”

One Three Audio is now primarily a repair shop for guitars, basses, mandolins, ukuleles and banjos, as well as cables and other accessories.

“We repair anything with frets on it,” Avitable said.

“(And) there’s a gap in the market with Guitar Works closed. We had so many dedicated customers who didn’t know where they were going to go,” Hedgepath said.

One Three Audio is leasing a 151-square-foot space in the Sound of Music Studios building, joining other shops in the building such as Pyramid Studios and Accoutre. Orange, a local art and decor shop, was formerly in the studio but has left.

Avitable and Hedgepath both got degrees in music and have played in bands through the years. Avitable said his most prized guitar is a 20-year-old Gibson SG, and Hedgepath said his is an old Cordoba Gipsy Kings Studio Series — a guitar built for flamenco music.

“Not that I’m better or worse than anyone, but it’s kind of like Odysseus’ bow,” Hedgepath joked. “I can play this guitar and I can make it sound great, but everybody else picks it up and it sounds (awful) even if they’re phenomenally better than me.”