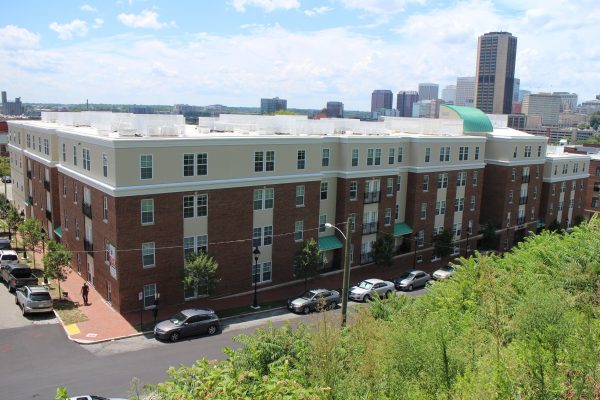 A busy local real estate group has expanded its portfolio to the Shockoe Bottom area, picking up one of the neighborhood’s newest apartment buildings in a deal that produced a $3 million return for the firm that developed it.

Led by principals Eric Phipps and Bryan Smith, SNP closed June 19 on the purchase, which comes out to $157,303 per unit. Online city property records did not reflect the transaction Monday.

The seller was Shockoe Ventures Realty LLC, an entity tied to Delaware-based Seacoast Builders, which completed the building last fall. The firm was represented by Marcus & Millichap, with Christopher Chadwick brokering the deal along with Richmond-based colleague Martin Mooradian.

Phipps said SNP was drawn to the property for its location and on-site structured parking – an amenity included in the firm’s ground-up developments, such as The Penny in Jackson Ward and The Summit in Scott’s Addition. The firm’s portfolio also includes its “City Center”-branded properties in a block of Monroe Ward that it purchased in 2017.

Of Vida East, Phipps said, “It was an opportunity for us to acquire another quality asset with structured parking, in an area like the Bottom that continues to get better every day, and there’s a need for parking there.”

Phipps said Vida East was 75 percent leased at the time the transaction closed and is projected to reach 95-percent occupancy by the end of August.

Seacoast developed the property at a cost of $25 million after purchasing the then-vacant 1-acre site for just over $2 million in 2016. KBS was the contractor, and Dodson Property Management has handled leasing and management. Phipps said Dodson would stay on as property manager.

Chadwick, who is based in Marcus & Millichap’s D.C. office, said the property was listed the same day the 200,000-square-foot building received its certificate of occupancy last November.

“I think they saw an opportunity to capitalize on the market and where it was,” Chadwick said of Seacoast. “It didn’t necessarily fit into their portfolio. They would have kept it had we not been able to achieve the sale, but being out of market, they would rather act as a merchant developer than a long-term holder and owner.”

Chadwick said the listing drew eight or nine offers but was challenging due to the timing with leases getting going. By the time the listing’s 45-day marketing period ended in late January, Chadwick said about a dozen units had been leased.

“The biggest challenge for us in the front end of the listing was the uncertainty of lease-up,” Chadwick said. “The market definitely wanted to see how lease-up went, and unfortunately, starting a lease-up in November is not the best time of year, so initially things went slower than we would have liked.”

“It was subject to a VHDA loan assumption, so we had some time that it takes to vet it, and we had to convert the construction loan to a permanent (loan),” he said.

The property is located in an Opportunity Zone, though both Chadwick and Phipps said the designation did not factor into the deal. Such zones provide a federal tax benefit to investors of properties in designated low-income census tracts, enabling real estate developers to pool together funds from investors as an alternative way to complement traditional financing.

Phipps said no changes are planned for the property or its rental rates, as he said value would be added through increased occupancy. He said he doesn’t anticipate changing the “Vida East” name. Unit sizes range from about 350 square feet for a studio apartment to nearly 1,200 square feet for a two-bedroom floor plan. Monthly rents average $2.10 per square foot, Chadwick said, putting the range for those units between about $735 to $2,500. Amenities include a saltwater pool, dog park and rooftop deck with views of the downtown skyline.

With Vida East, Phipps said SNP’s apartment count is slated to reach 600 once The Summit is completed. He said The Penny in Jackson Ward, totaling 167 units, started moving in its first residents this month and is 35 percent leased.

Phipps said he doesn’t anticipate further acquisitions in Shockoe Bottom, noting the purchase adds the neighborhood to SNP’s footprint that includes holdings across a wide swath of the city.

“I think that that’s enough units for us in the Bottom,” Phipps said. “It’s a good fit for our portfolio, because it gives us one in the Bottom, one in Jackson Ward, one in Monroe Ward and one in Scott’s Addition, so it’s a nice little portfolio.”

I am glad to see this building has picked up tenants, its location at the base of Jefferson Park is attractive. Watching the developer demolish the concrete at the western end of the building (probably because it failed the stress test?) was painful. hopefully the second attempt at pouring in that part of the complex was successful, and Vida East manages to stand for a long time.