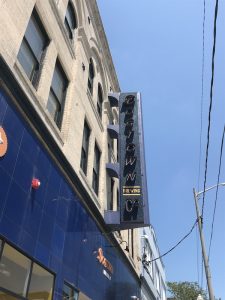 Dogtown Brewing Co. opened on Hull St. after about 18 months of renovations. (Photos by Mike Platania)

An old Thalhimers department store building in Old Town Manchester has officially been reborn as the city’s newest brewery.

Dogtown Brewing Co. opened over the weekend at 1209 Hull St., following nearly two years of renovations that included adding a dozen apartments on the upper levels of the three-story structure.

Behind Dogtown are local married couple and developers Michael Hild and Laura Dyer Hild, who own dozens of properties in Southside, and also operate The Butterbean Market & Cafe and Hot Diggity Donuts, both of which are within earshot of Dogtown.

The brewery’s opening comes as Michael Hild is embroiled in the bankruptcy of his now-defunct mortgage company, Live Well Financial.

Dogtown opened with eight beers on tap and a full food menu. A barleywine, pale ale, kolsch, oyster stout and brown ale are among its debut beers, which range from $5 to $9. The brewery also is offering four packs of 16-ounce cans of some of its beer, as well as crowlers. 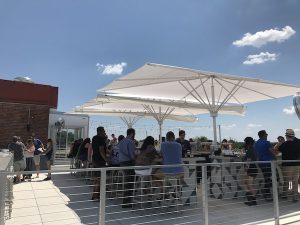 The food menu at Dogtown includes oysters, pupusas, burgers, pretzels, salads and sausages. In addition to a downstairs beer hall, the brewery has a rooftop bar and mezzanine area with a game room.

Dogtown is the third brewery in Manchester, joining Legend Brewing, which recently celebrated its 25th year in business, and Basic City Beer Co.

Last year the Hilds also announced their intention to open Manastoh Brewing at 1128 Hull St., but no plans have been filed for it with the city.

So you are telling me that none of the money missing from the Live Well debacle was used for this?

I would assume even if he used salary for this, that doesn’t trump the primary note holder???

How are these assets not right in the middle of the crosshairs of the bankruptcy trustees?

Fred Squire –Looks like the system allows people to skim the cream of one business, run it into the ground, and parachute into another business. Any bankruptcy lawyers want to weight in on this?