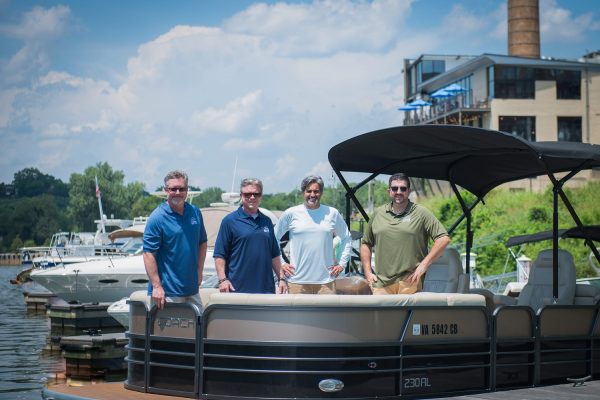 They bought the business from Bryan Courtney, who purchased it for $1 in August 2013 and who continues to operate another branch under the same brand out of Williamsburg. The club originally was launched as the Mariner’s Club in 2009 by then-owner Tory Wiles, who joined under the Carefree name in summer 2012, before handing off the keys to Courtney a year later.

The new ownership group declined to release the exact price paid for the boat club in this latest sale, but said it was nothing like Courtney’s previous deal.

“I can tell you we did not pay a dollar,” said Broggie, who, along with being an equal part-investor in the club, manages the fleet of six boats and is purchasing more to expand to a planned 10 boats for next year. 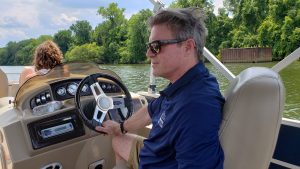 Pat Hull steering one of the Carefree Boat Club’s boats down the James River. (Josh Cozine)

“It’s kind of misleading,” Hull said about the previous $1 acquisition of the club. “Usually when someone pays $1, they take on a load of debt.”

“I can tell you that when (Courtney) bought the club, it was in complete disarray and shambles,” Palumbo said. “We worked out an equitable acquisition price and plan. It was fair to everyone.”

Palumbo, Hull, Broggie and Bawa know each other and have worked together as mentors at Lighthouse Labs, a local startup incubator. They also have worked with each other in other two person business partnerships, such as a recently launched nonprofit incubator from Hull and Palumbo.

Carefree Boat Club operates 77 clubs worldwide, all of which are independently licensed and operated. It operates as a network whereby any member at any club can reserve boats from any other club up to five times a year while receiving unlimited reservations to boats from their home club wherever they choose to sign up. It has clubs in the U.S, parts of Canada and one in the British Virgin Islands. Its other nearby locations include Virginia Beach and Hampton.

The new ownership group at Rocketts Landing comes in with plans to purchase more boats and to add more perks to membership, such as classes, new equipment and partnerships with local businesses. 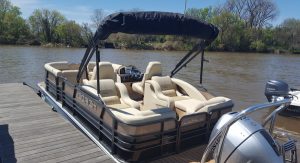 The club has six boats and 30 members, Palumbo said. Each boat that is not in for repairs offers both morning and afternoon four-hour blocks — giving a total of 12 availabilities a day. Members can also keep the boat a full day if no one else has a reservation.

Classes offered by the club under new ownership will include boating safety courses with trained captains that can get people their boater safety certification, and wakeboarding, skiing and tubing classes.

The club also now will offer direct transportation to the docks by golf cart and dockhands to load and unload the boats for members, as well as gift certificates to dock at adjacent restaurants such as Conch Republic and The Boathouse.

Palumbo said he’d been looking at getting into the Carefree Boat Club for some time after doing some consulting for Carefree’s corporate office and the Rocketts Landing location was suggested. Since then, he said he and his three partners also have been approved to operate clubs in Deltaville and along Lake Anna at the Lake Anna Yacht Club, where they are currently bringing in boats. 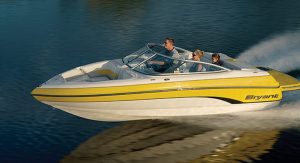 The 21′ Bryant open-bow, which can fit up to 9 people. (Carefree Boat Club)

“All Jeff did was call us and ask if we wanted to be a part of this, and we all agreed,” Hull said. “It took less than 24 hours and he had his team.”

Members of any of the clubs owned by the four will have unlimited access to boats in their other locations as well as a club in Stafford, Virginia, which the Rocketts group may look to take control of in the future.

That cost, the group said, is cheaper than boat ownership. 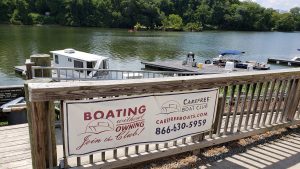 The Rocketts Landing’s Carefree Boat Club operates out of docks on the James River. Reservations can be made online. (Josh Cozine)

“If I were to give (away a) boat for zero dollars right now, it would cost more than the cost of the club membership just to own and maintain it,” Palumbo said. He added that they also offer boat trade-ins in exchange for membership for those boat owners who decide it’s not worth the trouble.

Along with maintenance, slip spaces at the marina are leased annually from anywhere between $1,800 and $4,500 depending on the size of the boat.

“Owning a boat in general is pretty low-value, except when you’re actually boating; that’s the high-value time,” Hull said. “When you think about boat ownership, you have to think about maintaining it and cleaning it constantly, preparing for outings and everything else.

“With this club you can show up, the boat is ready to go, already cleaned. Then you go out, come back, pull up and you’re on your way home.”

Pretty funny article here! I am glad I could bring such an amazing experience to Richmond and Rocketts Landing. After 4 years I was able to get membership to over 75 members for the year, State o the art reservations system, obtain No Wake zones for the area, help create gas solution for James River Boaters, and train over 250 for boating classes, and partnerships with the local restaurants. Sad that Carefree boatclub could not continue the success and had to sell off the club again which seems to be due to a large drop in memberships. I heard there… Read more »

Tory – we had a fantastic boating experience when you led the club. Really enjoyed it. Quality and customer service dropped immediately after you left. We did not renew. You tee’d up a great club. Hope these guys can provide the level of service you had.

Thanks Stephen! Always enjoyed you and family/friends out on the water!

Mr. Wiles, Thank you for the vote of confidence! I appreciate your contribution many years ago, We all benefit from it today. I am one of the new owners. I am proud to share that we are VERY customer-focused! We want our members to have an exceptional experience in every facet of their Carefree Club Membership. We have added unlimited use at Stafford, VA (1 hour north) and unlimited use at Lake Anna. We have ordered new boats and we have already added many new enhancements for members. Including boater safety classes open to the public free of charge, wakeboarding… Read more »

Will Meyer
Reply to  Jeff Palumbo