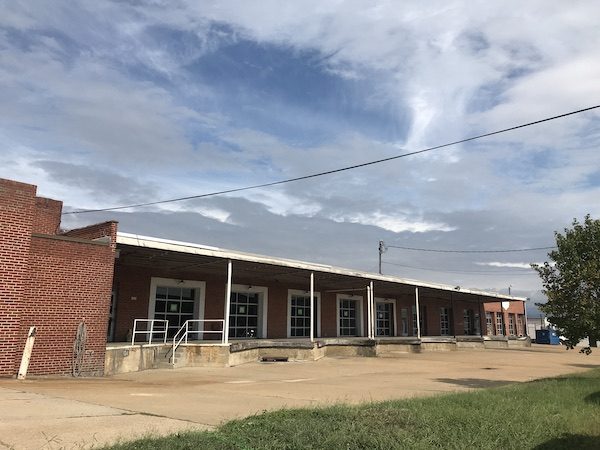 The former Relay Foods warehouse is set to be demolished to make way for a 5-story mixed-use building. (Mike Platania)

Correction: An earlier version of this story incorrectly reported Greystar is under contract to purchase the Roseneath site. The company is in early-stage discussions for a deal on the property, but it is not yet technically under contract.

An out-of-town developer is in the early stages of a plan to add hundreds more apartments to the Scott’s Addition landscape.

South Carolina-based Greystar is in talks to purchase the former Relay Foods warehouse at 1601 Roseneath Road for an undisclosed sum, according to multiple sources familiar with the deal.

City records show the company, which also is working on the Everleigh Apartments senior housing development in Short Pump, would construct 350 apartments and about 10,000 square feet of retail space on the site.

Sources said the new structure would rise five stories and have a parking deck with about 350 spaces.

The existing 103,000-square-foot building sits on 2.4 acres, taking up the better part of a city block bounded by Roseneath Road, MacTavish Avenue, and West Moore and Norfolk streets.

Home decor shop Dana Gibson Inc. and HVAC supplier Gemaire Distributors are currently tenants in the property, and now-defunct online grocer Relay Foods once had its warehouse there before it closed in early 2017.

Greystar did not respond to requests for comment by press time. Per its website, Greystar has completed over 100 projects costing more than $13 billion cumulatively throughout the U.S., Europe and Mexico.

The building is currently owned by 1601 Roseneath LLC, an entity tied to Andrew R. Little of Midlothian, and is zoned B-7 Mixed Business District. A city assessment most recently valued the building at $2.7 million.

Greystar’s project would be the second apartment building with over 300 units to go vertical in Scott’s Addition, joining Louis Salomonsky and David White’s Scott’s View towers at 1400 Roseneath Road, which are nearing completion.

I hope it is not a bland and boring as those Scott’s View towers. Slabs of grey concrete with red and black stripes. The exterior colors match but the detail from the rendering is not in the building (it rarely is). 5 years and Scotts Addition will be as unique and special as the area around 395 and Braddock Road in Alexandria.