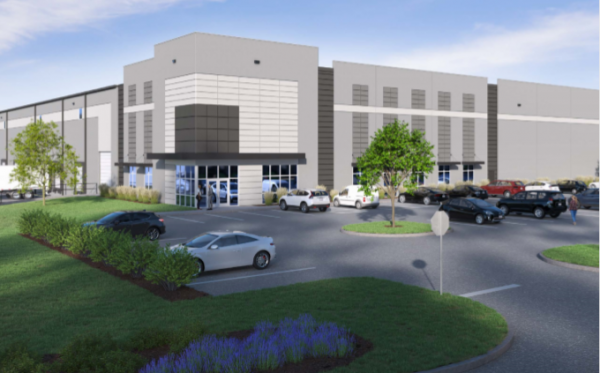 With acreage in hand following a seven-figure deal, an Indiana-based developer has plans for a sizable development along one of Chesterfield’s highly desired industrial corridors.

Scannell Properties last month purchased a 58-acre site at 1410 Willis Road from an entity tied to Virginia Beach-based Armada Hoffler. The property most recently was assessed by the county for about $1.93 million.

The property is part of the 177 acres Armada Hoffler picked up in January 2018 for $2.5 million. It built a 220,000-square-foot warehouse on part of that assemblage before selling the building and an extra 55 acres to an entity tied to PepsiCo. for about $26 million earlier this year.

Scannell, with its portion of the property, will look to build Willis Commerce Center, consisting of a 405,000-square-foot distribution center to rise on about 35 of the 58 acres. The center would sit between the PepsiCo facility at 1608 Willis Road and the General Electric manufacturing plant at 1200 Willis Road, according to a Colliers International marketing flier.

Willis Commerce Center will include 48 high dock doors, seven-inch-thick reinforced concrete floors, parking for 286 employees and 110 trucks, and 32-foot-high ceilings, according to the flier. 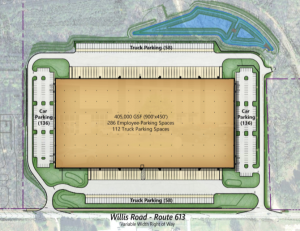 A site plan of the facility. Click to enlarge.

The project is expected to be ready for occupancy by the third quarter of 2020. It will be Scannell’s first project in Virginia. The company could not be reached for comment.

No tenants have been announced for the space.

With a regional office in Alexandria, Scannell is a privately owned development company that focuses on mostly build-to-suit and spec industrial and office projects. The company has completed dozens of projects in the Carolinas, Georgia, Connecticut, Ohio, New York, Indiana, Texas, Wisconsin, Colorado, Nevada and California.

The firm’s move into Chesterfield comes as distribution and warehousing demand grows along the Interstate 95 corridor in the county.

Online car seller Carvana filed plans with the county for a $40 million, 9,000-vehicle inspection and processing center on a 183-acre site at 13504-15100 Woods Edge Road, along the east side of I-95 north of Ruffin Mill Road.

Elsewhere in the county, Michigan-based vacuum cleaner maker Bissell Inc. acquired about 40 acres at 1200 Battery Brooke Parkway in the James River Industrial Center, a parcel that once was slated to be part of the 650-acre Shandong Tranlin Paper Co. factory. Bissell is planning a 611,500-square-foot industrial complex to be built in phases.