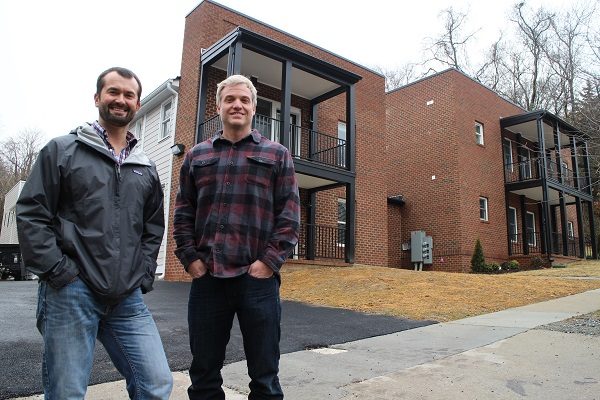 Matt Jarreau, left, and Casey White in front of the apartments they upgraded with John Humphries (not pictured). (Photos by Jonathan Spiers)

A revival of a once-overlooked stretch of street in the shadow of Richmond’s Libby Hill neighborhood is balancing out with the completion of a seven-figure apartment rehab.

Local developers John Humphries, Matt Jarreau and Casey White have wrapped up their upgrade of a decades-old apartment building at 3005 E. Franklin St., just east and down the hill from Libby Hill Park in an area known as Sugar Bottom.

The $1.3 million project, which converted and expanded eight existing units into a dozen upscale apartments, adds to six new single-family homes that have been built across the street – three by the group’s RVA Sugar LLC, the other three by developer Zach Kennedy. 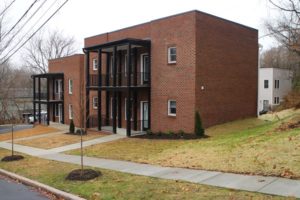 The apartments as viewed from uphill along Franklin Street.

By mid-December, four of the apartments had been leased and move-ins were underway, including a senior couple relocating from North Carolina, Jarreau said.

Jarreau, a real estate agent active in the area, said monthly rents for the apartments were increased by about $200 each, to $1,150 for the eight one-bedroom units and $1,450 for four two-bedrooms, because of the area’s proximity to Libby Hill Park, Church Hill and other neighborhoods. He said market demand also factored into the rents for the units, which range in size from 540 to 1,015 square feet.

“Being that we’re right off this south-of-Broad brick, it feels like it’s spilling down into these little pockets and it’s all filled in,” Jarreau said. 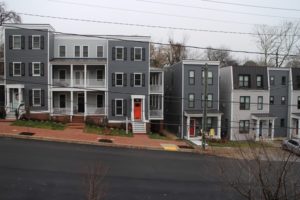 The new homes across the street.

Tucked between Libby Hill and Chimborazo Park, Sugar Bottom is known as one of Richmond’s red-light districts during the Civil War era. The new homes on the north side of Franklin Street are also associated with other names, included in a city assessment area called Tobacco Row/Undertakers Row.

Quiet for decades, the area popped up on developers’ radars in 2015, when Kennedy and RVA Sugar started purchasing properties there. Kennedy bought his three lots in a multiparcel sale totaling $100,000, while RVA Sugar purchased its three for $45,000. In all, the six homes’ sales totaled upwards of $2.6 million.

RVA Sugar purchased the apartment building the same year for $206,000 and put $1.3 million into the upgrades – slightly over the group’s planned budget, Jarreau said. The existing 9,200-square-foot building was renovated and expanded, with additional structures forming a horseshoe-shaped, HardiePlank-sided footprint. 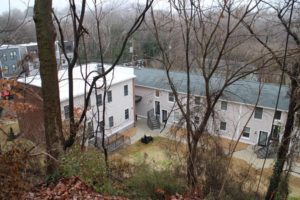 A view from Libby Terrace shows a central courtyard enclosed between the apartments and hillside.

White, who with Humphries does business as Kiwi Development, said the construction required adjustments because initial plans would have cut into the hillside, below Libby Terrace. The resulting layout includes room for eight off-street parking spaces. The project’s schedule lasted about 18 months.

All of the first-floor units include polished concrete floors, while the second-level units have vinyl flooring. All units include granite-countertop kitchens with stainless steel appliances and tiled backsplashes. The four brick-sided units facing Franklin Street each include a porch or balcony.

The apartments were designed by Todd Dykshorn with Architecture Design Office, and White and Humphries oversaw construction. Humphries is the owner of Greenleaf Builders and White is a field manager with Centex Homes. 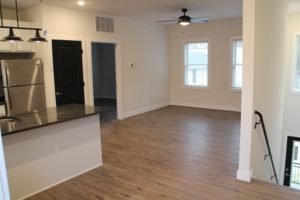 The group worked with Cary Ayers with Atlantic Union Bank to finance the project, and Real Property Management is managing and leasing the units.

Meanwhile, across the street, two parcels at the bottom of the hill that were once planned for another house were sold off last April. Kennedy’s Cheneys Creek LLC sold that land, totaling one-tenth of an acre, for $340,000 to Chimx LLC, an entity tied to real estate firm The Wilton Cos.

Wilton, which owns the nearby Armitage Building along Williamsburg Avenue, used the same LLC when it picked up several other undeveloped acres nearby in recent years. The Henrico-based firm purchased the Armitage Building in 2016 and plans to eventually rehab it.

Congratulations to this trio for delivery of another fine product!

nice. looks like a real quality project. thanks for investing in Richmond’s future.

These look nice?!? Monotone brick blocks with zero character? They are hideous.

I agree… what’s with the tiny windows and entire walls with no windows? They look like cell blocks. Perhaps they had to leave them like this to get tax credits.

We were partially constrained by the CAR on this project so some of the exterior features we didn’t have total control over. Also this picture was taken some weeks ago without the trim underneath of the roof line once that was added it does look a bit better.

New homes have much more style than the rental units but they are all better Ashley that was there before hand. Maybe Matt can work on 31st Street. That one block has some great old row homes that need help and some vacant lots and CMU apartments that need to go.

Michael which block on N 31st are you referencing?

The article states these are “upscale”…maybe a bit of a stretch- What is true- they are certainly an improvement over what was there. I have to agree with some of the others here- the buildings are unattractive at best- a real missed opportunity. When are the dilapidated and condemned looking rowhouses around the corner going to be addressed?