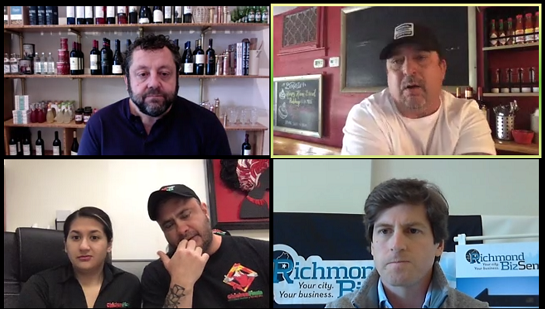 The first BizSense Assembly focused on how local restaurateurs are dealing with the pandemic. (Screenshot)

Local restaurants were among the first to feel the economic reverberations of the coronavirus pandemic as it came ashore in Richmond in recent weeks. Wednesday morning, several restaurant owners gave an update on how they’re faring.

The three restaurant groups now offer delivery and takeout, but each took different paths to get there.

Giavos shuttered all of his restaurants except for The Galley and Stella’s, and moved supplies from the closed restaurants to the open ones. Lyons initially shut down Lunch and Supper, and Brunch, before reopening them for takeout. Vega and Ortiz opened a fifth Chicken Fiesta in Midlothian just weeks before the outbreak took hold and has kept the other four locations open.

The operators’ common theme was frustration from not knowing how long things will continue like this.

“The question that’s gonna decide how businesses sustain themselves, especially restaurants because we’ve been hit harder probably than any industry, is ‘when? When does this end?’” Giavos said.

Meanwhile, their eateries aren’t making nearly the kind of money they’re used to. Lyons and Giavos both launched GoFundMe campaigns for their staff. Giavos said he’s written $21,000 of personal checks to laid-off employees whose families can’t file for unemployment.

“The way we’re working right now is for the employees … I don’t think nobody can make money in this economy at this point,” Vega said.

Giavos said he didn’t pay last month’s rent, taxes or other bills, and said his concern is what will happen when vendors and landlords come asking for payment.

“The (landlords) that ask me for rent and I don’t pay them, what are they gonna do? Throw me out in three months? To be honest with you I don’t even care anymore, because if that’s how they’re gonna work for me, why would I want to be partners with them anyway?” Giavos said.

The group said this is the most difficult headwind they’ve faced as owners, harder than even their startup days.

“I can speak for most people that this is the worst thing we’ve ever been through,” Lyons said. “For now, not knowing the future is the hardest thing you could possibly put on any owner of any business.”

The panel said they’re watching and learning how they might be helped by the stimulus package passed by the federal government. Lyons said there’s little clarity about the details of it even after sitting in on webinars about it.

“The big question is ‘when? When will it be released, and when will we get that money? It’s all so grey and so new that every day’s like a new day,’” Lyons said.

Giavos said he was heading to meet with this accountant about the stimulus package after the panel’s conclusion.

Despite the financial fallout, all the operators acknowledged the impermanence of the crisis and the need to keep perspective.

“I told my employees, at least we’re still breathing,” Vega said. “We’re healthy at this point and also we have a job. We have a lot of friends and people around that don’t have a job. We’re blessed, definitely we’re blessed.”

Asked what Richmonders can do to help out beyond patronizing local restaurants, Giavos said, “Pay it forward.”

“Anyone you can help right now, they’ll appreciate it. You’ll make it back threefold in the future,” he said.

“We’ll survive, but everybody needs to survive or there’s nothing worth surviving for,” he said.

BizSense Assembly will be held every Wednesday at 11 a.m. for the foreseeable future, each week with a focus on a different industry and with a new slate of panelists. Tickets are now on sale for the next episode, which will focus on Richmond’s hotels. The price is $10 to view, with half the proceeds going to Feed More.

The issue of rents will likely come down to the strength of the lenders. If lenders will work with landlords, in turn the landlord can work with his tenant restaurants. Fortunately, banks have never been stronger than today. Tossing aside loans with strong histories will not benefit anyone, including bank shares. Forego and extend. Keep businesses in place.

Bruce;
What do you think about landlords , how should they handle renters who can’t pay?

Well right now evictions are out of the question, but overall it may depend on how the property is held. If owned outright then it is completely up to the landlord, but if a loan is involved it once again depends on the lender. Any allowance given by the lender can and should be passed on to the renter. Depending on the situation forgiveness, deferment, and readjustment should all be on the table, but according to the law evictions are out for now.

A thought that has crossed my mind as well! What benefit do landlords (and thus banks) get from kicking out previously good tenants? It’s not like they are going to be able to replace them right now. Loan forbearance seems the logical approach.

Agreed, and for both especially commercial real estate, there is going to be a huge amount of empty spaces
So many people will be working from home now that they’ve been doing it for weeks. It’s going to save companies a lot of money, but commercial spaces are going to have to be rethought
How much would you give for a detached shed converted into an office right now?