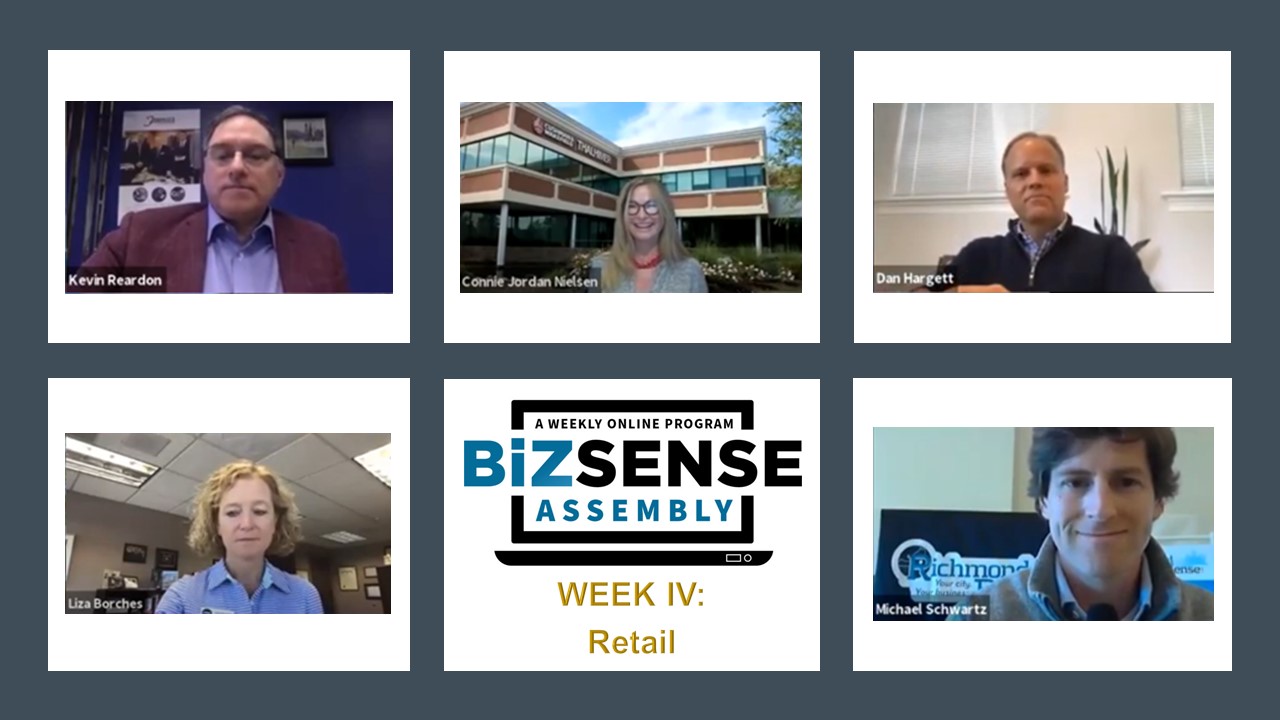 This week’s panel featured local retailers from a variety of industries. (BizSense graphic)

While the ground is uneven, and there’s likely a rocky road still ahead, a panel of speakers representing the local retail sector struck an optimistic tone on Wednesday.

A broker, a car dealer, a tailored suit seller and a landlord/developer made up Wednesday’s installment of BizSense Assembly, a weekly online panel discussion series held by Richmond BizSense.

Panelists struck an optimistic tone about the industry’s ability to get through the crisis, but noted the future is up in the air.

Kevin Reardon, co-owner of Franco’s Fine Clothier, said the longtime men’s clothing store’s locations in Lakeside and Short Pump remain open, though occupancy is kept to a minimum to comply with the governor’s orders.

Reardon said the company is doing just 10 percent of the business it was doing at the start of the year, but it has kept its employees on payroll and learned to be flexible in how it provides its goods and services.

“We’ve done a little business, people who have needed things and come in,” Reardon said. “We’ve certainly, like everyone else, put ourselves out there to deliver, ship, curbside pickup, whatever we need to do to help our customers out. It’s a totally different world.”

Liza Borches, CEO of Carter Myers Automotive, said a similar process of relearning how to serve customers given the unusual circumstances is taking place at her 15 dealerships across the state.

“When this all began and we were trying to figure out how to change our processes, I said, ‘We’ve got to think outside the box.’ And the next week I said, ‘We have to throw the box out the window’ because there was no box for this,” Borches said.

The pandemic has ushered in a host of solutions, Borches said. Customers can now do solo test drives, and digital signing of documents has become more frequent. Where a face-to-face meeting between customer and service advisors is required, the company has put up plexiglass barriers.

“Customers are appreciating it. They’re seeing all the steps we’re taking, which has actually, I think, in the last 10 days increased our business,” Borches said, adding that Saturday was the busiest Saturday the company has had in six weeks.

But while Richmond’s retail industry appears to have found a way to muddle through the day-to-day effects of the pandemic, it remains to be seen how the sector comes out on the other side of the crisis.

How to handle rent payments is a concern across industries, and retailers are no different as they shutter temporarily or reduce operations due to the pandemic. Dan Hargett, a principal at The Rebkee Co., has some experience on the landlord side of that problem, as Rebkee is a major local retail developer and property owner with holdings such as Regency Square and Virginia Center Commons.

Hargett said the experience is different for each tenant, with big national retailers and small businesses having different resources and capabilities to make rent. Generally, rent isn’t being paid like it was prior to the pandemic, he said, adding that the extraordinary circumstances have called for and been answered by accommodation.

“At the end of the day, rent has been paid on a limited basis and we put a process in place to work with each tenant individually,” Hargett said. “Our local lending relationships have been fantastic and they’ve really worked with us locally to weather this storm.”

Connie Jordan Nielsen, a senior vice president and veteran retail broker for Thalhimer, said clients are inquiring about how the pandemic will affect future rental rates. She said it depends on how things play out.

“Unless construction costs come down, there’s just no way you’re going to see a reduction in rental rates for new construction projects because they’re tied together,” she said.

“Unless occupancy rates really decline, you’re not going to see a change in rental rates across the board on existing products. Only time is going to tell.”

“Regency and Virginia Center are long-term projects and they are fantastic pieces of real estate that need a new format. We’ve been working through that format over the last several years at Regency and are just getting started at Virginia Center. So I don’t see this impacting that,” Hargett said. 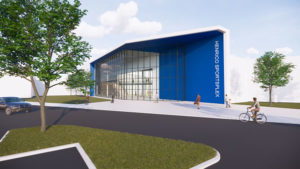 A rendering of the new arena planned for the current site at Virginia Center Commons. (Courtesy Henrico County)

Panelists agreed it’s hard to predict the downturn’s future because it differs substantially from other downturns.

“It wasn’t a single event, like a 9/11, and it wasn’t a financial meltdown like what happened in 2008. Starting as a health crisis created a whole different level of anxieties,” Nielsen said.

Unemployment after the pandemic passes will be a key indicator of retail’s future, Nielsen said. Will people who lost their jobs get rehired quickly after the virus abates, or will many workers remain unemployed for a long time?

“That’s the biggest question we want to ask ourselves as far as the retail business goes,” she said.

BizSense Assembly is held every Wednesday at 11 a.m., each week with a focus on a different industry and with a new slate of panelists. Stay tuned for details on the next episode. Half of proceeds from ticket sales go to Feed More.

Check out our previous Assemblies: