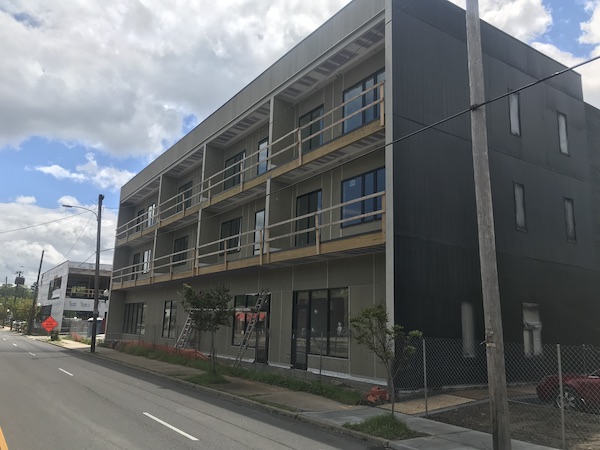 The two buildings on the project will be split by an outdoor plaza. (Photos by Mike Platania) 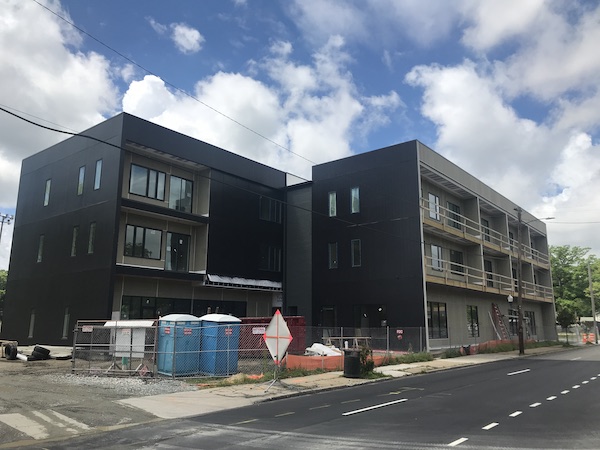 The developers are starting to market the 16 apartments for lease.

A brewery-anchored project on the Southside is eyeing a summer finish line, the same time many Richmonders are hopeful for an ending of social distancing guidelines.

Charles Bice and Birck Turnbull’s development at 4910-30 Forest Hill Ave. is expected to be completed in July as work continues on the two-building mixed-use project, whose marquee tenant is The Veil Brewing Co. 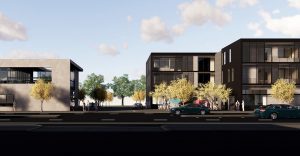 “Obviously, like everybody, we’ve been affected (by the pandemic) somewhat but it has in no way derailed construction,” Bice said. “Construction remains on schedule with maybe a minor delay. … The apartments will come online in July.”

The apartments will be called Hill Standard, Bice said, named for the Forest and Westover Hills neighborhoods and how the property formerly housed a Standard Drug Co.

Of the 16 market-rate apartments, 14 will be one-bedroom units and two will be two bedrooms, which Bice said Thalhimer will manage.

The Veil, which also opened its Funkhaust Cafe at 2256 Dabney Road in late 2019 as a barrel-aged beer-tasting room, is scheduled to open its Southside location this summer, Bice said. 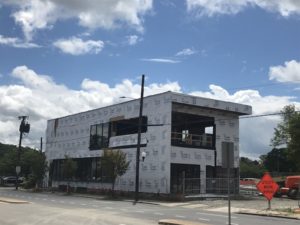 The Veil’s Southside taproom is expected to open this summer. (Mike Platania)

“The Veil, which has its own building, is proceeding on a parallel schedule with the apartments more or less,” he said.

Bice said the tenants’ shell spaces were handed over to them to begin buildout right when the stay-at-home restrictions went into effect, so work on those spaces has been delayed.

“Because all of those businesses are food- or fitness-related, they’re all businesses that would not be allowed to be open now. So the tenant improvements of those has kind of been on pause, awaiting the stay-at-home restrictions to conclude,” Bice said. “It’ll pick up when (the restrictions) are over.”

Bice, Turnbull and The Veil are also working on The Belleville, a food hall at 1509 Belleville St. in Scott’s Addition. Demolition and initial structural work was just getting started when the pandemic hit, Bice said, and that project’s been delayed a bit.

D.C.-based Restaurant Neighborhood Group, which will be a tenant at The Belleville, is handling finding other vendors for the food hall. Beyond The Veil and NRG, no other tenants have been confirmed for the food hall.

So exciting! This is a much needed addition to that corridor and will hopefully inspire adjacent businesses to upgrade their exteriors.

Wishing them the best of luck in this location. I fear this type of development may be a few years too soon-now more than ever.

A bit of both. The density of the demographic needed to support a business like Veil doesn’t exist in this area. I wish there was a different story to tell but just take a short ride up the street and look at the Target/Publix development. There is vacancy after vacancy in this “prime” center and has not been very successful from inception. I’m familiar with Target’s numbers and they’re not impressive when compared to other Target locations in the area.
I wish Veil luck but time will tell. I stand by my earlier comments.