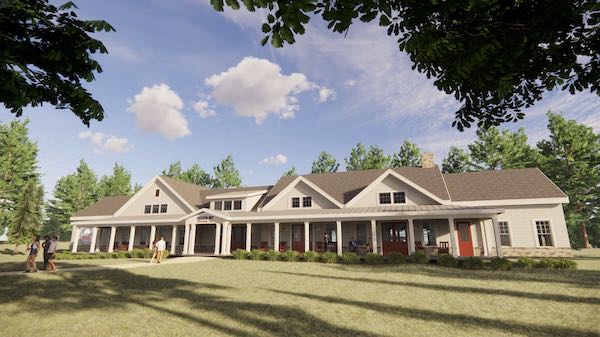 A rendering of the forthcoming brewery’s building.

The farm brewery is a joint venture from Kim and Butch Taylor, Jessica and Chad Ritter, and Brad Cooper. The Taylors own the nearby Titan Auto & Tire. Cooper co-owns Steam Bell Beer Works in Chesterfield and Canon & Draw Brewing Co. in the Fan. Jessica Ritter is a designer at Glave & Holmes Architecture and Chad Ritter is a brewer at Molly’s Blind Dog Brewery in Chester.

The quintet announced plans for Hidden Wit about a year ago with hopes of opening this year. But after slowdowns due to tweaking the brewery’s design and the pandemic, Butch said they’re just now finally starting work on the site. 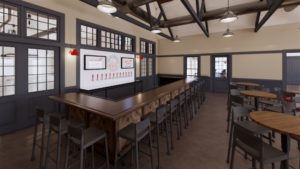 An interior rendering of the bar area with beer taps.

“We hope to be back on track real soon. The background work’s still been going on,” Taylor said. “Everybody’s really anxious to get going.”

Hidden Wit sits on 10 acres of agricultural land, and in March, Taylor said they installed a well there from which they’ll draw water to be used to brew. He said the next step is to get final site approvals from Chesterfield County in the next month or so.

“I’m hoping we can put a shovel in the ground in August,” Taylor said. Hidden Wit also hit a hiccup in receiving its funding from Touchstone Bank, which Taylor said put a temporary hold on dishing out loans while it waited for the economy to improve.

“From the get-go this project has grown and grown,” Taylor said. “It kind of demanded the extra space. It’s a 10,000-square-foot building now with an event space and full kitchen.” 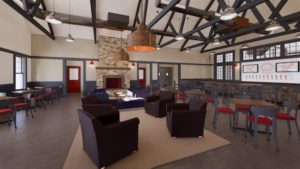 Taylor said they’re still working out the food menu and have been working with an unnamed chef consultant. He said he envisions Hidden Wit’s food menu having “high-end small plates.”

Once open, Taylor said they hope to push into distribution quickly, using a 20-barrel brewing system.

Taylor said they hope the $3.5 million project will be ready to open spring 2021. Titan Construction Group (not related to the Taylors’ auto company) is the general contractor, Glave & Holmes are the project’s architects and Campfire & Co. is handling branding.

Hidden Wit will be the region’s 39th brewery. The most recent arrival to the local scene is Powhatan’s Crazy Rooster Brewing Co., which opened in a limited manner in April and now is preparing to open its tasting room.

Excellent location. 4 miles west of Magnolia Green and the growing suburbs of Chesterfield and Amelia counties. It will one day be just a short drive of the Powhite Extension to 360.

Powhite Extension to 360 was just to get people to buy a home that direction.

A great dream but not going to be a reality that road has got to go through all those legal hurdles including but not limited to a road to which it will DESTROY the fresh water of thousands upon thousands of residents namely the reservoir – fresh water continuous to become scarce then it will be a road to nowhere if it happens. If the road goes through bye bye homeowners because no water.Period.