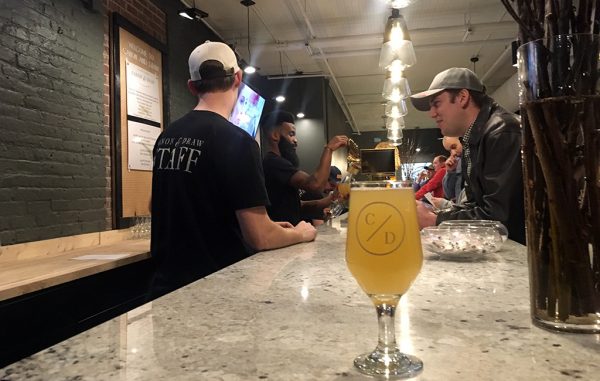 Canon & Draw Brewing Co. opened over the weekend in the Fan. (Mike Platania)

The fuse has been lit for the Fan’s sole brewery.

The taproom is located on the bottom floor of The Eclipse, a $3 million development by Blackwood Development and P&J Properties near the corner of West Main and Lombardy streets.

The brewery is debuting with about 10 beers on tap, including a tropical stout, a Hefeweizen, numerous IPAs and a lager dubbed River City Tap Water.

Canon & Draw brews with a seven-barrel system located near the front windows of the 5,000-square-foot space, bucking a common trend among breweries that typically put production areas in the back.

UrbanCore Construction was the builder for the space, with Perretz & Young as the architect and Campfire & Co. as the interior designer.

Above Canon & Draw in The Eclipse are 16 apartment units that were completed last year.

It’s been a busy winter for the Coopers, as they added several tanks for production at Steam Bell. With another 3,000 square feet of production space, Steam Bell is set to double its production capacity.

The next brewery that will hold a grand opening in the area is Hardywood, which is planning a weekend festival at its $28 million West Creek facility.

Other breweries en route to the Richmond area include Tabol Brewing, a 3,000-square-foot taproom in Northside, and Dogtown Brewing Co. and Manastoh Brewing, a pair of breweries in Manchester from developers and married couple Michael Hild and Laura Dyer Hild.

Correction: This story and headline have been revised to describe Canon & Draw as the only existing brewery in the Fan. An earlier version incorrectly referred to Canon & Draw as the first brewery in the Fan, but at least one other brewery has operated there: microbrewery Main Street Beer Co., which operated at 1911 W. Main St. in the early 2000s.