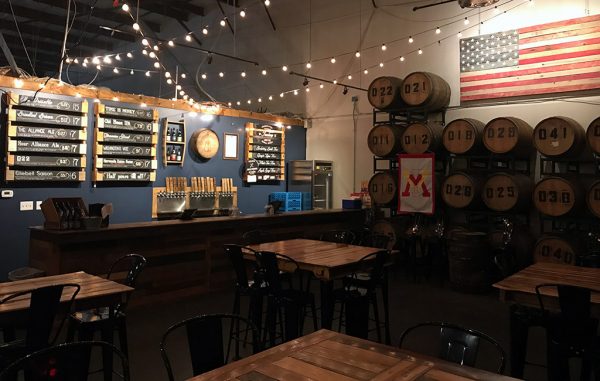 Ahead of opening a second taproom, a local brewery is beefing up its flagship facility in Chesterfield County.

The expansion will double the production capacity at the brewery, which siblings Brittany and Brad Cooper opened in summer 2015. It currently uses four 20-barrel tanks and is adding three 30-barrel tanks.

Brad Cooper said Steam Bell has been selling most of its beer out of its Midlothian taproom, but has signed with Brown Distributing. The increased capacity will help it expand on the wholesale side of the business.

“We’ve been kind of sporadic in distribution, just in the central Virginia market, because our capacity is so low,” he said. “We knew we wanted to make a push into the wholesale market.”

In addition to brewing volume, Brittany said, the new space will provide room for storing barrel-aged beers and the Coopers said they’re working with their brewers and Brown Distributing on another flagship beer that’ll be announced in coming weeks.

The added space also will allow Steam Bell to can its Trussings Craft Fizz, a brand of soda it makes in house. It launched Trussings in 2016 and makes four flavors: berry basil, ginger lime, apple sage and mint tea.

“It kind of took off,” Brittany said of Trussings. “I think what we started seeing is, folks would come into the tasting room, have a couple glasses and want to take it home.”

Steam Bell is planning to use Iron Heart Mobile Canning for Trussings, and is looking into an in-house bottling line for beer.

“We’re speaking with a couple manufacturers for something a little more automated. We’re using the same model bottle filler that I started with as a volunteer at Hardywood,” Brad joked.

Eastward in the city of Richmond, the Coopers are finishing work on Canon & Draw Brewing Co., a satellite taproom at 1527-29 W. Main St. in the Fan. They hope to open the space in early March.

Steam Bell joins a number of other brewers adding space to their facilities in recent months.

Ardent Craft Ales has doubled its brewing capacity as it prepares to expand its distribution footprint, and Stone Brewing and Kindred Spirit Brewing also added tanks.

Final Gravity Brewing Co. added some square footage over the summer, and The Answer Brewpub is adding an outdoor patio to its facility on Broad Street.

Castleburg Brewery and Taproom, located near the Diamond at 1626 Ownby Lane, is also in the process of doubling the size of its taproom.