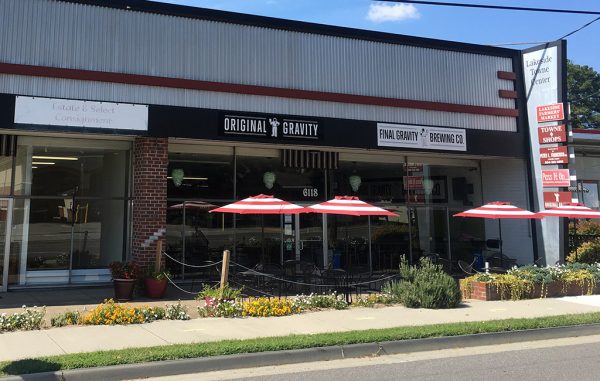 After blasting off two years ago, Lakeside’s lone brewery is spilling over into more space.

Final Gravity Brewing Co. is expanding its taproom as it plans to move its sister home-brewing supply shop, Original Gravity, next door within Lakeside Towne Center.

Original Gravity will move to 6116-B Lakeside Ave., into part of Pass It On Consignment, which is rebranding to JuJuBee’s. Final Gravity’s brewery and taproom will take over the full 5,000 square feet available at its space at 6118 Lakeside Ave.

Owner Tony Ammendolia said work is underway to add a door between the two storefronts to provide access to Original Gravity’s supplies, which include everything from hops to fermenters to bottling equipment.

He said the popularity of Final Gravity’s taproom was what motivated the expansion. The brewery celebrated its second anniversary last weekend. 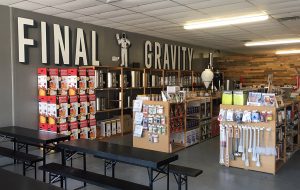 Final Gravity will move its home-brew supplies next door to the taproom. (Mike Platania)

“When we get busy pouring, our customers for supplies don’t get the attention they need,” said Ammendolia, who opened Original Gravity in November 2011.

With the supplies cleared out, Ammendolia said, the company will add a room for overflow seating.

“We want it all done as soon as possible, ideally before the holidays,” he said.

Ammendolia said the company’s revenue is nearly an even split between the brewery and homebrew supplies.

The brewery isn’t signed on with a distributor, though its beer is available outside the taproom via beer-delivery startup Flight.

As for what’s next for Final Gravity, Ammendolia said he’s mulling the idea of a larger brewing system, but hasn’t committed to anything.

“We’re pretty much maxed out now,” Ammendolia said of his two-barrel brewing rig.

[…] biggest purveyor of homebrewing products is making moves of its own. Final Gravity Brewing Co. is expanding its taproom at 6118 Lakeside Ave. and moving its homebrew shop, Original Gravity, next […]

[…] nearby with Scott’s Addition’s bevy of brewers, Hardywood and Castleburg near The Diamond, and Final Gravity in Lakeside, among […]