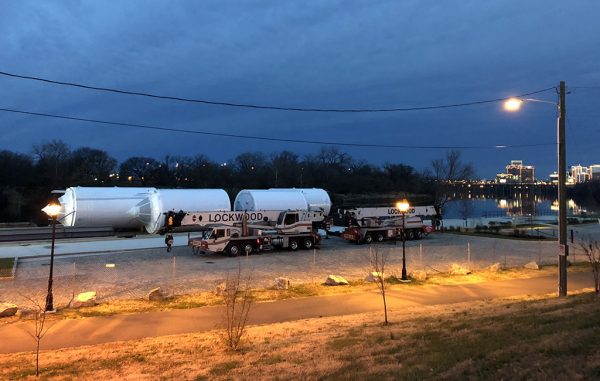 The tanks departed from Germany and arrived via barge in Richmond Wednesday night. (Juliellen Sarver/Stone Brewing)

Just over a year after staking Richmond as its East Coast hub, Stone Brewing is beefing up its capacity.

The California-based brewery on Thursday brought four 1,000-barrel tanks to its facility at 4300 Williamsburg Ave. in Fulton.

The new hardware puts Stone’s system at a 250-barrel brewing system – among the largest beer operations in Richmond. Comparatively, one of the area’s smaller breweries, Final Gravity Brewing Co., operates a two-barrel system.

Stone’s Richmond operation is on track to brew about 100,000 barrels, or 3 million gallons of beer this year, accounting for about 25 percent of the company’s total production.

The brewery, for which the city and state laid out a $30 million incentive plan, also is adding to its staff. 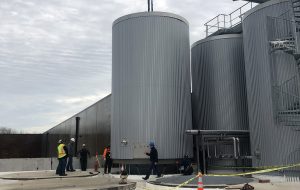 “One of the key pieces for our increased production is that we just started our new canning line … We were always slated to get (the canning line), just didn’t know if it’d be this early,” Martin said. “(Stone beers) Tangerine Express and Ripper are coming in cans soon. Cans are a growing segment in packaging for craft beer.”

The brewery announced in September more details of its planned Stone World Bistro and Gardens, which will take over the former Intermediate Terminal building on Wharf Street.

Baskervill has been tapped as the architect of that project, which Martin said he believes will open in early 2019.

Other local breweries to up their capacity recently include Ardent Craft Ales, Kindred Spirit Brewing and The Veil Brewing Co.