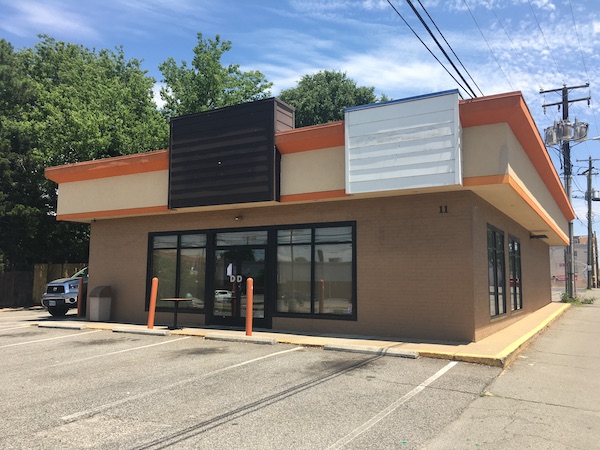 Dunkin’ permanently closed its Carytown location last week. The franchisee wants to open a new location in Carytown with a drive-thru. (Jack Jacobs)

A donut chain has ditched the Carytown location it’s called home for almost a decade, with an eye toward relocation within the neighborhood.

The Dunkin’ store at 11 S. Nansemond St. permanently closed Friday. The location, which also featured a Baskin-Robbins, opened in 2012.

Greg Nigro, owner of the franchise through his Restaurant Services of the Outer Banks, said he’s looking to find a new spot in Carytown with a drive-thru.

“We’re committed to Carytown. It just wasn’t performing as well as it would with a drive-thru,” Nigro said. He said it wasn’t an option to build a drive-thru at the Nansemond Street location.

Nigro’s company owns and operates Dunkin’ and Baskin-Robbins locations in Richmond, eastern Virginia and northeastern North Carolina. It has 40 locations, 13 of which are in the Richmond area.

Whether or not the new Carytown location will have a Baskin-Robbins is to be determined, contingent on the layout of the property the franchisee is able to land. Nigro said he’s looking for a space and the timeline on opening is dependent on how long that takes.

“It’s 100 percent based on finding the right property,” he said.

The Dunkin’ on Nansemond Street, the chain’s first location in the city, found itself in the middle of a legal battle in early 2013, when Dunkin’ and Baskin-Robbins sued the owners of 10 central Virginia locations after they fell behind on franchise fees and rent. The Carytown location and others closed temporarily during the legal battle and reopened under new management.

Restaurant Services of the Outer Banks acquired the Carytown location in 2016, buying it from Andy Rod of Charlottesville for an undisclosed amount, Nigro said.

The property, which features a 3,000-square-foot restaurant space, is owned by an LLC tied to Dunkin’ Brands Group Inc., which is the parent company of Dunkin’ and Baskin-Robbins. The property was purchased for $460,000 in 2011, according to city records.

Dunkin’ isn’t the only restaurant chain that’s left a hole in the neighborhood. The Panera across the street at Carytown Place shopping center also closed permanently.

The departure of the eateries frees up space in the immediate vicinity of The Carytown Exchange, a new retail development of 120,000 square feet rising on the former site of Richmond Shopping Center. Florida-based Regency Centers is behind the $40 million project.

I could see that building either demolished or reconfigured for a drive through but I am not sure I want to see another store front torn down for a drive thru nor do I want to see that land that the Exchange as delayed that front on Cary Street that was to be traditional storefront sold off as retail pads to look like West Broad Street.