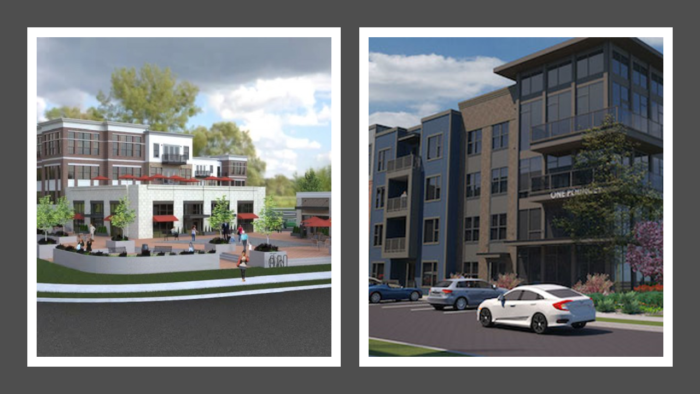 Two mixed-use developments proposed at prominent crossroads on opposite sides of Short Pump are slated to receive initial scrutiny from Henrico planners this week.

The larger of the two, a project from Blackwood Development called One Pouncey, would put 295 apartments and 40,000 square feet of commercial space at 4545 Pouncey Tract Road, a 10-acre tract at the southeast corner of Pouncey Tract Road and Twin Hickory Lake Drive.

About two miles south, Rebkee Co. has filed plans for the final piece of a years-in-the-making mixed-use community called The Shire, with 225 apartments and 18,500 square feet of commercial space planned for 8 acres on the west side of John Rolfe Parkway at its intersections with Pump and Church roads.

Both projects are on the agenda for the county Planning Commission’s meeting this week. Hirschler attorney Jim Theobald is representing both developers in their requests, both of which seek rezoning and provisional-use permit approvals that are ultimately decided by county supervisors.

Blackwood, whose other developments include Winterfield Crossing in Chesterfield and a redevelopment of the former Infuzion Dance Club in Scott’s Addition, is planning One Pouncey to consist of seven buildings on the 10-acre site at Pouncey Tract Road and Twin Hickory Lake Drive.

The project would be built in phases, with an initial phase estimated at $40 million with about 200 apartments, said Blackwood principal Nolen Blackwood. 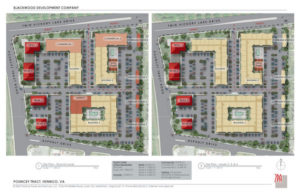 A site plan for One Pouncey. Click to enlarge.

He said the firm previously eyed the One Pouncey site for a retail center but opted instead for a mix of uses near the residential Twin Hickory neighborhood. The land is owned by Richard Nuckols’ Pouncey Place LLC, which Blackwood said his firm bought into about 10 years ago.

Blackwood is seeking a rezoning from B-2 Business District to R-6 General Residence District, which allows for multifamily residential use. The provisional use permit would allow the commercial uses.

Blackwood said One Pouncey is being designed with a walkable, neighborhood feel similar to Markel | Eagle Partners’ nearby GreenGate development on West Broad Street.

Blackwood said they want the 10-acre project to be walkable and have a neighborhood feel.

“We definitely want to have a significant amount of amenities, both internal and external … going for the neighborhood vibe of being walkable and pedestrian-friendly is our mindset,” Blackwood said.

Most of the 295 apartments would be one- or two-bedrooms, with some three-bedroom units proffered for the project. Plans also show a dog park, shared work space, pool and 476 parking spaces. Blackwood said units at One Pouncey would be at the top end of rental rates.

“We’re going for some of the empty nesters from Twin Hickory and the younger crowds as well, the professionals that may not want to be in the city,” he said. 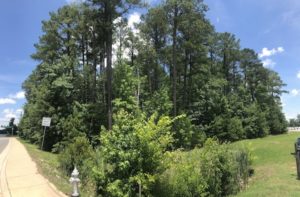 Much of the plot is wooded. The intersection of Pouncey Tract and Twin Hickory Lake Drive is seen to the left. (Mike Platania)

The site currently houses a car shop and a dog kennel that Blackwood said wouldn’t be impacted by the first phase but may need to move eventually. Most of the site’s 10 acres are wooded.

Blackwood said he hopes to break ground in 2021 on the first phase, which would take between 14 and 18 months. Poole & Poole Architecture is the project’s designer. Blackwood said a general contractor has not been selected. 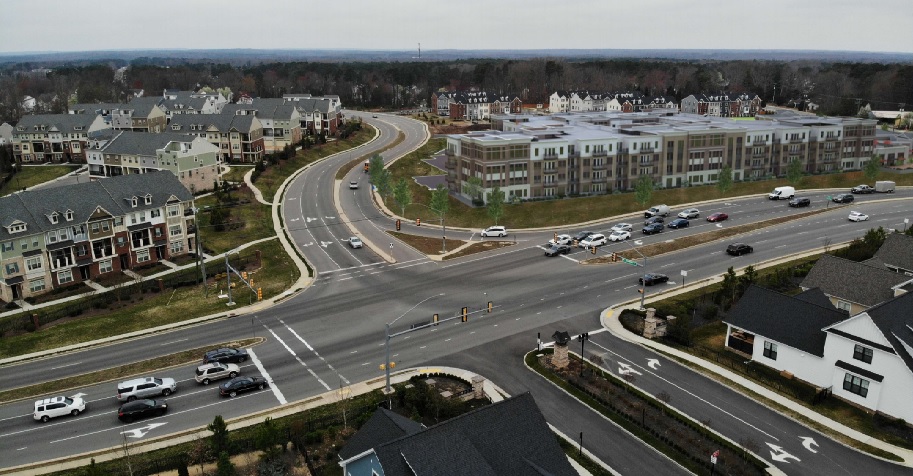 At The Shire, parts of which have taken shape in recent years with Markel | Eagle’s Shire Place townhomes and John Rolfe Square condominiums, Rebkee is planning a mix of market-rate apartments and “small, neighborhood” businesses to fill the remaining vacant land along John Rolfe Parkway.

The one- and two-bedroom apartments, described on a project website as “upscale,” would average 800 square feet in size, and include balconies and walk-in closets. Community amenities would include an interior courtyard with pool, clubroom, fitness room and a Wi-Fi café. 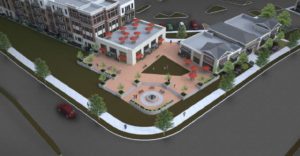 A rendering of a restaurant at The Shire.

The four-story buildings’ facades would include brick or stone and HardiePlank-style siding. Outdoor spaces would include sidewalks and landscaping, and a one-story retail building would adjoin the apartments, with space planned for a restaurant with a patio for outdoor dining. The rest of the retail space would be filled with neighborhood-oriented businesses.

Rebkee has been planning the development for years, following Henrico’s realignment of the Pump and Church crossroads when it extended John Rolfe Parkway to connect with West Broad Street. The redesign and associated rezonings were intended to encourage a mix of development that would result in a walkable, urban village-style community.

Attempts to reach Rebkee principals Rob and Dan Hargett were unsuccessful last week. In 2014, fellow principal Kevin McFadden told BizSense they were in talks with retailers for what then was envisioned to be a 70,000-square-foot commercial development estimated at $10 million. Uses considered at the time included a bank branch, pharmacy and retail shops. 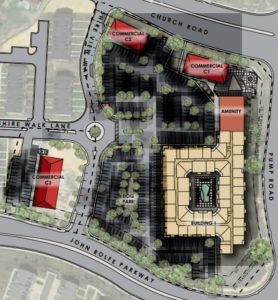 A site plan of the development.

County planning staff describes Rebkee’s latest proposal as “a deviation from the development plans approved in the past,” referring to a larger mixed-use development proposal in 2006 that rezoned 21 acres, including the Rebkee site, which initially was approved for a commercial shopping center. A staff report states the department is generally supportive of the project, though it recommends deferring the case until Rebkee can hold a community meeting on its plans.

Rebkee’s other projects in Henrico include its redevelopments of two of the county’s shopping malls: Regency Square, with Thalhimer Realty Partners, and Virginia Center Commons, which it’s planning to rehab in collaboration with Shamin Hotels.

The Planning Commission’s meeting is scheduled Thursday at 7 p.m.

Rebkee and Blackwood made their fortunes in retail development. They have made the leap into apartment building, but both have stayed true to their roots with a retail component in each project. I expect to see several more announcements soon from each developer as they are sitting on some valuable land.

more vertical density.ugh.
the only way you can go in the west end now.