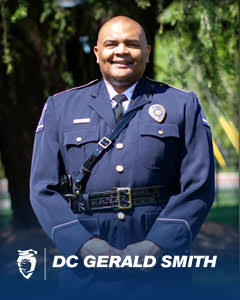 Mayor Levar Stoney named Deputy Chief Gerald Smith of the Charlotte-Mecklenburg County Police Department as Richmond’s new police chief. He started July 1 and replaces William “Jody” Blackwell, who is returning to his former position of major after being named interim chief upon the resignation of previous chief William Smith, who resigned in late June at Stoney’s request.

At Charlotte-Mecklenburg, Gerald Smith served as executive officer of investigative services, commanding criminal investigations including domestic violence, crimes against children, sexual assault and homicide. He had been with the North Carolina department since 1991.

The chief changes came in the wake of recent protests that in some instances resulted in officers using tear gas on demonstrators, in one case before a city-enforced curfew took effect. Stoney and City Council have since discussed reforms for the Richmond Police Department that are slated to be discussed at a committee meeting this week.

Richmond City Council’s Organizational Development Standing Committee meets Monday at 5 p.m. The agenda for the meeting can be found here. 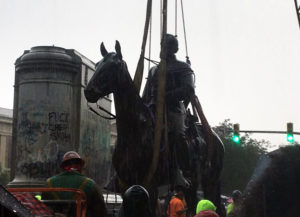 The Stonewall Jackson statue on Monument Avenue was removed from its perch last week. (Submitted photo)

Business includes an update from the city attorney on statue and monument removals, and discussion of proposed police reforms including establishment of a civilian review board, a formal crisis alert system to address calls about mental and behavioral health crises, a taskforce for reimagining public safety and a community engagement strategy.

Input sought on civilian review board for Henrico police; chief to retire

Henrico supervisors are seeking public input on the potential creation of a civilian review board for the county’s police division. The county will accept comments from Henrico residents through July at [email protected] Residents are encouraged to provide their name and home address with their comments.

The board has been receiving public input on establishing a civilian board that would provide oversight of the police division and is encouraging further community discussion following recent police killings of Black Americans, including George Floyd in Minneapolis. The county expects to defer any action on a review board until after the Virginia General Assembly considers the issue for possible statewide implementation in late summer, according to a release.

On June 22, Henrico police chief Humberto “Hum” Cardounel Jr. announced he will retire effective Sept. 1 after nearly 32 years career with the division and four years as chief. The county said it will conduct a national search for its next police chief and aims to fill the position by Sept. 1.

A Freeman High School and UR graduate with a master’s in public administration from VCU, Cardounel will take advantage of Henrico’s Voluntary Retirement Incentive Program, a cost-cutting measure made available during the COVID-19 pandemic that offers enhanced benefits to eligible employees who elect to retire.

The Richmond Planning Commission meets Monday at 1:30 p.m. Business on the agenda includes a rezoning request from Mark Baker with Baker Development Resources to allow an infill development at 3307 and 3311 Cutshaw Ave. The rezoning would allow two-family dwellings to be added to the alley side of existing four-unit dwellings. Full agenda here.

Business on the agenda includes rezoning and permit requests from Rebkee Co. for a mixed-use development on 8 acres on the west side of John Rolfe Parkway at its intersections with Pump and Church roads. The development, part of a long-planned community called The Shire, would consist of up to 225 apartments and 18,500 square feet of commercial space.

Blackwood Development is making similar requests for 295 apartments and 40,000 square feet of commercial space at 4545 Pouncey Tract Road. The project, called One Pouncey, would fill a 10-acre tract at the southeast corner of Pouncey Tract Road and Twin Hickory Lake Drive.

Other business includes two cases that were deferred from the May 14 meeting, including Godsey Properties’ zoning request for a nearly 100-acre mixed-use development with townhouse and business uses along East Williamsburg Road north of its intersection with Dry Bridge Road. The zoning involves land near the Interstate 64 and 295 interchange that was sold in 2018 and Godsey is under contract to purchase.

The other case involves Stanley Martin Homes and Wilton Acquisition LLC seeking approvals for a residential development with townhomes and houses on 32 acres north of Scott Road between Interstate 95 and Aberdeen Street. The land is just south of the site of Stanley Martin’s approved ReTreat at One development, totaling 500 homes east of Brook Road.

Business on the consent agenda includes an agreement for the county to purchase three parcels at 0, 2950 and 2952 River Road West from an LLC tied to Richmond attorney John Lumpkins for $299,000. The nearly 1-acre property adjoins the county courthouse complex and currently houses an auto center with six underground storage tanks.

The board will meet in closed session to discuss recruitment of a new county attorney following the departure of John Budesky, who started as administrator for Hanover County on July 1. Business on the regular agenda includes a permit request from Benedictine Society of Virginia to allow additional buildings and water allocation at its 50-acre campus at 12829 River Road.

The county Planning Commission meets Thursday at 6:45 p.m. Business includes a permit request from Martin Marietta Materials to relocate its existing processing plant and equipment and construct new office space at 1916 Ashland Road. The permit also would allow for storage of dirt removed from the active Anderson Creek Quarry nearby. Full agenda here.

Henrico County sold its last set of general obligation bonds to support capital-improvement projects identified in the 2016 bond referendum. With the $121.4 million sale on June 16, the county’s triple AAA bond ratings were reaffirmed, and the county earned its lowest interest rate on record: 1.49 percent for the 20-year bonds. The rate was previously 1.96 percent.

Proceeds from the bond sale will be used as follows: $57.9 million for school projects, including the new J.R. Tucker High and Highland Springs High schools and a renovation of Adams Elementary School; $8.2 million for improvements to Richmond-Henrico Turnpike; $12.2 million for a new firehouse for the Eastgate/New Bridge area; and $43.1 million for recreation and parks facilities, including Taylor, Cheswick, Three Lakes and Tuckahoe Creek parks and turf fields at various high schools.

The sale was the fourth and final sale from the 2016 referendum, which is providing $418.9 million to reinvest in new and improved capital facilities. Voters approved bond debt of $272.6 million for schools, $87.1 million for parks, $24 million for libraries, $22.1 million for fire facilities and $14 million for roads.