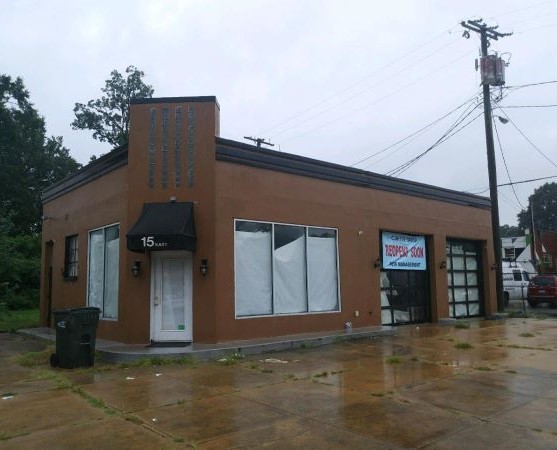 Smoky Mug, a cafe-and-barbecue restaurant, plans to open in the Northside in October. Smokey Mug is taking over the space formerly occupied by Black Hand Coffee Co. (Photo by Jack Jacobs)

The Brookland Park neighborhood is about to get a new coffee shop and smoked meats will also be a key ingredient.

The Smoky Mug is expected to open next month at 15 E. Brookland Park Blvd., a space formerly occupied by Black Hand Coffee Co.

The café-barbecue joint combo is led by co-owners Dan Lee and Ryan Maynes.

Lee is the vice president of sales at Savage Apparel Co., located next door to the future Smoky Mug spot. It was the departure of Black Hand from the neighborhood that motivated Lee to consider launching his own coffee venture there.

“I felt a coffee shop was important for the neighborhood and this commercial corridor. I wanted to go in and take a stab at it,” he said.

Smoked meats entered the equation after Lee started having conversations about his coffee idea with Maynes, an avid at-home smoker who had designs on opening his own restaurant. The duo decided to combine their concepts.

The coffee shop-restaurant combo is designed to adapt to the pandemic times that have upended the traditional restaurant experience. Smoky Mug will be focused on takeout, and a patio space will be added to the property, though the exact size hasn’t been determined yet. There will be limited seating indoors — three tables, along with counter service for the barbecue side of the business.

The barbecue menu hasn’t been ironed out yet, but it will be built around brisket offerings. It will feature other proteins and vegetarian options. Sandwiches will likely be under $10, while other entrees will probably range from $10 to $20. Ingredients will be smoked in-house. The cafe won’t roast its own coffee, co-owner Dan Lee said.  It will offer coffee sourced from vendors.

Smoky Mug expects to begin to serve barbecue shortly after it opens its cafe, Lee said.

While Lee plans to split his time between Savage and Smoky Mug, Maynes will run the restaurant full time.

Black Hand recently left the 1,500-square-foot space it had occupied since 2017. Black Hand left Northside because it moved production operations out of the space and to Charlottesville, and no longer needed the space, Black Hand owner Clay Gilbert said.

The coffee company continues to operate a cafe in the Museum District.

In other local coffee scene news, Grit Coffee opened its first Richmond location in September, taking up a space in the Libbie-Grove corridor. Ever Better Coffee Co. plans to open in the Fan soon, and Blanchard’s Coffee Roasting Co. has designs on Lamplighter’s former space in the Fan.

And in the barbecue world, Stump’s Pig & Pint has left Jackson Ward and is now a mobile operation in search of an eventual restaurant space. RVA BBQ Tours recently launched its tour concept focused on barbecue. Dun’s Bar-B-Que, a longtime Henrico County smokehouse, has shuttered.

Dunn’s is slated to reopen as Dean’s BBQ in the near future. Looking forward to seeing all this develop.