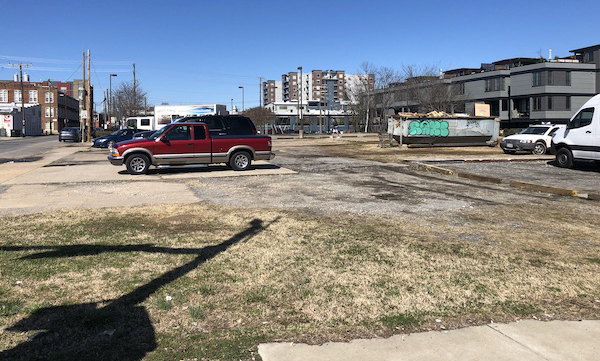 A 173-unit apartment building is planned for this 1-acre parcel in Manchester. (Mike Platania photo)

The number of new apartments headed to Manchester continues to skyrocket with another sizable project on the way.

The 15-year-old firm is planning a 173-unit mixed-use building at 15 W. 7th St. Dubbed the Manchester Commodore, it would be Capital City’s first in the Richmond region.

“While initially focused on infill condo projects in D.C., we are currently developing rental apartments in Georgia, Maryland and Virginia,” said Chris Love, Capital City’s director of acquisitions and development.

Plans filed last month show the building would rise on a pair of surface parking lots along West Seventh Street and between Hull and Bainbridge streets. The 1-acre parcel is currently owned by local developer Jeremy Connell, who bought the land for $350,000 in 2011.

It’s unclear whether Capital City is under contract to purchase the land.

Signage for the planned mixed-use building to be built along West Seventh Street.

Planning documents show the Commodore would be a 5-story, S-shaped building totaling 182,000 square feet. The majority of the square footage would be made up of 173 apartments, with a 3,500 ground-floor commercial space being the exception.

Below the building would be a two-level parking deck with 234 spaces. Amenities at the Commodore would include a courtyard, garden and pool.

Odell Associates is listed as the project’s architect and Kimley-Horn as its engineer. The land’s zoning, B-7 Mixed-Use Business District, allows for the project to be built by right.

Capital City’s project would be the latest addition to the thousands of apartments going up in Manchester.

Other current projects include Tom Papa’s The Box, a 118-unit apartment building on Decatur Street and a 221-unit building from South Carolina-based The Beach Cos.  across from Legend Brewing.

Lynx Ventures is preparing to welcome residents this summer into The Current, a 215-unit, mixed-use building at 400 Hull St. that recently landed its first office tenant, while another 250-unit, 12-story building is also being planned for 201 W. Commerce Road.

This is more good news for Manchester overall and the Hull Street corridor in particular, where a number of new residential projects are in process. Tremendous momentum in Manchester – and I’m looking forward to more.

Manchester is redhot with development. Some say it’s a good thing, others think it’s too much too soon. I think some enterprising grocer should take a good hard look at building a 20,000 sf store in the District. There’s a lot of food to be sold there soon.

all this development is good news for manchester of course. This is what is necessary to drive amenities, which the area is still lacking in. Currently a totally underserved market

Good job Richmond turning a dead half abondonedend parking lot into more housing without cutting down a single tree.